Ian Foster handed the All Blacks captaincy to veteran lock Sam Whitelock, selected four new caps and devised a patchwork solution to a shortage of midfield options in his 35-man squad for home tests next month against Tonga and Fiji.

With his most experienced midfield duo of Anton Lienert-Brown and Jack Goodhue both injured and with Ngangi Laumape about to leave to play in France, Foster faced a lean choice of candidates at Nos. 12 and 13 for New Zealand.

Foster announced the squad on Monday. 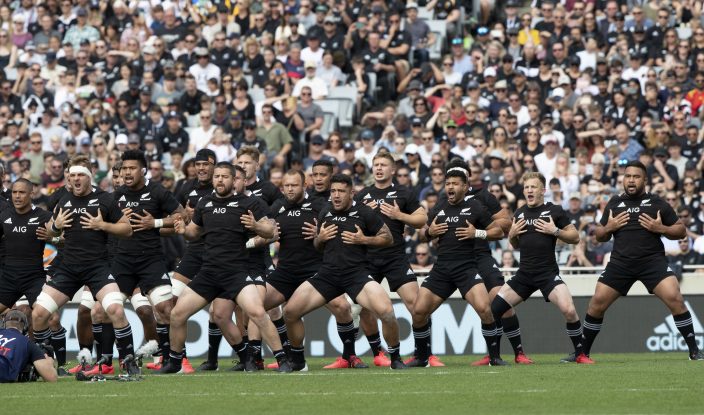 FILE - In this Oct. 18, 2020, file photo, the New Zealand team performs the haka ahead of the second Bledisloe Rugby test between the All Blacks and the Wallabies at Eden Park in Auckland, New Zealand. All Blacks coach Ian Foster has handed the captaincy to veteran lock Sam Whitelock, named four new caps and come up with a patchwork solution to a shortage of midfield options, naming a 35-man squad Monday, June 21, 2021 for home tests in July against Tonga and Fiji. (AP PhotoMark Baker, File)

Goodhue is likely out for the season after rupturing knee ligaments but Lienert-Brown may be back in time for the second Fiji test after undergoing elbow surgery. Laumape, who is widely regarded as New Zealand’s form No. 12 this season, has been repeatedly overlooked by Foster. After being offered a reduced contract by New Zealand Rugby, he has decided his future lies elsewhere.

Foster has followed the Crusaders in moving David Havili to center from fullback, where he last played for the All Blacks four years ago. He has again switched Rieko Ioane from the wing to center, though the experiment failed the last time it was tried at international level.

Foster still has Braydon Ennor in the squad and has called on the uncapped Chiefs’ center Quinn Tupaea.

Foster’s wing and fullback options are comparatively abundant with Jordie Barrett and Damian McKenzie and the Crusaders trio Sevu Reece, George Bridge and Will Jordan. Another Crusader, Leicester Fainga’anuku, has missed out after an outstanding Super Rugby season.

Richie Mo’unga and Beauden Barrett will share or vie for the flyhalf role while the Blues’ Scotland-born scrumhalf Finlay Christie gets his first callup beside Aaron Smith and Brad Weber.

Whitelock will be rejoined by his regular locking partner Brodie Retallick, who is back from Japan and restores New Zealand locking depth. He takes over the captaincy from Cane, who is sidelined with a pectoral muscle injury.

“He’s hugely experienced, not just as a player but also as a leader and he has great connections with Sam Cane and the leaders in the team as well,” Foster said. “Our current leadership group is working hard together and we know Sam will lead the team superbly.”

Foster likely will try different backrow combinations in the three July tests, likely giving a chance at some stage to the uncapped Crusaders flanker Ethan Blackadder, son of former All Blacks backrower and Crusaders coach Todd Blackadder. He has a wide range of options including the Blues’ Akira Ioane, Hoskins Sotutu and Dalton Papalii and the Chiefs’ Luke Jacobson.

Scrummaging hasn't been a strength for most New Zealand teams in Super Rugby trans-Tasman but the Blues’ Karl Tu’inukuafe and Nepo Laulala have been solid. Tighthead Ofa Tuingafasi and loosehead Joe Moody are missing with injuries. Foster has called up the 22-year-old Highlanders prop Ethan de Groot, who has made a big impression in his first full Super Rugby season.