A former top adviser to King Abdullah II and a relative of the monarch went on trial at Jordan's state security court on Monday, state media reported. The two face sedition and incitement charges revolving around an unprecedented public rift in the royal family.

The defendants are accused of conspiring with a senior royal — Prince Hamzah, a half-brother of the king — to foment unrest against the monarch while soliciting foreign help.

The trial began under tight security and was closed to the media. 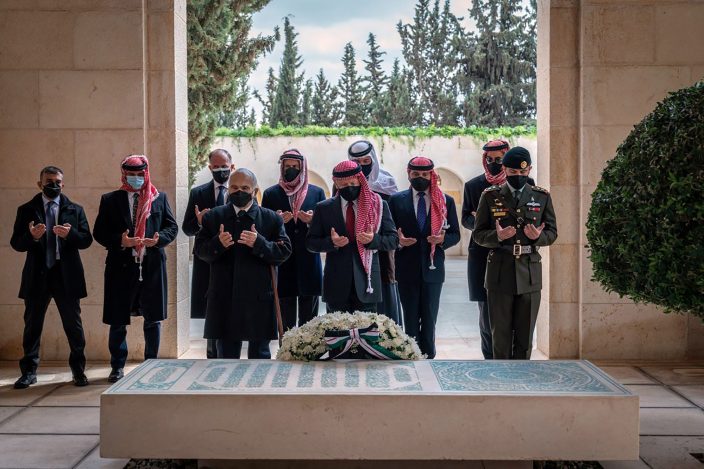 FILE - This April 11, 2021 file photo from the Royal Court twitter account, shows Jordan's King Abdullah II, center, Prince Prince Hamzah, second left, and others during a visit to the tomb of the late King Hussein, in Amman Jordan. Jordan's version of a trial of the century gets under way as early as Monday, June 21, 2021. A relative of King Abdullah II and a former chief of the royal court will be ushered into the defendants’ cage at the state security court to face sedition charges. They are accused of conspiring with Prince Hamzah, a half-brother of the king, to foment unrest against the monarch. (Royal Court Twitter Account via AP, File)

Hamzah is not facing charges, with the king having said the royal family is handling the matter privately. Yet he is the central figure in the highly anticipated trial and defense attorneys said they plan to call him to the stand.

Since the drama erupted into the open in early April, with Hamzah being placed under house arrest, clashing narratives have swirled around the popular prince. He is either a champion of ordinary Jordanians suffering from economic mismanagement and corruption, or a disgruntled royal who never forgave Abdullah for taking away his title of crown prince in 2004.

The indictment, leaked to state-linked media and expected to be read in court Monday, alleges Hamzah was driven by personal ambition and determined to become king. It says the prince and the defendants — Sharif Hassan bin Zaid, a royal, and Bassem Awadallah, a former royal adviser — conspired to stir discontent.

Awadallah, who has Jordanian, U.S. and Saudi citizenship, held senior posts in Jordan, including head of the royal court and planning minister. Later, he served as the king’s official envoy to Saudi Arabia and has close ties to Saudi Arabia’s powerful crown prince, Mohammed bin Salman.

Bin Zaid is a distant cousin of the king.

They are the most senior establishment figures to appear before the security court, which typically goes after drug offenders or suspected militants.

A video leaked from inside the court showed Awadallah, wearing the light blue uniform of detainees and a mask as he was led by guards through a room in the court. State media ran the footage and stills photos of Awadallah on their websites.

Since the royal rift became public, it has broken taboos in Jordan and sent jitters through foreign capitals, with Western powers rallying behind Abdullah, an indispensable ally in an unstable region.