Israel on Monday eased some restrictions on the Gaza Strip that have threatened a fragile cease-fire, Palestinian officials said. Hamas, however, said the move was really Israel's attempt to pressure the militant group into making concessions.

The officials, who spoke on condition of anonymity because they were not authorized to talk to the media, said 11 truckloads of clothes were exported through Kerem Shalom crossing for the first time in 40 days. On Sunday, Israel said it will allow limited agricultural exports from Gaza.

The easing also included the resumption of mail service in and out of Gaza, according to Saleh al-Zeq, an official from the Palestinian Authority’s liaison committee. Since the 11-day war in May between Israel and Gaza’s Hamas rulers, thousands of Gazan passports and other essential paperwork had been delayed. 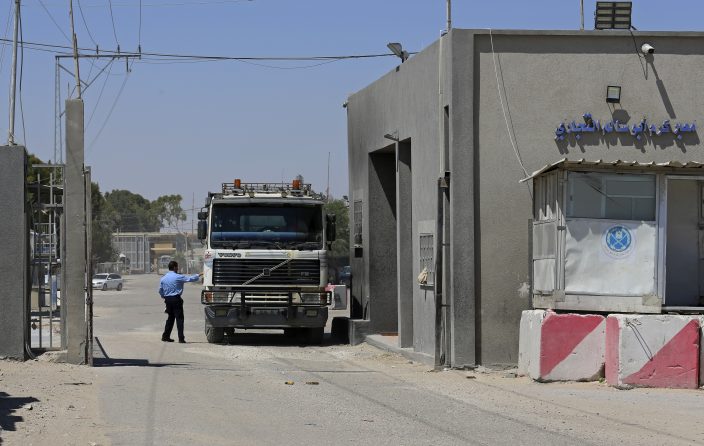 A Hamas security officer checks a truck entering Gaza at the gate of the Kerem Shalom cargo crossing with Israel, in Rafah, southern Gaza Strip, Monday, June 21, 2021. Israel on Monday eased some restrictions on the Gaza Strip that have threatened a fragile cease-fire which halted an 11-day war last month with the territory's Hamas rulers, Palestinian officials said. (AP PhotoAdel Hana)

Still, Hamas' Gaza leader Yehiyeh Sinwar drew a grim picture for the future of the cease-fire that went into effect on May 21.

“Unfortunately, there are no signs indicating the existence of intentions to resolve the humanitarian crisis in Gaza,” Sinwar told reporters in Gaza City.

He added that Israel was “blackmailing” Hamas in exchange for further lifting of restrictions. 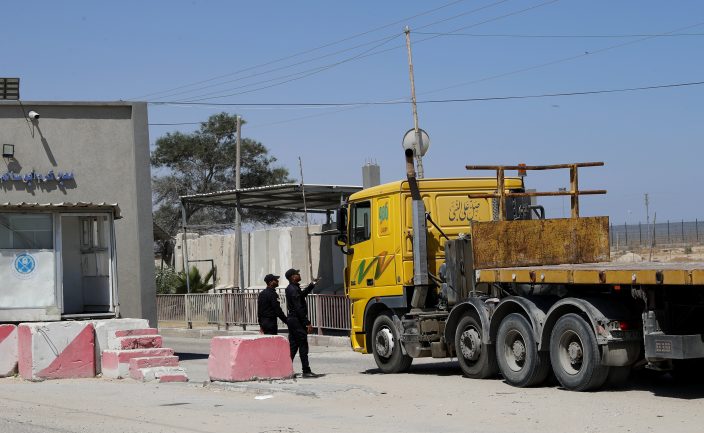 Sinwar was apparently referring to Israel’s position that a major improvement in Gaza hinged on Hamas releasing two Israelis and the bodies of two soldiers it holds captive. Sinwar said he told the United Nations' top regional envoy, Tor Wennesland, that Hamas “will not accept that,” describing the meeting as “very bad.”

Other restrictions by Israel remain in place and are taking a toll on different sectors in Gaza.

On Monday, a Pepsi bottling plant said it was closing and laying off 250 workers because raw materials needed to stay in business are being kept away. Instead, the company will import ready-made products from its factory in the West Bank.

“The raw materials have not been allowed. We have been waiting for them for 60 days,” said Hammam Alyazji, development manager at the factory. The materials include carbon dioxide and syrup.

The resumption of exports does not include fish, said Nezzar Ayyash of the fishermen union. He said Israel reduced the fishing by more than half, keeping it at six nautical miles. “This is very bad for the livelihood of fishermen; buying power is low in Gaza and the fishermen barely make up their fuel expenses,” he said.

Other restrictions include a limit on the number of medical patients who can get treatment in Israel or the West Bank.

Egypt brokered the cease-fire, ending the fourth war between Israel and Hamas since the militant group seized power in Gaza in 2007.

Hamas has been calling for significant easing of the blockade. Last week, Hamas-linked activists launched incendiary balloons across the border, burning farmland and triggering Israeli airstrikes despite the cease-fire. Egypt is continuing its efforts to cement the shaky truce.

On Sunday, Israel’s new prime minister, Naftali Bennett, warned Hamas that Israel would not tolerate even minor attacks from Gaza.

The war started when Hamas fired salvos of rockets toward Jerusalem and other Israeli towns last month. Hamas says the attacks were a response to Israeli police raids and heavy-handed policy against Muslim worshippers at Jerusalem’s Al-Aqsa mosque and planned evictions of Palestinian families from an Arab neighborhood.