In the eyes of the law, pets are property when it comes to divorce, but new ways of working out custody of the dog, cat or parrot have sprung up with special mediators and “petnups” to avoid courtroom disputes.

Alaska, California and Illinois are among states that have enacted laws giving judges leeway to consider the best interests of pets, not unlike what they do for children. A bill is pending in New York state to take the same approach.

“Someone's cat or someone's dog is a part of their family and should not be treated like a piece of furniture or their Honda Civic,” said Sen. James Skoufis, chief sponsor of the New York measure and proud dad to a cat named Ruth, for the late Ruth Bader Ginsburg. 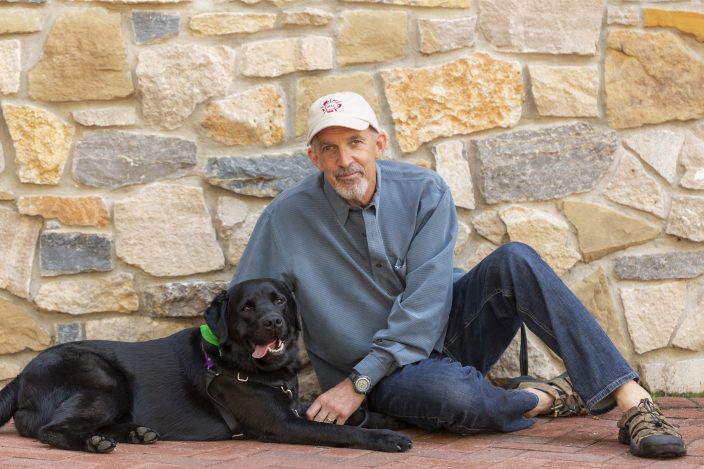 Philip Tedeschi, director emeritus of the Institute for Human-Animal Connection at the University of Denver, poses with his dog, Samara, on campus in Denver on July 25, 2018. In the eyes of the law, pets are property when it comes to divorce. But new ways of working out custody of the dog, cat or parrot have sprung up in recent years. There are special mediators and a push for “petnups” to avoid courtroom disputes. (Jess Blackwell PhotographyRover.com via AP).

Some judges around the country have been taking the approach on a case-by-case basis, Skoufis and matrimonial attorneys said. But couples are left to the whims of whichever judges they're assigned should they choose to go to trial.

Adam Citron, a New York lawyer who has handled dozens of divorces, said pets are “constantly an issue.” He's among lawyer who've sometimes see the worst in people in divorce court and advocates for prenups covering pets. A “petnup” is especially helpful for animals acquired during the marriage.

More laws specifically addressing the interests of pets are needed, he said, because custody issues over furry, feathered or scaled loved ones are far more emotional and difficult to resolve than claims over a set of china or the wedding silver.

This photo shows pet custody specialist Karis Nafte with her dogs Sam, left, and Jax in Cape Town, South Africa, on June 12, 2021. Nafte helps couples settle disputes over their pets as more states move to make it easier for judges to consider the best interests of companion animals in divorce. (Eytan Nafte via AP).

In states that haven't taken the new approach, Citron suggests agreeing at the time a pet is acquired during a marriage whose name will appear alone on registration or adoption papers. That person should pay any costs out of a separate bank account. Such measures are especially helpful if one party is trying to weaponize a pet in exchange for other coveted property.

While some mediators work to settle pet disputes through joint custody, others said that's not always best for the animal, particularly dogs. Dogs are most often at the center of pet custody disputes.

Memphis divorce lawyer Miles Mason Sr. has seen the worst-case scenario writ large. Several years ago, a couple went to war over their two German shepherds. The wife had taken training to handle the dogs, while the husband had not.

Before the divorce, while on a walk with the husband, one of the dogs bit and killed another dog. The wife claimed it was because the husband failed to give the “stand down” command in German as the dog was trained. During a divorce proceeding, he sought visitation rights. A judge barred him from unsupervised time with the dogs outside the wife’s home, but reserved the right to reconsider if he took the schutzhund training.

“We believe the judge had experience with German shepherds because he understood the concerns with highly trained and disciplined dogs,” Mason said.

Karis Nafte has been an animal behaviorist for nearly 26 years. Two years ago, she started working as a pet custody specialist for couples seeking divorces through pre-trial mediation.

Nafte is usually brought in at the recommendation of lawyers, mediators or divorce coaches.

“Part of what I try to help people understand is that even if a dog feels like a child in your heart, it isn't, and if you're treating it like a child, it's actually a disservice to the dog,” she said. “Having that voice, that kind of expert eye on the situation, calms things down. A lot of times, people just don't know what to do. They just don't want to say goodbye to their dog.”

Visitation schedules or shared custody, Nafte said, can be far more stressful for a dog than a goodbye forever. The back and forth between two homes and the emotions attached to each reunion can lead to behavioral problems, she said.

Nafte suggested putting pet custody at the top of divorce negotiations. It can make the rest of the process run more smoothly. So can couples therapy for some.

Marriage therapist Sharon O'Neill has helped couples through divorce in New York's Westchester County for more than 20 years. In one case, during a joint therapy session, a wife was adamant that she keep the dog, while the husband didn't believe she cared enough to take responsibility.

“In working with her alone, I came to understand that it had more to do with hurting her husband because she truly believed he loved the dog more than he had ever been capable of loving her,” O'Neill said. “We managed to get to the practical truth that it would be a responsibility she really preferred to live without. We found something else she could ask for in lieu of getting the dog: several pieces of beautiful furniture that she didn't want to split up with her husband. They both agreed.”

“What we would like to see is to have animals considered in the most holistic way possible,” she said. “Who is the animal bonded to? Who can provide for the animal's overall health and well-being going forward?"

Philip Tedeschi, director emeritus of the Institute for Human-Animal Connection at the University of Denver, said that while dogs are still seen as property legally speaking, they have complex emotions and cognition in their interactions with humans.

“The kinds of stress that would be placed on a family related to a divorce also have impacts on the emotional and health lives of animals,” he said. “We're really largely lagging behind in recognition that non-human animals have emotional lives, have feelings. Even opinions.”