Germany’s center-right bloc is pledging to boost the economy without raising taxes and make the country “climate-neutral” by 2045 without endangering jobs in its program for the September election that will determine who succeeds long-time Chancellor Angela Merkel.

The Union bloc on Monday became the last major political force to set out its stall for the Sept. 26 parliamentary election. The other two parties fielding candidates for the chancellery, the environmentalist Greens and the center-left Social Democrats, unveiled their programs in March.

The bloc — made up of the Christian Democratic Union of Armin Laschet, who is running to become Germany's next leader, and the Bavaria-only Christian Social Union — released its program at a time when polls show it back in the lead. It had fallen behind the Greens earlier this year amid discontent with a slow start to Germany's coronavirus vaccination campaign, a scandal over some lawmakers' involvement with lucrative mask procurement deals and squabbling over who would seek the top job. 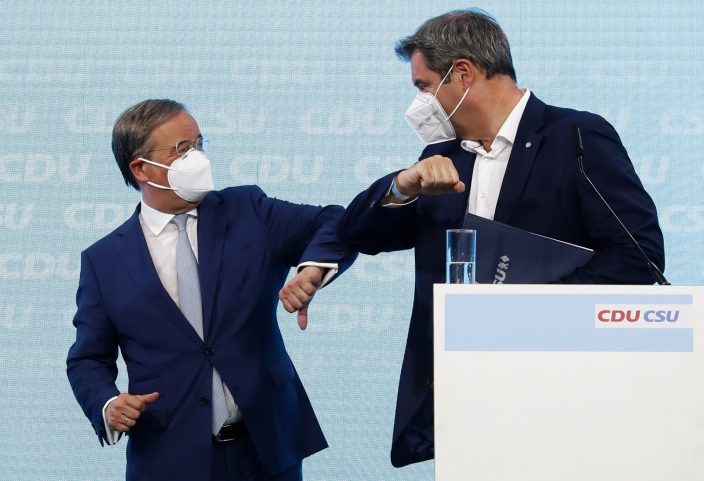 Its manifesto is titled “the program for stability and renewal” — reflecting the challenge of building on the popularity of Merkel, who long since decided not to seek a fifth four-year term, while also offering something new.

“We want to make our country faster, more efficient and more digital,” Laschet said. “Germany must become a leader in new technologies, our country belongs at the top on climate protection and it must become better able to resist pandemics, cyberattacks, populism, extremism and economic crises.”

“Our offer is that we will combine climate protection with economic strength and social security,” he said. “We will make Germany a climate-neutral industrial country with good and secure jobs.” The Union pledged to implement the government’s existing goal of cutting greenhouse gas emissions to net zero by 2045. 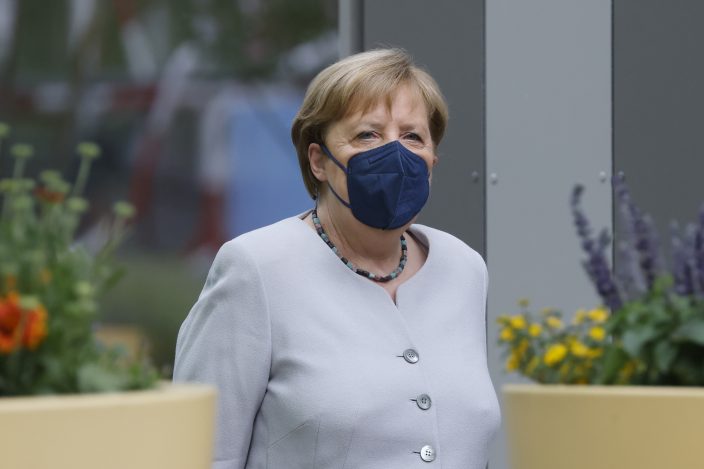 German Chancellor Angela Merkel arrives for a leadership meeting of the Christian Democratic Union (CDU) and the Bavarian Christian Social Union (CSU) in Berlin, Sunday June 20, 2021, on the eve of the unveiling of their electoral program ahead of the September general election. (Odd AndersenPool via AP)

The program is vague, though, on how prices for emitting carbon dioxide will develop. It says that “we want to streamline the growth path of CO2 pricing and move as quickly as possible to European emissions trading for mobility and heating."

Challenged about the lack of a set CO2 price pledge, Laschet said the aim is for it to be determined by the market rather than politicians. The Union aims to offset increases by reducing the cost of electricity.

The bloc is sticking to the aim of a balanced budget, which Germany managed for years under Merkel but was thrown off course by the coronavirus pandemic. And it stands by the German center-right's aversion to tax increases, even after massive spending to counter the COVID-19 crisis.

“The core question is ... do you think you bring in more money through tax increases? Or are you convinced by the experience that we had before the pandemic, that we had no tax increases for years but the state took in more money anyway because there was economic growth?” Laschet asked. Cutting back on bureaucracy and regulation will bring in more tax income, he said.

But he added that “this isn't a program of big tax cuts ... that isn't realistic at the moment.”