Lawyers for Myanmar's ousted leader, Aung San Suu Kyi, said Monday she told them some of the testimony against her was wrong in her trial on criminal charges that could send her to prison and end her political career.

In the trial, now in its second week. Suu Kyi is charged with illegally importing walkie-talkies for her bodyguards’ use, unlicensed use of the radios, spreading information that could cause public alarm or unrest, and violating COVID-19 pandemic restrictions during the 2020 election campaign.

Critics of the ruling military junta say the case is meant to discredit her and legitimize its seizure of power. The charges in the trial are relatively minor, but if she is convicted could keep her from contesting a new election promised by the military within two years of its takeover. 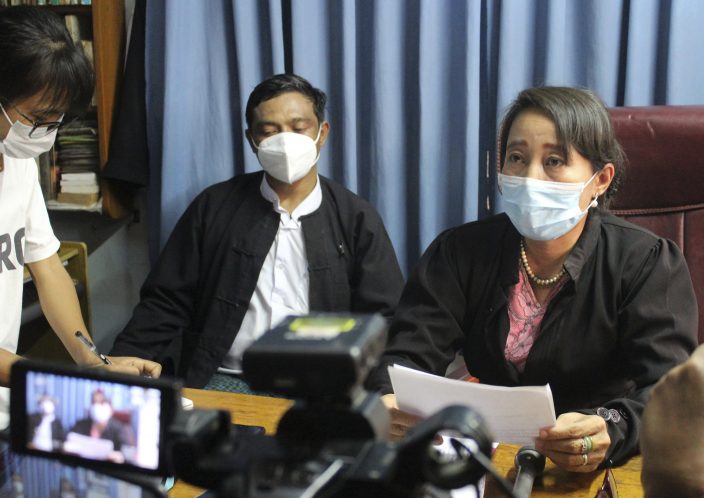 Min Min Soe, right, and Thae Maung Maung, left rear, both lawyers assigned by the National League for Democracy party to represent deposed Myanmar leader Aung San Suu Kyi, meet journalists in Naypyitaw, Myanmar, Monday, June 21, 2021. As the trial of ousted leader Aung San Suu Kyi entered its second week, her lawyers said prosecution witnesses testified about charges that she had illegally imported and used walkie-talkies for her bodyguards, and along with Win Myint, president in her government, had flouted laws on public gatherings that were meant to combat the spread of COVID-19. (AP Photo)

Even if Suu Kyi is acquitted, there are two more serious charges against her that have yet to go to trial: violating a state secrets act, a holdover from British colonial law that is punishable by up to 14 years’ imprisonment, and accepting bribes, which carries a maximum 15-year prison sentence.

Suu Kyi "listened with interest during the entire court hearing process and told us which testimony is wrong, which one should be cross-examined,” one of her lawyers, Min Min Soe, said after Monday’s court session in the capital, Naypyitaw. She did not cite any examples.

Another of her lawyers, Kyi Win, said Monday’s testimony by police and a local official involved the charges of violating pandemic control regulations, and the unregistered import and use of the walkie-talkies.

Kyi Win said the army captain who testified about importing the radios provided few details when he questioned him.

“All he could say was that the telecommunications equipment had been handed over to him. And he doesn’t know the rest,” Kyi Win said.

The army seized power in February, preventing Suu Kyi's National League for Democracy party from beginning a second five-year term after a landslide election victory in the November election. She and President Win Myint and other senior members of her government and party were arrested, and the country is now under harsh military rule.

The military ruled Myanmar for 50 years after a coup in 1962 and kept Suu Kyi under house arrest for 15 years after a failed 1988 popular uprising.

On Friday, a U.N. General Assembly resolution with broad support called on the ruling junta to restore the country’s democratic transition, condemned its “excessive and lethal violence” since the takeover and called on all countries “to prevent the flow of arms into Myanmar.”

The resolution also called on the junta to immediately and unconditionally release Suu Kyi, Win Myint and other officials and politicians detained after the takeover, as well as “all those who have been arbitrarily detained, charged or arrested.”

Suu Kyi turned 76 on Saturday, and lawyer Min Min Soe said that during her half-hour meeting with the defense team before Monday’s proceedings, she expressed gratitude to the people who prayed for her on her birthday. Her lawyers are seeking a longer period of time to be allowed to confer with her.

“She gave us four chocolates each for her birthday celebration. She also told the people to be united,” Min Min Soe said.