When Chris Therien lost his sister in 2006, Luke Richardson was one of the first people there for support. Therien repaid that in 2010 when Richardson's daughter Daron died by suicide at the age of 14.

“That broke my heart,” Therien said. “It broke a lot of guys’ hearts because we knew the character of a guy like Luke Richardson and what he meant to us as teammates and people.”

Therien was one of many to attend a memorial ceremony for Daron Richardson in Ottawa, an event that showed how much Luke Richardson mattered to the hockey community near and far. Eleven years later, Richardson has taken over as acting coach in Montreal and has the Canadiens a handful of victories from the Stanley Cup, with Daron on his mind and countless people around the sport glad to see him getting this opportunity. 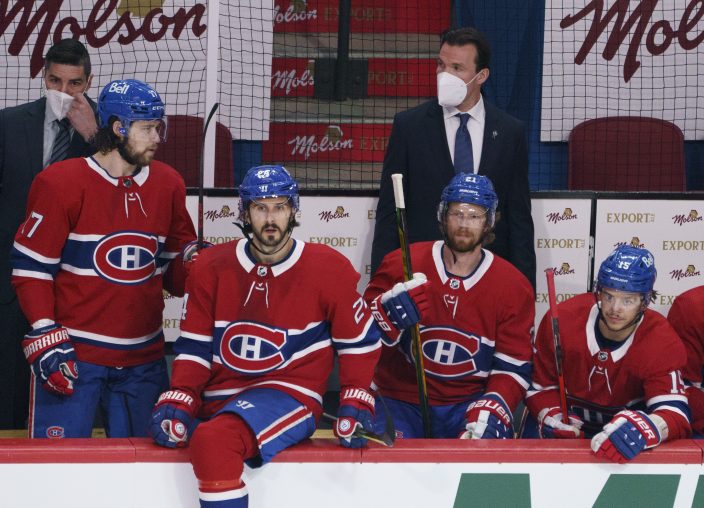 Luke Richardson, acting as Montreal Canadiens coach, stands behind the team bench during the first period of Game 3 of an NHL hockey semifinal series against the Vegas Golden Knights on Friday, June 18, 2021, in Montreal. (Paul ChiassonThe Canadian Press via AP)

“He’s always thinking of others, always thinking about how to better the situation,” said Toronto forward Nick Foligno, who knew Richardson for years before playing with and for him in the NHL. “There’s no surprise as to how his career has unfolded as a coach and how many people care about him. He’s a guy that I think every player that played for him or with him absolutely loved.”

The 52-year-old Richardson was thrust into running Montreal's bench for Game 3 of the NHL semifinals against Vegas last week after interim coach Dominique Ducharme tested positive for the coronavirus and went into isolation. After a thrilling comeback victory in overtime, Richardson tapped the DIFD heart pin on his lapel that signifies the Do It For Daron youth mental health program he and his wife, Stephanie, started in their late daughter's memory.

“Daron is always in my heart and in our hearts,” Richardson said. “I just thought it was a perfect time to pay a little tribute to her because we definitely miss her.”

Richardson played almost 1,500 NHL regular-season and playoff games as a defenseman and went immediately into coaching after hanging up his skates. How he and his family managed the grief of Daron's death in November 2010 and beyond showed other players and coaches Richardson's strength and willingness to put others first.

“I still don’t know how he handled it as well as he did because to have something like that happen, it shook everybody," said Toronto’s Jason Spezza, who like Foligno played with and under Richardson in Ottawa. “He was very stoic about it, tried to share a little bit with us but also just tried to keep business as usual.”

Richardson and his wife turned their pain into public good through Do It For Daron at the Royal Ottawa Foundation for Mental Health in the hopes of supporting children dealing with mental health concerns. More than 21,000 students have gone through the “Is It Just Me?” program, and Royal Ottawa Foundation interim president and CEO Cynthia Little said over $4.2 million has been raised over the past decade for youth mental health initiatives.

“It took on a life of its own,” Little said. “The community just rallied together and put their arms around embracing mental health.”

Richardson said his family's hope was to “break through that barrier of stigma so young people don’t feel isolated” and to listen and help as much as possible.

Helping those around him is what Richardson has always done. Therien played with Richardson for five seasons with Philadelphia and considers him one of the top three teammates from his entire career.

“When you start getting yourself into that realm with me, you’ve left an impact,” Therien said. “He really, really left an impact on a lot of people in this league.”

That continues in coaching. Ducharme called Richardson a "true person and “the best teammate you can have.”

“He was always there for his teammates, and he’s the same way in life, or within the staff," Ducharme said. "He’s got really good hockey knowledge, but also he’s that kind of guy you want to be going through adversity or facing obstacles, you want a guy like that on your side.”

Foligno learned that from a young age. He and his family moved in with Richardson in 1991 when dad Mike was traded to Toronto, and their rapport evolved when they became teammates in 2007 with the Senators.

Richardson was the no-nonsense wily veteran who would also host Super Bowl parties and other team gatherings at his house. Foligno fondly recalls dinners with Luke, Stephanie, Daron and their other daughter, Morgan, that helped him adjust to life as a pro.

“He was just so good to me,” Foigno said. “He’s able to relate with a 19-year-old and a 35-year-old. I think that’s why he’s such a good coach. He’s somebody that understands both those dynamics.”

Those dynamics are on display now after Richardson added up the experience of seven seasons as an NHL assistant sandwiched around a four-year stint as head coach of Binghamton in the American Hockey League.

“Experience always helps,” Richardson said. “I’ve been through pretty much every scenario other than probably getting to the finals of the Stanley Cup in this league.”

Two more victories in the semifinals would get Richardson and the Canadiens there. After Richardson figured his first game as an NHL head coach would be in the preseason not the third round of the playoffs, many former teammates hope this is a springboard to a job of his own.

“I just kept thinking as I see him there, ‘This guy should probably be running his own bench somewhere eventually in the NHL,’" Therien said. ”His time will come, I’m sure."