Even in a building packed with 16,583 rowdy, rollicking fans, Suns guard Cameron Payne could feel the silence.

Phoenix still found a way to persevere in Game 1 of the Western Conference finals without the veteran, talkative presence of 11-time All-Star Chris Paul, beating the Los Angeles Clippers 120-114 on Sunday.

But there's no question that Paul's continued absence is less than ideal as the Suns try to make the NBA Finals for the first time since 1993. The 36-year-old has been in the league's COVID-19 health and safety protocols since Wednesday and there is not much clue about when he'll be able to return. 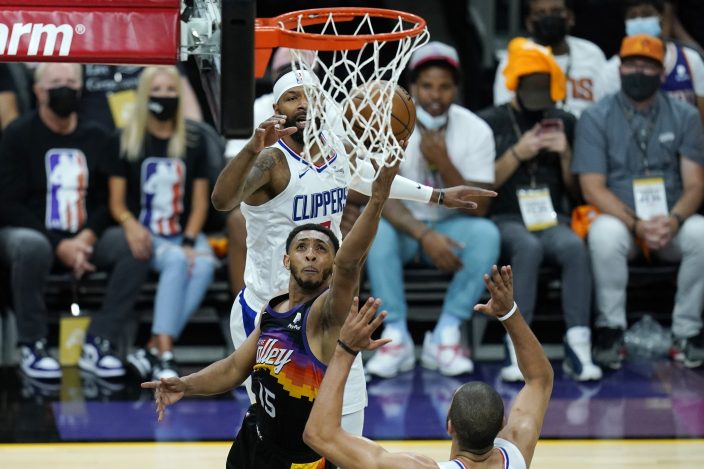 Game 2 is in Phoenix on Tuesday.

“Man, it’s crazy,” Payne said after Sunday's game. “(Paul) talks on the court, off the court, in the timeout, in the huddle, no-huddle, screaming, running down the court. It’s just something. And to not have that voice, it was kind of weird.” 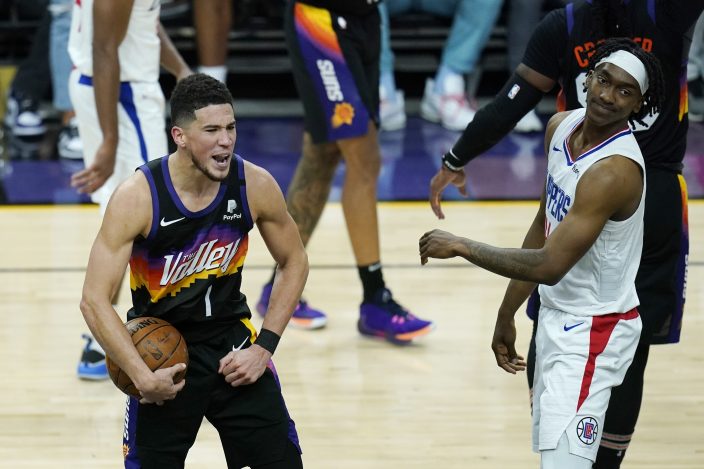 These Western Conference finals — along with many of the other matchups across the NBA this postseason — have been notable for not only the action on the court, but who has been missing from the court.

The Clippers are dealing with their own problems: Coach Tyronn Lue confirmed on Monday they won't have two-time Finals MVP Kawhi Leonard for a fourth straight game while he deals with a right knee injury.

While Paul and Leonard aren't with their respective teams at the moment — Leonard is back in Los Angeles getting treatment on his knee — both are trying to stay engaged through constant texts, calls and video chats. Suns guard Devin Booker had Paul on FaceTime immediately after Game 1 so the point guard could celebrate with the team. 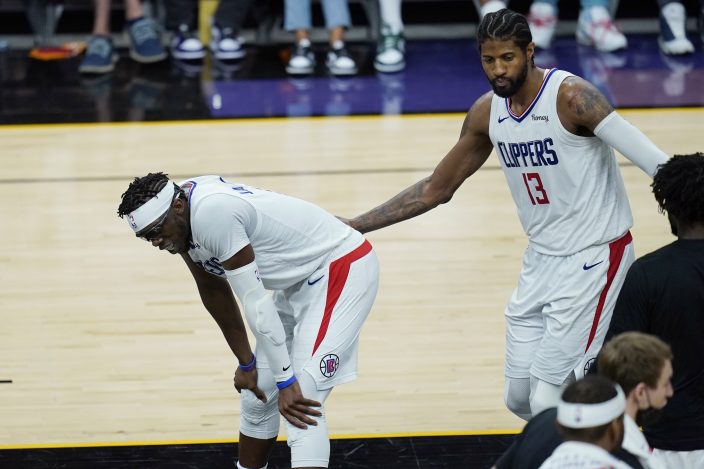 Lue said he texted with Leonard about 40 minutes before Monday's news conference and the forward wanted to know about adjustments and strategies for Game 2. Teammates echoed Lue's story, saying Leonard was in constant contact.

“He's our leader, he's our guy, doing everything he can to get healthy," Clippers guard Luke Kennard said. “Like everyone else has said, he's behind the scenes, making sure we're staying ready and locked in on what we need to do. He believes in us.” 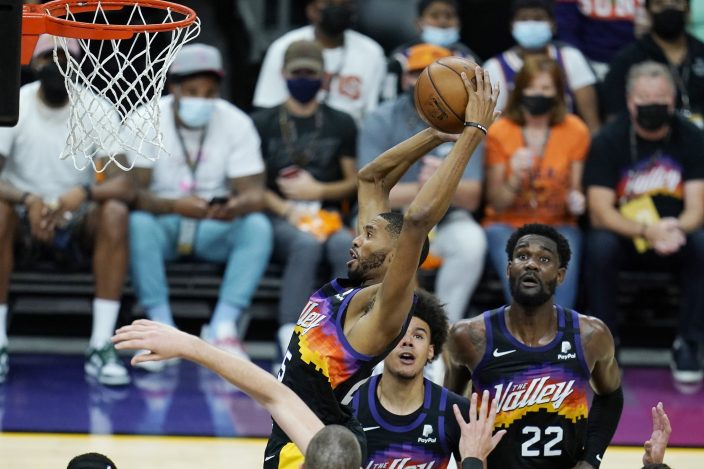 Game 1 evolved into an entertaining duel between Booker and Clippers forward Paul George. The two traded big-time shots, particularly in the third quarter, but Booker was able to keep adding baskets in the fourth.

Without Paul and Leonard, expect that matchup to be vital once again. Lue said the Clippers need to adjust their strategy against Booker. 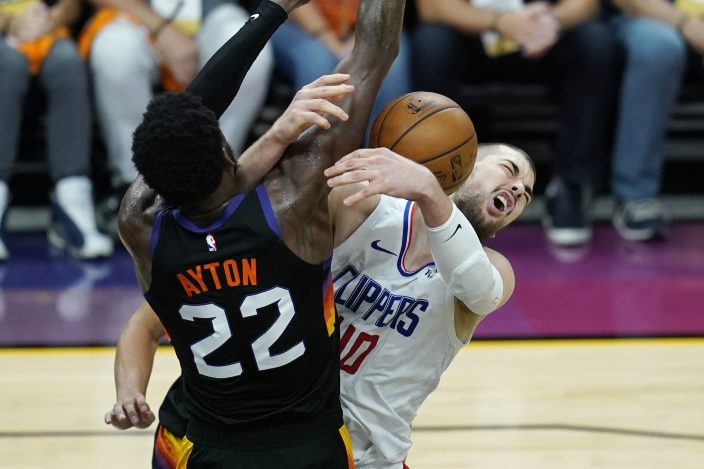 “Picking Devin Booker up too high up the floor, it gave him too much real estate to attack downhill,” Lue said. “I understand our guards are trying to get into him and apply pressure, but they were setting screens toward halfcourt which puts our bigs in a tough situation when he's coming downhill at full speed.”

The Clippers have more injury issues than Leonard. Veteran forward Marcus Morris played just 21 minutes on Sunday because of a sore knee. His status for Game 2 is uncertain. 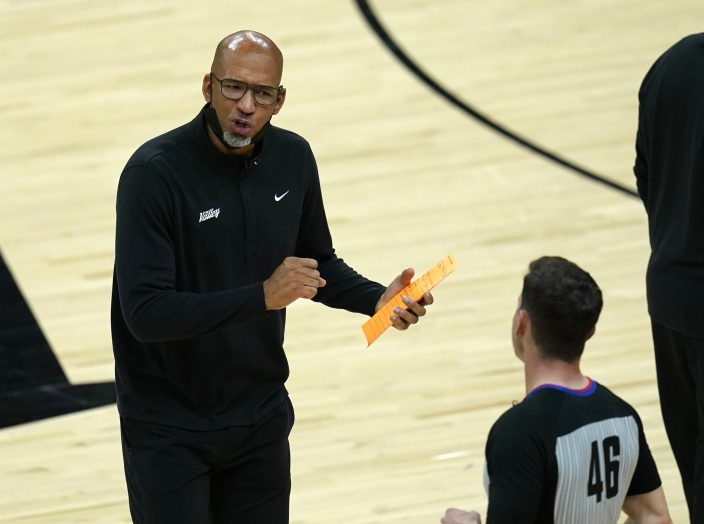 Morris has been an important part of the Clippers' offense and defense this season and averaged 13.2 points per game in the second-round series win over the Utah Jazz. Lue said Morris was getting treatment “around the clock.”

“He's doing everything in his power to be out there tomorrow night,” Lue said.

HE SHOOTS, HE SCORES 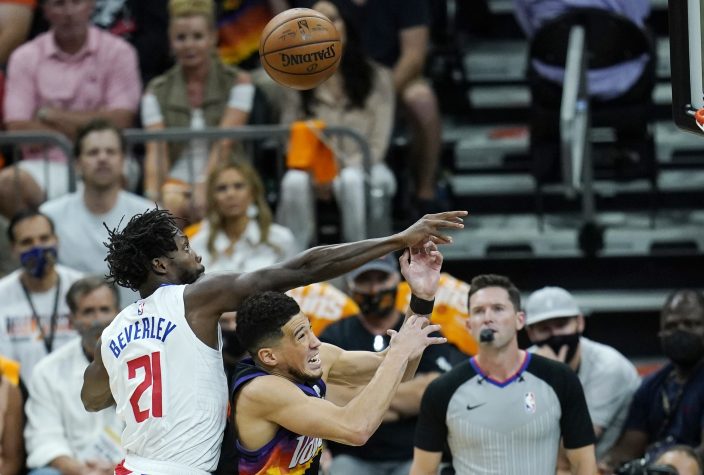 Suns forward Deandre Ayton continues to have an excellent postseason. The No. 1 overall pick in the 2018 draft has been efficient on offense, scoring 15.6 points per game while shooting a stellar 71.6% from the field.

He scored 20 points and grabbed nine rebounds in Sunday's win.

There was some concern that the 6-foot-11 Ayton might have trouble against the Clippers because they often like to go with smaller lineups. But the big man has good feet and usually holds his own when he gets pushed to the perimeter.

“I train my lateral quickness and I trust my defensive feet and hands,” Ayton said. “But like I said, the league is changing. That’s one of the reasons I don’t like calling myself a big man, because I love to get out and guard on the perimeter as well.”

If there's one thing to know about this year's version of the Clippers, it's that a 1-0 series deficit probably won't faze them.

Los Angeles fell behind 2-0 against both the Dallas Mavericks and Utah Jazz in the first two rounds. The Clippers roared back to beat the Mavericks in 7 and the Jazz in 6.

Now they'll have to come from behind again.

“As much as we wanted this one, I think this was a good feel-out game to see adjustments,” George said Sunday. “We’ve been great adjusting, and you know, we’ve been great at playing better as the series goes on.”