Jacob deGrom shouldered the load for New York in his return from another injury scare, pitching one-hit ball over five scoreless innings as the Mets beat the Atlanta Braves 4-2 Monday to open a doubleheader.

DeGrom (7-2) didn't allow a hit in the seven-inning game until Mets outfielders misplayed a fly ball with two outs in the fifth, letting it fall for a ground-rule double. DeGrom threw 70 pitches, 15 of them over 100 mph, with two walks and six strikeouts — a comfort for fans concerned about New York's ace after his last start was cut short by shoulder soreness.

Jeff McNeil came off the injured list and singled as a pinch-hitter for deGrom during New York's three-run fifth inning. He scored on Dominic Smith's three-run double. 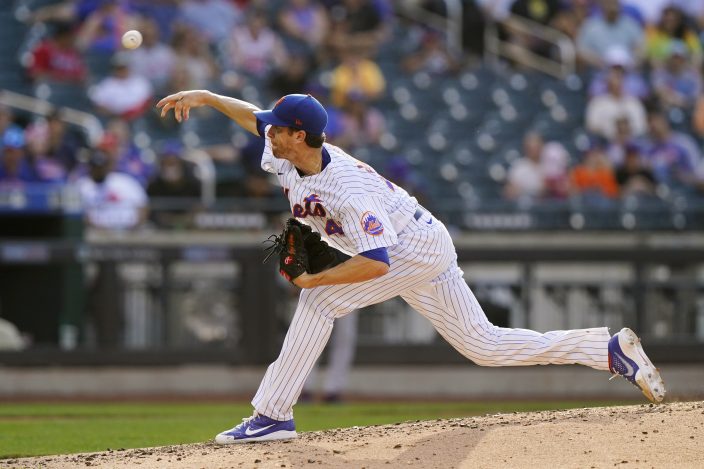 Ozzie Albies hit a two-run homer off reliever Seth Lugo for the Braves, who had won three of four but were playing their second doubleheader in two days. Kyle Muller (0-1) pitched one-hit ball over four innings, leaving with a 1-0 deficit in his first big league start.

Mets closer Edwin Díaz finished up the two-hitter, pitching the seventh for his 15th save in 16 chances.

DeGrom has thrown 30 consecutive scoreless innings, 2 2/3 shy of R.A. Dickey’s franchise record set in 2012. His 0.50 ERA is the lowest by a pitcher through 12 starts in major league history. Opponents are hitting .113 against him, the lowest average against any pitcher in a 12-game span since at least 1901, with a minimum 70 innings. 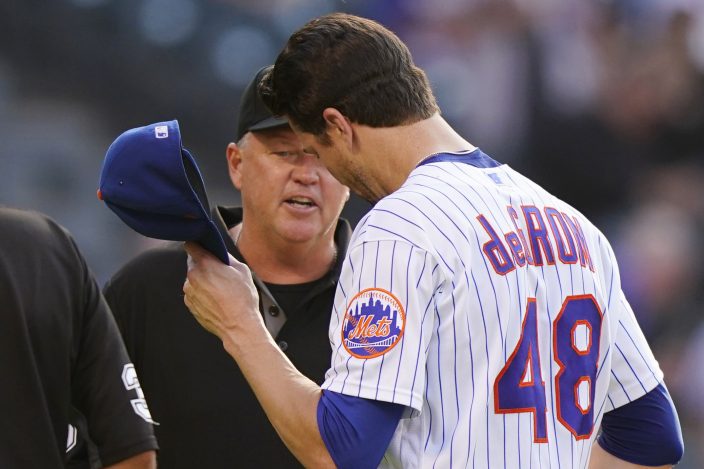 Third base umpire Ron Kulpa, left, looks inside the cap of New York Mets starting pitcher Jacob deGrom (48) after deGrom pitched in the top of the fifth inning of a baseball game against the Atlanta Braves, Monday, June 21, 2021, in New York. (AP PhotoKathy Willens)

The two-time NL Cy Young Award winner came out firing in his first start following his 33rd birthday, after his previous two outings were cut short by arm trouble. The right-hander was pulled after three perfect innings against the Cubs last Wednesday with shoulder soreness, and he left the outing prior to that June 11 against San Diego with flexor tendinitis in his right arm.

He had a clean MRI and threw a pain-free bullpen in recent days, giving the Mets confidence he could pitch on his standard four days of rest.

DeGrom put nervy New York fans at ease by striking out Ronald Acuña Jr. with a 100 mph fastball to start the game. He struck out two during a perfect first inning and has retired 34 consecutive first-inning hitters, the most in the majors since at least 1961. 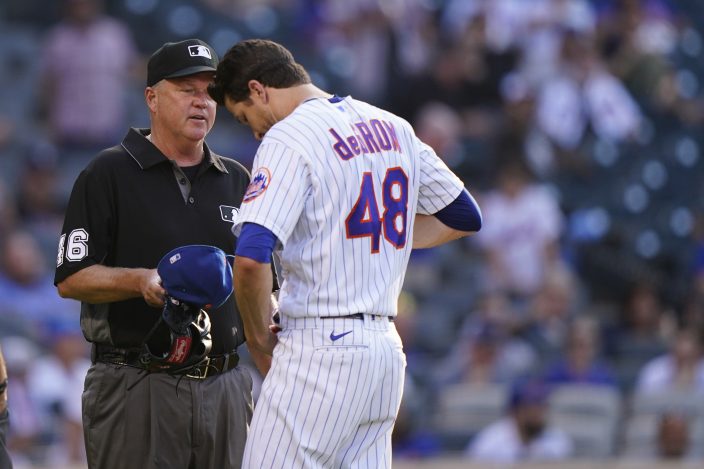 New York Mets starter Jacob deGrom (48) unbuckles his belt for third base umpire Ron Kulpa (46) after leaving the mound after pitching the top of the fifth inning of a baseball game against the Atlanta Braves, Monday, June 21, 2021, in New York. (AP PhotoKathy Willens)

DeGrom has thrown 154 pitches at least 100 mph this season. That’s most in baseball among starting pitchers — Tampa Bay’s Shane McClanahan was second entering Monday with 14.

DeGrom snagged a hard-hit comebacker by Guillermo Heredia and walked Muller and Heredia, but he was otherwise overpowering the first four innings.

Smith's fly dropped on the warning track in the fifth between center fielder Albert Almora Jr. and left fielder Dominic Smith. The outfielders appeared to miscommunicate on the catchable ball, which bounced over the wall for a ground-rule double. 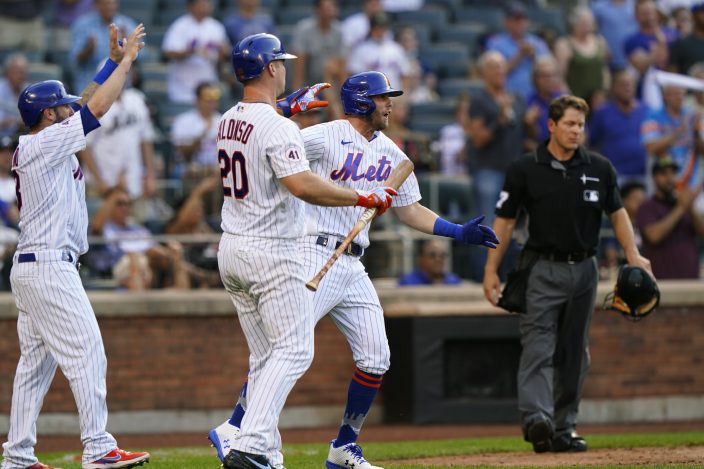 Heredia was on first for Smith's fly and would have scored if the ball didn't skip out of play. DeGrom stranded both runners by inducing a popup from pinch-hitter Pablo Sandoval.

DeGrom thinks he injured his shoulder batting, raising speculation he might not swing. After fouling off a bunt attempt in the second, deGrom took a cut with two runners on. It didn't look like a full-effort hack, though, and he popped up easily to left-center field.

The lefty-hitting deGrom's average dropped to .407. He has six RBIs this season compared to four earned runs allowed. 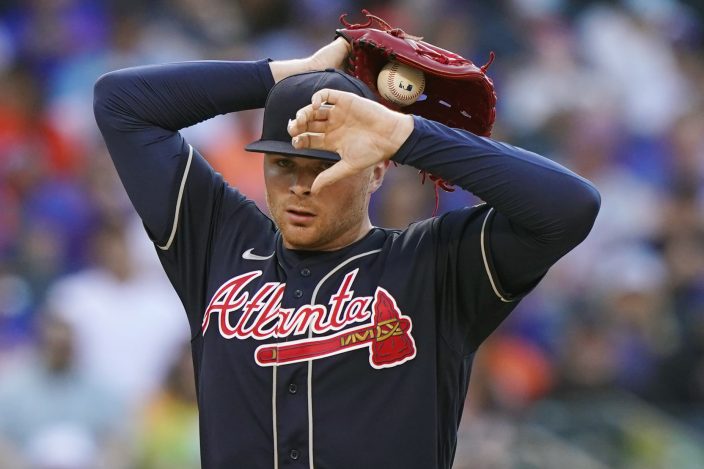 Muller let the Mets take a 1-0 lead in the first when he walked Jonathan Villar and later let him score from third on a wild pitch. He was sharp after that, and the only hit he allowed bounced off center fielder Heredia's glove in a dubious scoring decision.

STICKING TO THE PLAN

DeGrom was the first pitcher inspected as part of Major League Baseball's crackdown on foreign substances. He passed. 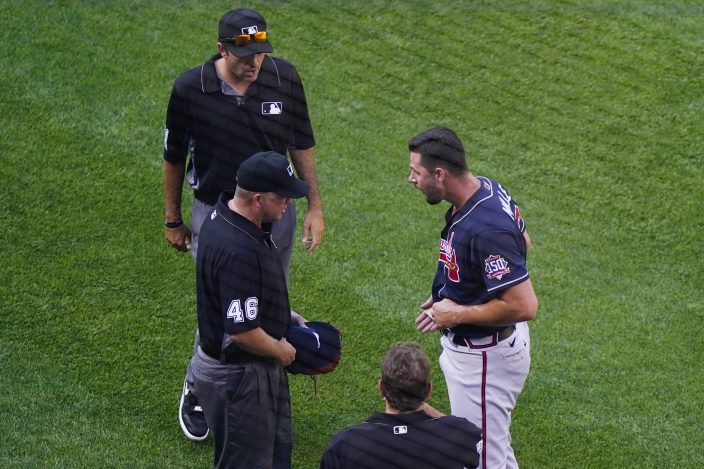 Atlanta Braves starter Kyle Muller, right, reacts as third base umpire Ron Kulpa (46) asks to see what is beneath his belt after he pitched during the first inning of a baseball game against the New York Mets, Monday, June 21, 2021, in New York. (AP PhotoKathy Willens)

Fans booed loudly when plate umpire Ben May halted deGrom on his way off the field after the first inning. Crew chief Ron Kulpa jogged in from third base and asked deGrom for his glove and hat, and deGrom chuckled as he handed them over. Kulpa also asked deGrom to undo his belt buckle and checked for goop there, too.

Cleared by Kulpa, deGrom walked on to the dugout, laughing with catcher Tomás Nido about the exchange. Pitchers from both teams were checked throughout the game.

Acuña struck out in bizarre fashion in the sixth. He was initially awarded a hit-by-pitch on a 1-2 fastball from Seth Lugo, but the Mets challenged. Umpires ruled the ball hit the handle of Acuña's bat for a foul tip, and because catcher James McCann caught it, it counted as a third strike.

Mets: McNeil hadn’t played since May 16 because of a left hamstring strain. ... C Tomás Nido was hit on the right wrist by a pitch in the opener and was replaced a half-inning later by James McCann. ... RHP Robert Gsellman was placed on the 10-day injured list with a right lat strain. ... LHP Stephen Tarpley was recalled from Triple-A Syracuse as New York’s 27th man for the twinbill.

Braves RHP Ian Anderson (4-3, 3.58) could become the first New Yorker to beat the Yankees and Mets in the same season when he starts the nightcap. New York hadn't announced a starter, but it's expected RHP Jerad Eickhoff will make his first appearance this season.