In the 1950s, when University of California forestry professor Harold Biswell experimented with prescribed burns in the state's pine forests, many people thought he was nuts.

“Harry the Torch,” “Burn-Em-Up Biswell” and “Doctor Burnwell” were some of his nicknames from critics, who included federal and state foresters and timber groups.

Six decades after Biswell preached an unpopular message to those who advocated full-on fire suppression, he is seen not as crazy but someone whose ideas could save the U.S. West’s forests and ease wildfire dangers. 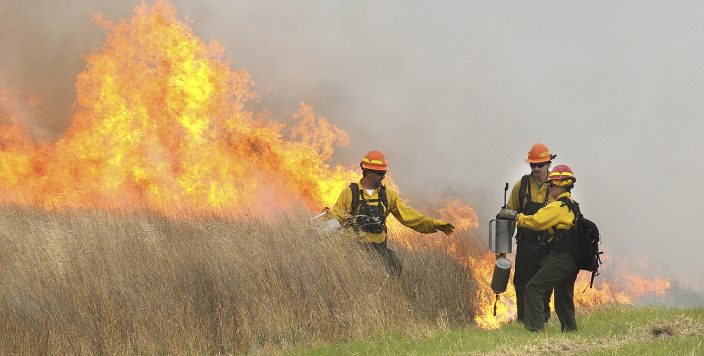 Millions of acres have become overgrown, prone to wildfires that have devastated towns, triggered massive evacuations and blanketed the West Coast in thick smoke. 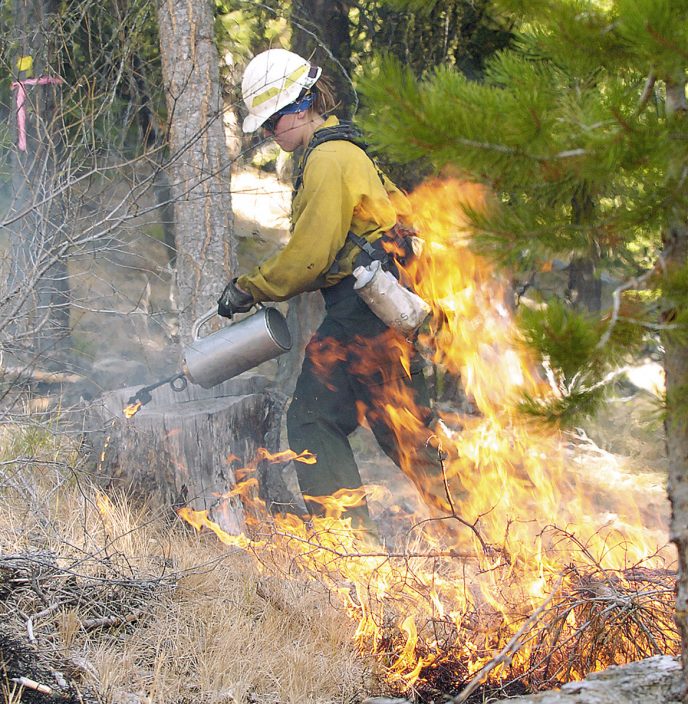 FILE - In this cot. 24, 2005, file photo, Jeanne Dawson, Forest Service employee at the Pine office, near Halfway, ignites a line of fire during a prescribed burn in the mountains above Sumpter, Ore. Hundreds of millions of acres of forests have become overgrown, prone to wildfires that have devastated towns, triggered massive evacuations and blanketed the West Coast in choking smoke. Today, officials want to sharply increase prescribed burns, with drought and global warming creating a sense of urgency. (S. John CollinsBaker City Herald via AP, File)

“We would have a technically skilled prescribed fire workforce,” Wyden said in a phone interview. "We would streamline the smoke regulations in winter months."

Wyden and the Biden administration are also seeking creation of a 21st century Civilian Conservation Corps, to provide more boots on the ground to work on forest health.

In New Mexico, Gov. Michelle Lujan Grisham signed legislation on March 18 that will clear the way for more prescribed fires by establishing liability standards for landowners who conduct them and creating a certification program.

In Oregon, a bill from state Sen. Jeff Golden would enact rules for prescribed fires and a certified burn manager program. He envisions Oregon having as many as hundreds of trained managers to supervise prescribed fires.

“I don’t see that we have any option other than to increase the prescribed burns," said Golden, who is from the Rogue Valley, where wildfires tore into two towns last year. “We’ve got, across the Western U.S., a buildup of decades of fuels, and it’s going to burn.

"So do you want to burn in a planned, strategic way that has an element of control to it, or do you want it to burn in megafires, with all the costs — human, animal, environmental costs — that that entails?”

Yet scaling up the practice has been slow. From 1995 through 2000, an average of 1.4 million federal acres (566,560 hectares) were treated with prescribed fire each year, far short of the 70 million acres (28 million hectares) that in 2001 were in critical need of fuel reduction to avoid high-severity wildfires, biologist David Carle said in his 2002 book “Burning Questions: America’s Fight with Nature’s Fire.” Another 141 million acres (57 million hectares) also needed treatment.

Several cold realities are stacked against the latest plans: The periods between wildfire seasons when prescribed burning can happen safely are shrinking; some forests are too overgrown to ignite without thinning; and prescribed fires can shroud nearby towns.

“We have to be mindful of not pouring smoke into communities because that’s a violation of the Clean Air Act,” said Tim Holschbach, deputy chief of policy and planning with Oregon's Department of Forestry.

Furthermore, many landowners are reluctant to use prescribed fire because of fears of getting hit with steep costs.

Some states can hold burners liable for any property damage caused by an escaped prescribed fire. Others use so-called simple negligence standards, which require the burner to practice reasonable care. A plaintiff would need to prove negligence for the burner to be responsible for damages and firefighting suppression costs. Gross negligence standards make it harder to hold people accountable, requiring plaintiffs to show burners acted with reckless disregard if fires get out of control.

To encourage prescribed burning on private lands, Oregon will explore shifting from simple to gross negligence. Gov. Kate Brown signed legislation on June 11 that directs a state agency, in consultation with stakeholders, to study whether states with such standards experience more prescribed fires and more out-of-control fires. The review must also examine the accessibility of insurance coverage for prescribed fires.

One of the most destructive escaped fires occurred in 2012, when the Colorado State Forest Service conducted a 50-acre (20-hectare) prescribed burn near the small town of Conifer, southwest of Denver. After the fire seemed to be out, high winds whipped it back to life.

Ann Appel, 51, was among worried residents who dialed 911.

“It’s blowing smoke right over my house,” she told an emergency dispatcher.

“Yeah, it’s about 5 acres (2 hectares) and growing, so they’ve got crews on the way,” the dispatcher replied.

Appel thanked the operator and hung up. Her body was later found in the ashes of her home.

Colorado's immunity law capped liability at $600,000 per incident, but after the fire, the Legislature removed the cap for controlled burns in cases where victims claim the state acted negligently. The state paid a total of $18 million in compensation to two dozen parties. The largest settlement, $4.8 million, went to Appel’s husband and estate.

Prescribed burning has prevented disasters, and high rebuilding costs. In 2017, a wildfire threatened the resort town of Sisters, Oregon, but firefighters were able to control it because months earlier, crews removed trees and brush with machines, then ignited prescribed burns.

“The fire came to a halt, both because it had less fuels and also because in the thinned, more natural forest, there was a lot more space for the firefighters," noted Democratic Sen. Jeff Merkley of Oregon, who is pushing for more funding for forest treatment.

Scott Stephens, a professor of wildland fire science at the University of California, Berkeley, wants a big increase in prescribed burns, along with mechanical forest thinning, but predicts it will be gradual due to both a lack of people trained in it and of political and societal support.

That prescribed burning is now widely seen as a remedy would have been welcome news to Biswell, who died in 1992 at age 86.

Harold Weaver, a forester for the Bureau of Indian Affairs, was also an early advocate. In 1955, Weaver published an article titled “Fire as an enemy, friend and tool in forest management.” Like Biswell, he was cold-shouldered. The two supported each other.

The West, which is more susceptible to wildfires because of its vast wildlands and dry climate, has been stepping up prescribed burns.

In 2019, 3.7 million acres were treated by prescribed fire in the West, a 268% increase from 2011, the National Association of State Foresters and the Coalition of Prescribed Fire Councils said in a report.

Stephens said prescribed fire and restoration thinning should increase at least five-fold to turn things around and create healthy forests as Biswell, his predecessor at Berkeley, envisioned.

“Once you get areas treated, you have to come back in around 15 years for maintenance treatments. And this never ends," Stephens said. "This is a key point: The program has to last forever."