Yu Darvish struck out 11 in six brilliant innings to become the fastest big leaguer to reach 1,500 for his career, Manny Machado and Jake Cronenworth homered and the San Diego Padres beat the Los Angeles Dodgers 6-2 on Monday night in the opener of a three-game series between the NL West rivals.

Darvish (7-2) reached 1,500 strikeouts on the nose in 197 starts. He held the Dodgers to two hits, including Mookie Betts' solo homer, and walked just one.

The Padres improved to 5-3 this season against the Dodgers. 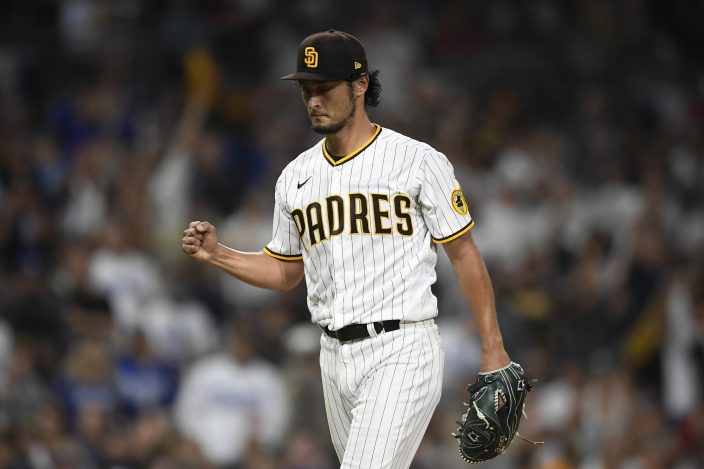 San Diego Padres starting pitcher Yu Darvish (11) pumps his fist after getting the final out during the sixth inning of a baseball game against the Los Angeles Dodgers, Monday, June 21, 2021, in San Diego. (AP PhotoDenis Poroy)

After playing two entertaining series before limited-capacity crowds, this was the first time this season the teams faced each other in a full-capacity ballpark after California's reopening plan went into effect last week. The sellout crowd of 42,220 appeared to be fairly evenly split between Dodgers and Padres fans.

The Dodgers swept the Padres in their NL Division Series last year en route to the World Series title.

Darvish's only big mistake was allowing Betts' homer to center with two outs in the third, his ninth. That ended a string of seven straight strikeouts for Darvish. 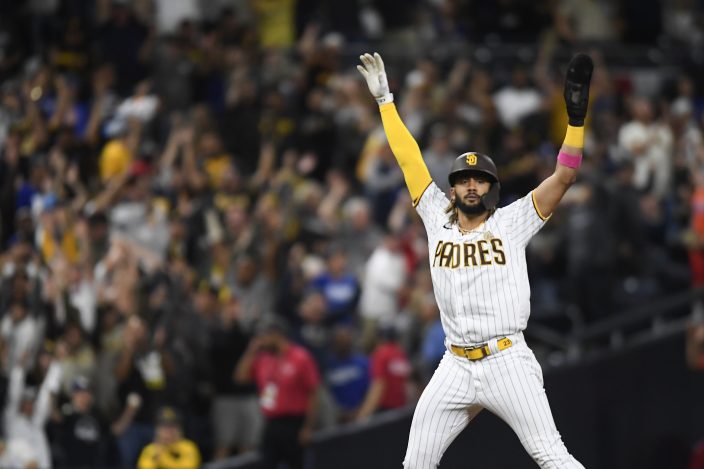 Darvish notched his milestone 1,500th strikeout when he got Steven Souza Jr. looking leading off the sixth. After Cronenworth's error at first base allowed Gavin Lux to reach with two outs, Darvish allowed just his second hit, a single by Justin Turner.

Rookie second baseman Kim Ha-seong then made a nice play on Will Smith's hard smash to end the inning, although he appeared to injure a finger and was replaced by Cronenworth the next inning.

Machado hit a three-run homer off Julio Urías (9-3) to give the Padres a 4-0 lead before the Dodgers got an out in the first. Urías allowed Tommy Pham's leadoff double, walked Fernando Tatis Jr. and allowed Cronenworth's opposite-field double to left before Machado drove his 11th homer to left.

Cronenworth homered to right in the fifth after Tatis hit a leadoff double to left. It was Cronenworth's ninth.

Darvish pitched for the Dodgers in the second half of 2017, including the World Series loss to Houston. He was obtained by the Padres in a trade with the Chicago Cubs on Dec. 29.

Will Smith homered off San Diego reliever Craig Stammen in the eighth, his ninth. 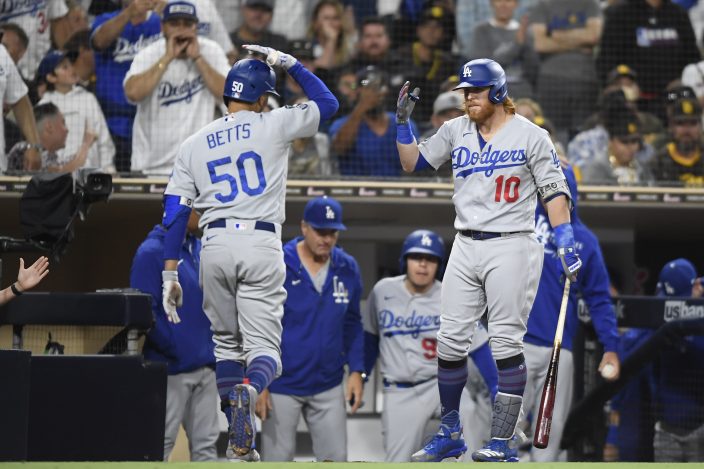 Baker Mayfield of the Cleveland Browns became the latest NFL quarterback to see a game at Petco Park. He wore a Mayfield No. 6 Padres jersey, sat in the first row behind home plate with his party and thanked the team on social media. Seattle Seahawks quarterback Russell Wilson and wife Ciara, who own a home in the San Diego area, were at a game earlier this year with their children. Former Saints and San Diego Chargers QB Drew Brees and his family have been to several games in the past, as has former Chargers signal caller Philip Rivers. Green Bay Packers quarterback Aaron Rodgers, who owns a home in Del Mar, once visited the San Francisco Giants in their dugout before a game at Petco Park. 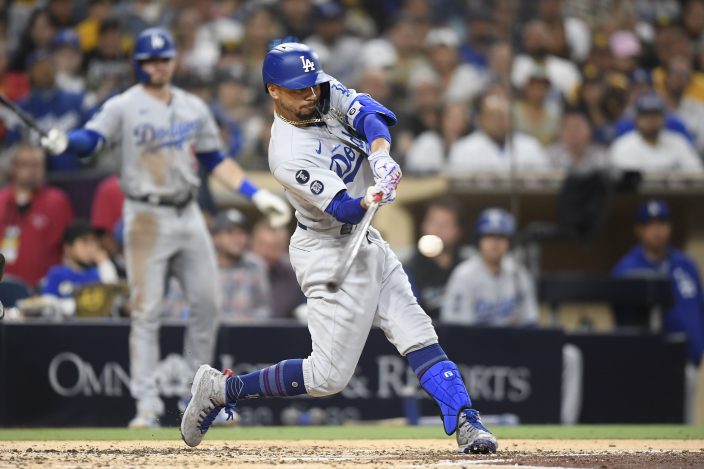 LHP Clayton Kershaw (8-6, 3.36 ERA) of the Dodgers and LHP Blake Snell (2-3, 5.72) of the Padres will provide a marquee matchup Tuesday night. Kershaw is 1-1 with a 2.08 ERA in two starts against San Diego this year and 22-8 with a 2.04 ERA in 42 career starts against them. Snell has two no-decisions against the Dodgers this year. He was pulled from Game 6 of the World Series by Tampa Bay manager Kevin Cash with the Rays leading the Dodgers 1-0 in the sixth inning last year. The Dodgers won the game and the Series.