Kasper Schmeichel described his feelings after Denmark’s win over Russia at the European Championship with one word.

That sense of unbridled joy is a nice feeling for a team that’s been through, as Schmeichel put it, ”a turbulent emotional roller coaster” at Euro 2020 but now has every reason to look forward with optimism. 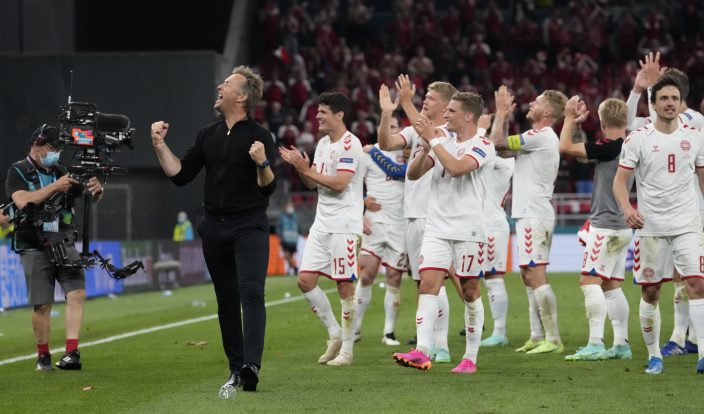 The 4-1 win over Russia secured a spot in the round of 16 for Denmark, where it will play Wales on Saturday in Amsterdam.

”After the last 10-12 days that we’ve been through, it feels great to advance,” Schmeichel said. ”So much has happened, but now the Euros start in earnest for us. We have a chance to make this a really good tournament after a very, very difficult start.”

That start, with Christian Eriksen suffering cardiac arrest during the opening game against Finland, has made Denmark a sentimental favorite for many fans even outside the country.

In Denmark, it has made the entire nation unite even more than it usually would during a major soccer tournament. The crowd of 25,000 at Parken Stadium has carried the team forward in its last two games against Belgium and Russia, and the players took time to thank them in every section of the arena after Monday’s game.

”I don’t think we could have done this without the support,” Denmark coach Kasper Hjulmand said. ”It lifts the players, it lifts everything, and it just means so much to us.”

Now, though, they have to find a way to win in a neutral venue, and against a team that reached the semifinals at Euro 2016.

”They have great players,” Hjulmand said of Wales. ”It will be a very exciting and a very equal match.”

Eriksen is widely considered Denmark’s best player and by far its most creative playmaker. But Hjulmand has adjusted to his absence by switching to a more defensively solid formation and it was 20-year-old Mikkel Damsgaard, who has replaced Eriksen in the starting lineup, who scored the opening goal against Russia.

Eriksen was released from the hospital on Friday and then went to visit his teammates before going home to continue his recovery with his family. Just like after the Belgium game, the Inter Milan midfielder sent a message to the team’s WhatsApp group right after the Russia win, defender Jens Stryger Larsen said.

And it’s clear that Eriksen’s ordeal is still a massive source of motivation for this Denmark team.

”We’ve been through so much in the time we’ve been together. We all agreed that this was not the last chapter in this story,” Denmark midfielder Christian Norgaard said. ”We must be allowed to enjoy the victory tonight and the feeling of moving on, after everything we have been through as a team. There was no doubt that this victory was also for Christian.”