A landmark cyberbullying trial in Paris, involving thousands of threats against a teenager who savaged Islam in online posts, is blazing a trail in efforts to punish and prevent online abuse.

It has also raised uncomfortable questions about freedom of expression, freedom to criticize a religion, and respect for France's millions of Muslims. But most of all, it’s been a trial about the power of the online word, and prosecutors hope it serves as a wake-up call to those who treat it lightly.

Thirteen young people of various backgrounds and religions from around France face potential prison time for charges including online harassment, online death threats and online rape threats in the two-day trial wrapping up Tuesday. It’s the first of its kind since France created a new court in January to prosecute online crimes, including harassment and discrimination. 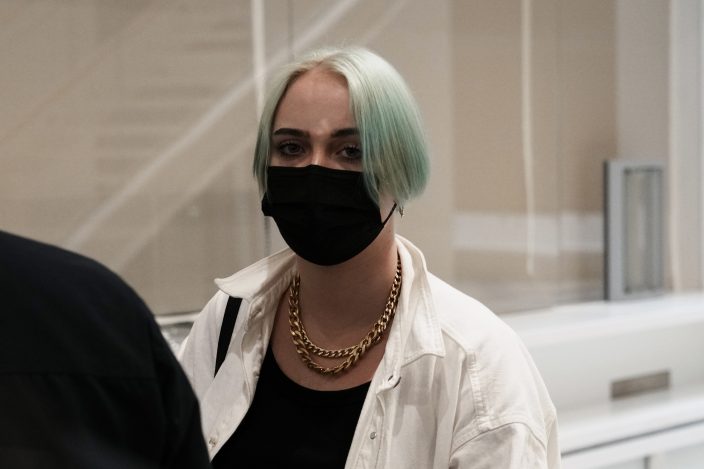 FILE - In this June 21, 2021 file photo, the teen who has been identified publicly only by her first name, Mila, leaves the courtroom in Paris. The landmark cyberbullying trial in Paris, involving thousands of threats against a teenager who savaged Islam in online posts, is blazing a trail in efforts to punish and prevent online abuse. It's also raising uncomfortable questions about France's freedom of expression, and freedom to commit blasphemy. But most of all, it's been a trial about the power of the online word, and prosecutors hope it serves as a wake-up call to those who treat it lightly. (AP PhotoThibault Camus,File)

One of the defendants wants to become a police officer. Another says he just wanted to rack up more followers by making people laugh. Some denied wrongdoing, others apologized. Most said they tweeted or posted without thinking.

The teen at the center of the trial, who has been identified publicly only by her first name, Mila, told the court she feels as if she’s been “condemned to death."

Mila, who describes herself as atheist, was 16 when she started posting videos on Instagram and later TikTok harshly criticizing Islam and the Quran. Now 18, she testified that “I don’t like any religion, not just Islam.”

Mila had to quit her high school, then another. She is now monitored daily by the police for her safety.

“It’s been a cataclysm, it feels like the sky is falling on our heads ... a confrontation with pure hatred,” her mother told the court.

Mila’s online enemies don’t fit a single profile. Among the thousands of threats, authorities tracked down 13 suspects who are on trial this week. All are being identified publicly only by their first names, according to French practice.

The trial focused on comments in response to a TikTok video by Mila in November criticizing Islam. A defendant named Manfred threatened to turn her into another Samuel Paty, a teacher who was beheaded outside Paris in October after showing caricatures of the Prophet Muhammad in class.

Manfred told the court he was “pretending to be a stalker to make people laugh.”

“I knew she was controversial because she criticized Islam. I wanted to have fun and get new subscribers,” he testified.

Defendant Enzo, 22, apologized in court for tweeting “you deserve to have your throat slit,” followed by a sexist epithet.

Others argued their posts didn’t constitute a crime.

“At the time, I was not aware that it was harassment. When I posted the tweet, I wasn’t thinking,” testified Lauren, a 21-year-old university student who tweeted about Mila: “Have her skull crushed, please.”

Alyssa, 20, one of the few Muslim defendants, says she reacted “like everyone else on Twitter” and stood by her criticism of Mila’s posts.

While the defense lawyer argued that it’s not the same thing to insult a god or a religion and a human being, Alyssa disagreed.

Freedom of expression is considered a fundamental right and blasphemy is not a crime in France. After Mila’s initial video in January 2020, a legal complaint was filed against her for incitement to racial hatred. That investigation was dropped for lack of evidence.

Mila’s online videos rekindled those concerns, and divided French society. While the threats against her were broadly condemned, former Socialist President Francois Hollande was among those who argued that while she has the right to criticize religion, “she should not engage in hate speech about those who practice their religion.”

Nawfel, 19, didn’t see the harm when he tweeted that Mila deserved the death penalty and insulted her sexuality. He has passed tests to become a gendarme and hopes not to be sentenced, to keep a clean record. The trial has given him new perspective on online activity.

“Without social media, everyone would have a normal life,” he said. “Now there are many people who will think before they write.”

The defendants face up to two years in prison and 30,000 euros in fines (about $37,000) if convicted of online harassment. Some are also accused of online death threats, an offense that carries a maximum prison sentence of three years and a fine of up to 45,000 euros ($55,000).

The prosecutor however only requested suspended sentences. A verdict is expected at a later date.

“You have the power to stop this digital lynching,” defense lawyer Malka told the judges. “Fear of the law is the only thing that remains.”

“I have this need to show that I will not change who I am and what I think,” she said. “I see it as like a woman who has been raped in the street and who is asked not to go out, so that it doesn’t happen again.”