Along with raising the profile of one of the LPGA Tour's oldest majors, KPMG this week is launching a program that has been sorely lacking in women's golf.

“KPMG Performance Insights” essentially gives the LPGA Tour a wide array of data and statistics that will give players a better understanding what parts of their games need improvement, and help the media work the analytics into stories.

“It's hard to put into words what this program will mean to me and all of the players,” said Stacy Lewis, a multiple major champion and former No. 1 player. 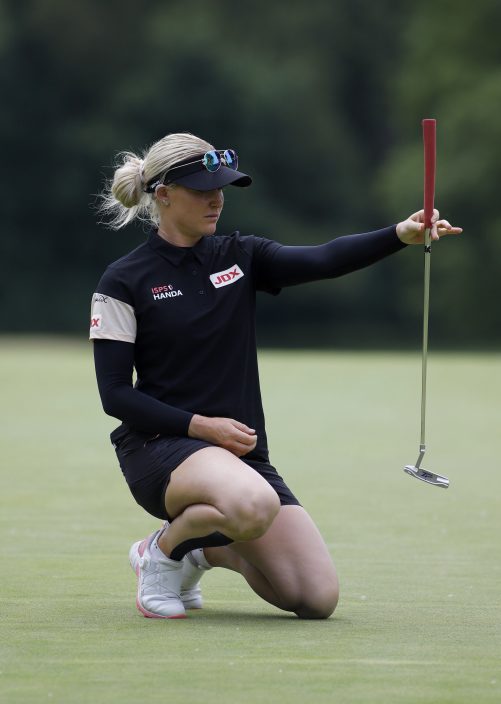 Charley Hull, of England, lines up her putt on the 16th green during the final round of the Meijer LPA Classic golf tournament, Sunday, June 20, 2021, in Grand Rapids, Mich. (AP PhotoAl Goldis)

It won't be the equivalent of ShotLink on the PGA Tour, an elaborate and expensive program that began with lasers and now incorporates cameras on every hole to show the shape and distance of every shot by every player.

The LPGA program will rely on caddies capturing the data through a pre-formatted scorecard, which then will be processed and analyzed by KPMG. The women would have access to the popular “strokes gained” statistics off the tee, to the green and putting, along with shot dispersion and proximity to the hole from various distances.

“We think it's going to be closing, again, that disparity that's existed for many years where men have had that kind of data at their disposal to improve their games, but women have not,” said Paul Knopp, the U.S. chair and CEO of the KPMG. 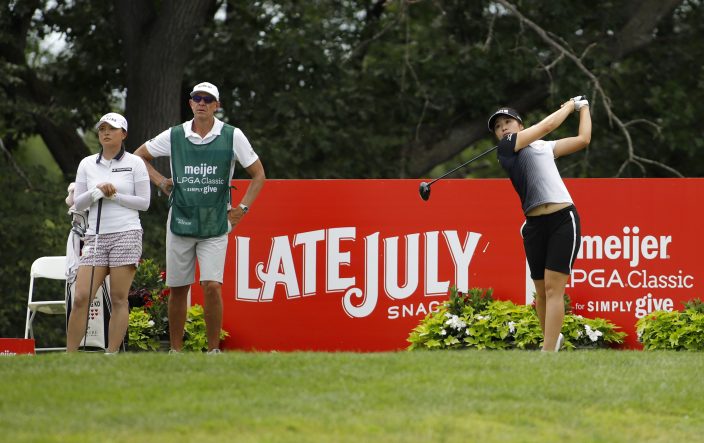 “We just couldn't be prouder to bring our data and analytics experts to bear to provide that solution for the LPGA Tour.”

It starts this week at the Women's PGA Championship at Atlanta Athletic Club, a course that serves as another reminder of elevating the women's game.

Since KPMG has come on as a title sponsor — a product of the LPGA and PGA of America jointly running the event — this major has gone to courses made familiar by men's major championships. That list includes Sahalee, Hazeltine and Aronimink. Next year it goes to Congressional, followed by Baltusrol. 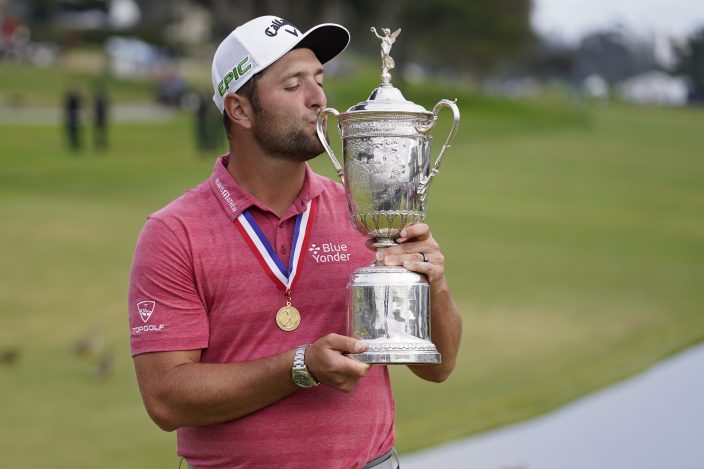 But the statistics stand out as a big step.

The LPGA Tour for years has relied primarily on fairways and greens hit and number of putts taken, the kind of data any weekend golfer can track.

Performance Insights is a similar model to what's used on the European Tour, and while the turnaround isn't as immediate, it will provide a package of statistics the LPGA has never had. 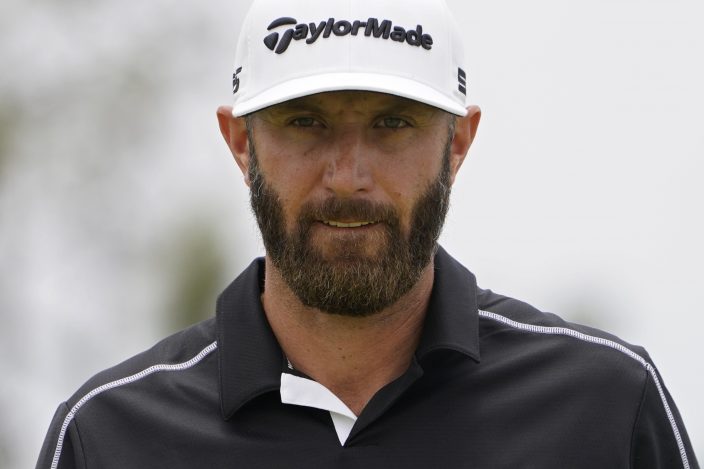 Dustin Johnson walks to his bag after making a putt on the fourth green during the final round of the U.S. Open Golf Championship, Sunday, June 20, 2021, at Torrey Pines Golf Course in San Diego. (AP PhotoJae C. Hong)

“I think it’s great to see where your flaws are,” Brooke Henderson said. “Sometimes you think that you miss a lot of left-to-right putts, but when you see it in writing, it really confirms that, and you know exactly what you need to work on. I think it will be great, too, for the fans to really see each player in much more detail.”

Players and caddies have been collecting such data in the weeks leading into the Women's PGA Championship ahead of the official launch. 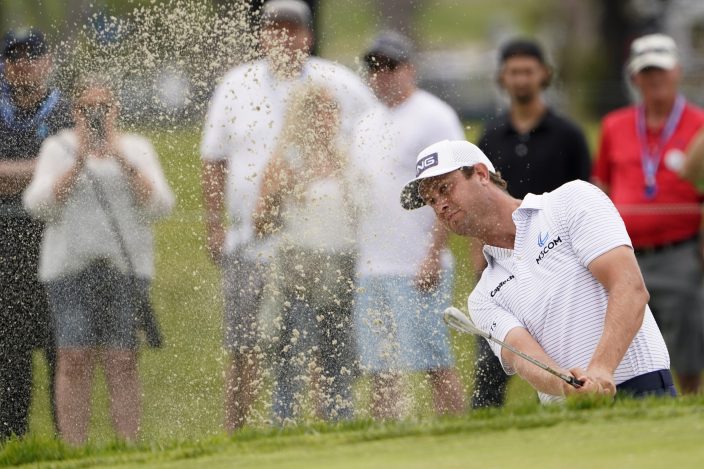 Harris English plays a shot from a bunker on the second hole during the final round of the U.S. Open Golf Championship, Sunday, June 20, 2021, at Torrey Pines Golf Course in San Diego. (AP PhotoJae C. Hong)

For the PGA Tour regulars headed over to Royal St. George’s for the British Open, it will be a hard reminder of what life was like a year ago when golf returned from the COVID-19 pandemic. It won’t be like any of the British Opens they have played before.

According to a memo the R&A sent out Tuesday, players are allowed to bring a caddie and no more than two “player support team members,” which includes a coach, manager, trainer, translator or family member.

Players and caddies are exempt from the quarantine under an “Elite Athlete Exemption.” The family member has to go through whatever quarantine is required depending on the country of origin. They all will be subject to strict “inner bubble” restrictions, meaning they can’t mix with anyone outside the bubble at restaurants or other public areas.

Rickie Fowler watches his shot into the second green during the final round of the Memorial golf tournament, Sunday, June 6, 2021, in Dublin, Ohio. (AP PhotoDarron Cummings)

As for housing, there can be no more than four people in a private house, and the four must be part of the player’s own group. For example, it’s typical for Jordan Spieth, Justin Thomas and Rickie Fowler and their significant others to stay together on the road. That won’t be allowed.

The R&A said some of the restrictions could be eased as the situation evolves.

A CHANGE AT THE TOP

One stroke is what cost Dustin Johnson his long stay at No. 1 in the world. Jon Rahm won the U.S. Open and returned to No. 1 when Johnson finished with a par and wound up in a four-way tie for 19th.

And so ended his bid to stay atop the world ranking for the entire calendar year, something no one has done since Tiger Woods in 2009.

Johnson looked to have the best chance during a torrid stretch last year of being runner-up at the PGA Championship, finishing first, second and a tie for third in the PGA Tour postseason (actual score), tying for sixth in the U.S. Open, runner-up in Houston and winning the Masters.

That seems like a long time ago. In his last nine starts, he has only one top 10 — a tie for 10th at the Palmetto Championship at Congaree.

Rahm, meanwhile, became the first player to reach No. 1 by winning the U.S. Open.

The joy of winning the U.S. Open was tempered ever so slightly for Jon Rahm as he thought about a journalist.

Jose Manual Cortizas — known as Corti among his friends — covered basketball for a newspaper in Bilbao where Rahm grew up. He knew nothing about golf. But when Rahm turned pro and delivered early on his lofty expectations, the newspaper owner wanted him to cover golf.

“He jumped on a plane and started following me around the world,” Rahm said. “He had never stepped foot on a golf course, and he had no idea what was going on.”

Rahm won three times in each of his three full seasons as a pro, and Corti was along for the ride. He tested positive for the coronavirus early this year and died shortly thereafter.

Rahm looked over at his silver trophy and said, “This right here is definitely for him because he would have loved more than anybody else to be here covering this.”

Arizona State graduates have won the last two majors, with Phil Mickelson at the PGA Championship and Jon Rahm at the U.S. Open. ... Rickie Fowler announced on Instagram that he and his wife, Allison, are expecting their first child in November. ... This is the final week before the women's field for the Olympics is set. Jessica Korda is No. 13 in the world and must stay in the top 15 to give Americans four players in Tokyo. South Korea is set with four in the top eight.