Matt Chapman and Ramon Laureano hit two-run home runs in the first two innings and Cole Irvin earned his second straight win as the Oakland A’s capitalized early on Texas’ unorthodox sequence of pitchers, racing to an early nine-run lead on the way to a 13-6 win over the Rangers on Tuesday night.

Irvin (5-7) cruised through four scoreless innings on 40 pitches before allowing four runs on four hits and a hit batter in the fifth. 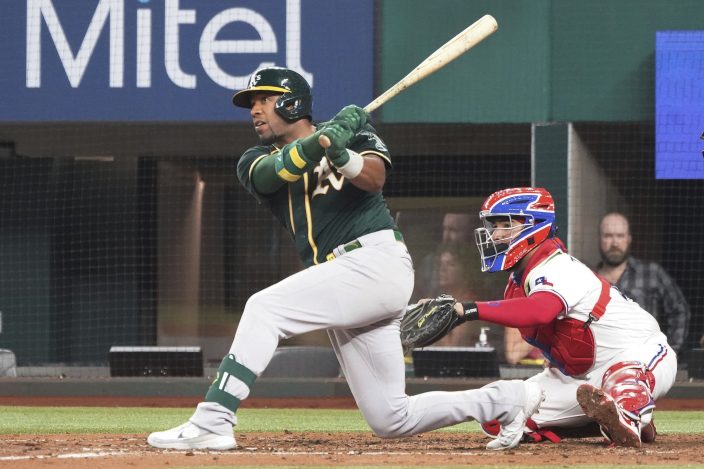 Taylor Hearn (2-2), making his second start in 38 major league appearances and the first since his MLB debut in April 2019, was chased early. He was charged with four runs in the first inning on two hits and three walks, throwing 34 pitches and recording two outs.

Texas manager Chris Woodward had said he hoped to get about 50 pitches from Hearn before turning to veteran starter Jordan Lyles, who gave up four home runs in 4 1/3 innings in his most recent start last Wednesday at Houston.

Eli White and Joey Gallo homered in the seventh and eighth innings to account for Texas’ other runs. 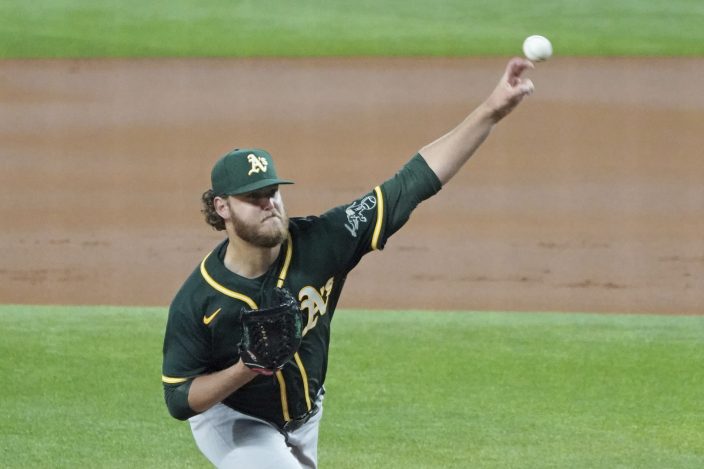 The Rangers were trying to win consecutive games for the first time since May 21-23, after snapping a six-game losing streak Monday. Texas has 20 of its last 24 games.

Hearn began the game by walking Canha on four pitches, then served up Chapman’s homer to dead center. When Woodward brought in Brett de Geus with two out and the bases loaded in the inning, Andrus hit a two-run single up the middle.

Laureano homered to center in the second off de Geus. Lyles came on to start the third inning, allowed two runs on three hits and then worked five scoreless on two singles. After Lyles departed, Oakland added four runs on five hits in the ninth inning off Demarcus Evans. Texas Rangers starting pitcher Taylor Hearn (52) stands on the mound as he awaits a visit from manager Chris Woodward in the first inning against the Oakland Athletics in a baseball game Tuesday, June 22, 2021, in Arlington, Texas. (AP PhotoLouis DeLuca)

The Rangers scored four runs in the fifth on RBI hits by Willie Calhoun, Charlie Culberson, White and Adolis Garcia.

Chapman has a 10-game hitting streak. … Rangers pitching has allowed homers in a club-record 17 straight games. … Irvin has a 3.15 ERA on the road compared to 4.53 at home. … All three of White’s major league homers have been in the last six games. 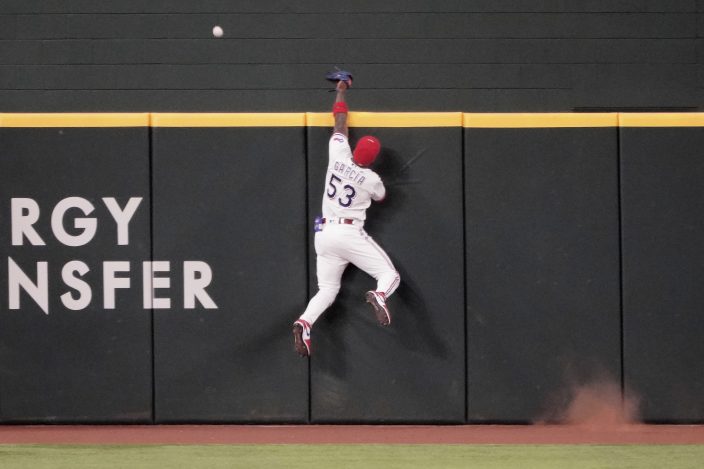 RETRANSMISSION TO CORRECTION NAME TO MATT CHAPMAN - Texas Rangers center fielder Adolis Garcia leaps but can't get the ball at the fence on a home run by Oakland Athletics Matt Chapman in the first inning of a baseball game Tuesday, June 22, 2021, in Arlington, Texas. (AP PhotoLouis DeLuca)