Shed Long Jr. hit a solo homer with one out in the eighth inning that lifted Seattle over the Colorado Rockies 2-1 on Tuesday night, the Mariners' fifth straight victory.

Two days after Long hit a game-ending grand slam in the 10th inning to complete a four-game sweep of the Tampa Bay Rays, the lefty came through again with another late long ball for the Mariners.

Long drove a 1-1 pitch from Colorado’s Tyler Kinley (1-2) to straightaway center field. It was the second straight appearance where Kinley gave up homer after he blew a save opportunity last Saturday against Milwaukee. 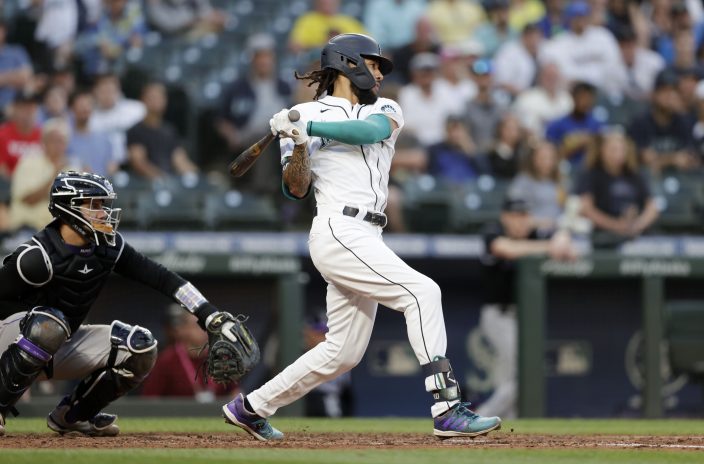 Paul Sewald (4-2) worked the eighth inning for Seattle to get the win, and Kendall Graveman pitched the ninth for his sixth save and first since May 16.

The Mariners have won eight of nine.

Seattle starter Chris Flexen was on the cusp of another dominant performance before C.J. Cron’s solo homer with two outs in the seventh inning pulled the Rockies even at 1. 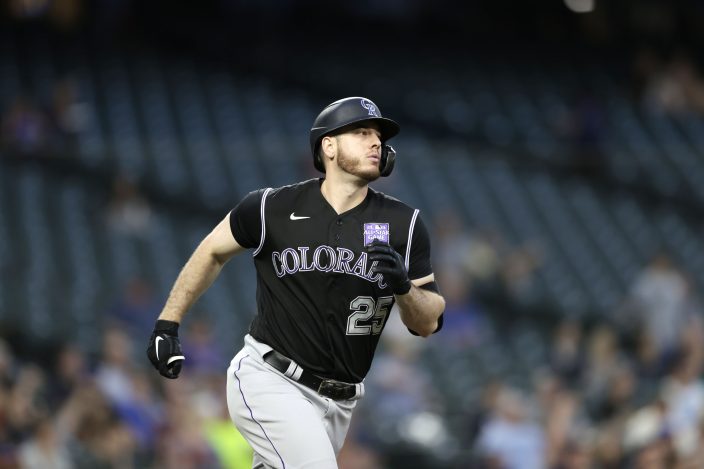 Cron caught up to a 95 mph fastball with two outs in the seventh and drove it to right-center field for his 10th homer of the season.

The home run snapped Flexen’s streak of scoreless innings at 15. But other than the brief troubles in the seventh, Flexen was outstanding. He struck out six and didn’t allow a hit until Brendan Rodgers’ single in the fifth inning. Flexen has allowed three earned runs or less in four of his past five starts.

Colorado starter Kyle Freeland recovered from three rough starts to post his best outing of the season. Freeland had allowed 18 earned runs in his past three outings, including nine home runs, but managed to stymie the Mariners bats. 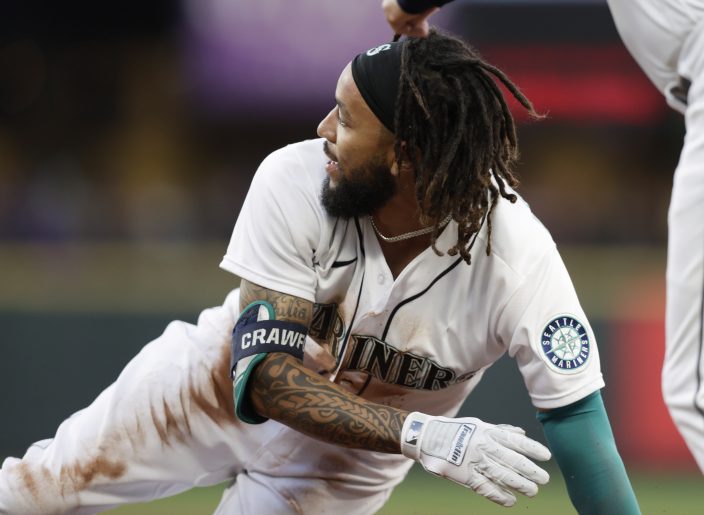 Seattle Mariners' J.P. Crawford looks back to home from the ground on first after hitting an RBI single against the Colorado Rockies during the fifth inning of a baseball game, Tuesday, June 22, 2021, in Seattle. (AP PhotoJohn Froschauer)

Freeland scattered five hits and struck out seven. The only run allowed came on J.P. Crawford’s infield hit with the bases loaded and two outs in the fifth inning. But the Mariners missed out on their chance at a big inning on Dylan Moore’s baserunning mistake and became the third out.

Rockies: RHP Jon Gray may return to the rotation this weekend against Milwaukee, manager Bud Black said. Gray made a rehab start for Triple-A Albuquerque on Sunday and threw on the side before Tuesday’s game. Gray went on the injured list earlier this month with a flexor strain. ... IF/OF Chris Owings was reinstated from the 60-day injured list shortly before the start of Tuesday’s game. Owings has been out since early April following thumb surgery. The Rockies designated RHP Joe Harvey for assignment. 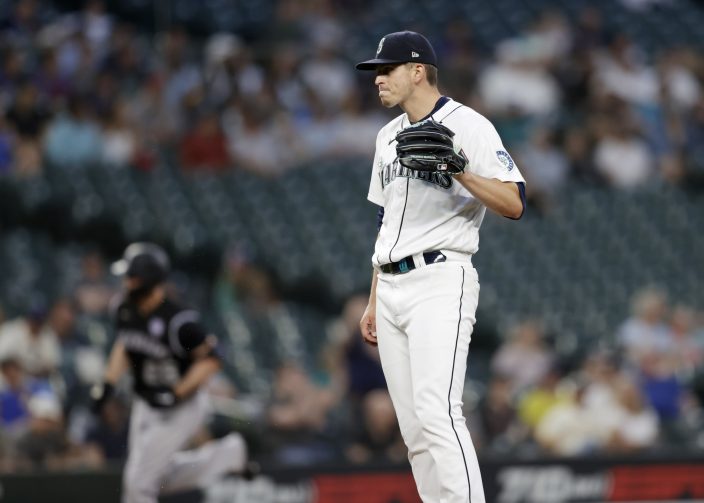 Seattle Mariners starting pitcher Chris Flexen reacts on the mound after giving up a solo home run to Colorado Rockies' C.J. Cron, passing in the background during the seventh inning of a baseball game, Tuesday, June 22, 2021, in Seattle. (AP PhotoJohn Froschauer)

Mariners: 1B Evan White was transferred to the 60-day injured list after having a setback in his recovery from a hip flexor injury while on a rehab assignment at Triple-A Tacoma. Manager Scott Servais said White had left Seattle to seek a second opinion on the injury. White has been out since May 14. Seattle claimed IF/OF Jake Hager off waivers from Milwaukee to take White’s spot on the 40-man roster. Hager will report to Tacoma. Seattle also recalled IF Donovan Walton from Tacoma and RHP Yohan Ramirez was optioned.

Rockies: RHP German Márquez (5-6, 4.26) makes his 16th start. He threw six shutout innings in his last start against Milwaukee but had to be removed early because of cramps. He’s 1-1 with a 2.08 ERA in two career starts vs. Seattle. 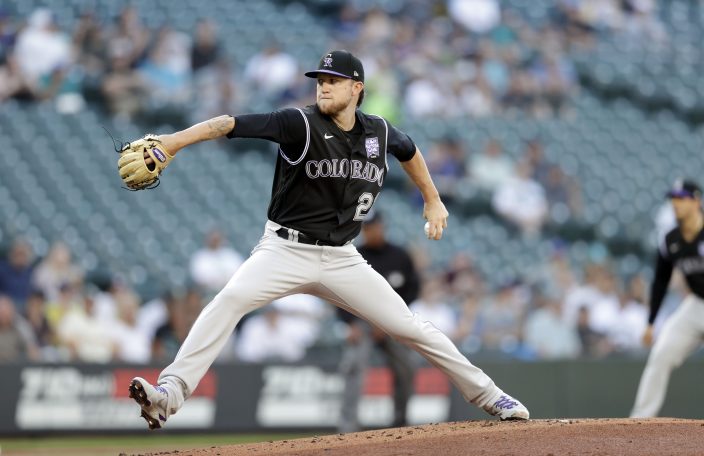 Mariners: LHP Justus Sheffield (5-6, 5.65) makes his 13th start of the season. Sheffield allowed a season-high seven runs over five innings in his last start against Minnesota. 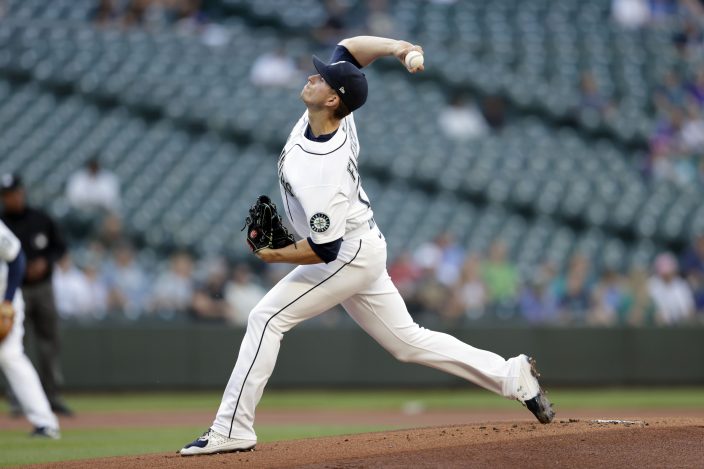