Burly slugger Daniel Vogelbach hobbled home on one leg when Arizona's defense fell asleep, and the Diamondbacks dropped back into a rut Tuesday night with a 5-0 loss to the Milwaukee Brewers.

A day after ending a 17-game losing streak, the Diamondbacks were behind from the start. Kolten Wong led off with a home run and that was plenty for Freddy Peralta and the Brewers bullpen in a combined two-hitter.

Arizona also lost star outfielder Ketel Marte, who is hitting .366. He slowed down on his way to second on a ground-rule double in the first inning and exited with tightness in his left hamstring. 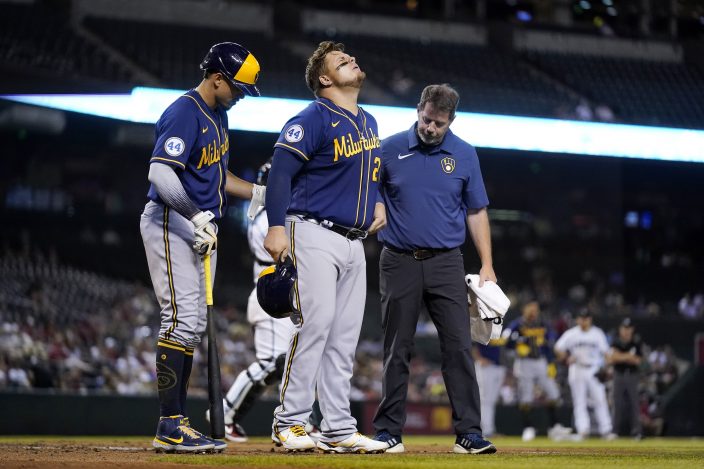 After scoring a run, Milwaukee Brewers' Daniel Vogelbach, middle, grimaces due to a leg injury as he is checked on by Brewers assistant athletic trainer Dave Yeager, right, and Brewers' Willy Adames, left, during the sixth inning of a baseball game against the Arizona Diamondbacks Tuesday, June 22, 2021, in Phoenix. (AP PhotoRoss D. Franklin)

But Vogelbach took a far more unusual path to score in the sixth.

Vogelbach was on second with two outs and the Brewers ahead 1-0 when Omar Narvaez singled to center field against reliever Stefan Crichton.

The hit normally would've scored Vogelbach without a play. But Vogelbach pulled up lame just after rounding third base and even veered away from the plate. 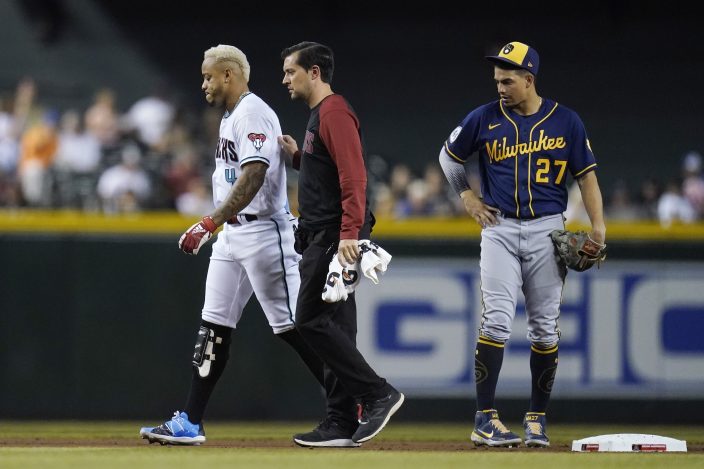 Arizona infielders Josh Rojas and Nick Ahmed, however, never saw Vogelbach in distress. Instead, they tossed the ball to each other after getting the relay despite the waving and hollering from Crichton, catcher Daulton Varsho and teammates.

In all, it took Vogelback more than eight seconds from the time he began hobbling to reach the plate. He then stopped right away, was helped off the field and was replaced at first base.

Luis Urias’ two-run single later in the inning made it 4-0. 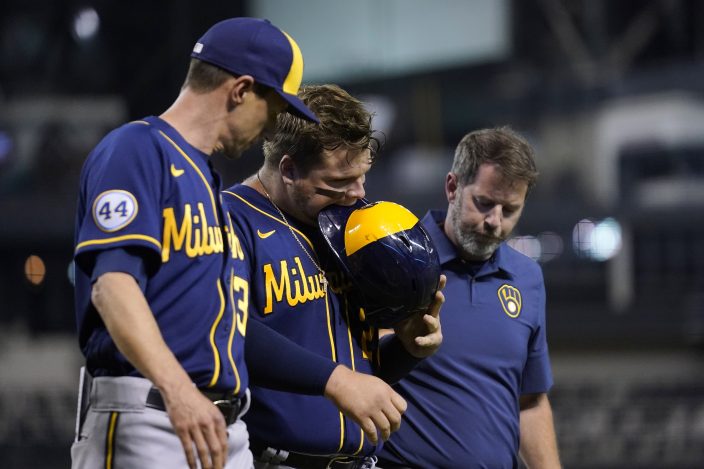 After scoring a run, Milwaukee Brewers' Daniel Vogelbach, middle, bites his helmet due to the pain of an injured leg as he is helped off the field by Brewers manager Craig Counsell, left, and Brewers assistant athletic trainer Dave Yeager, right, during the sixth inning of a baseball game against the Arizona Diamondbacks Tuesday, June 22, 2021, in Phoenix. (AP PhotoRoss D. Franklin)

Arizona's only other hit came on Pavin Smith's infield roller in the ninth.

Christian Yelich homered into the pool in right-center field off Riley Smith in the eighth for the Brewers’ final run. 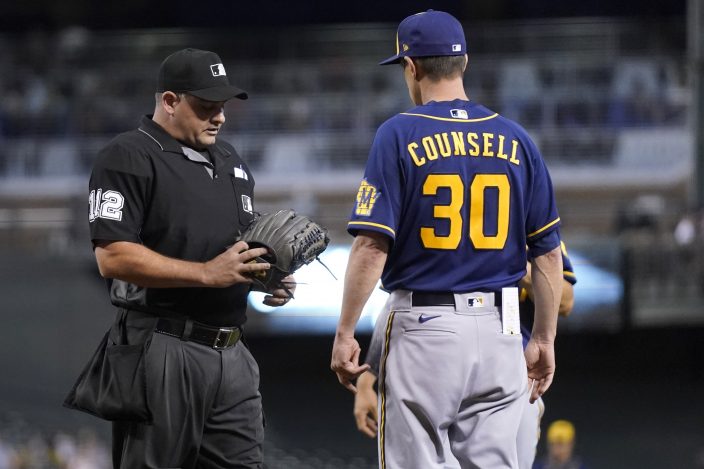 Zac Gallen (1-3), in his second start since missing six weeks with a sprained right elbow, gave up three in five innings.

The Diamondbacks fell to 2-18 in June and haven’t won back-to-back games since May 10-11 against Miami. 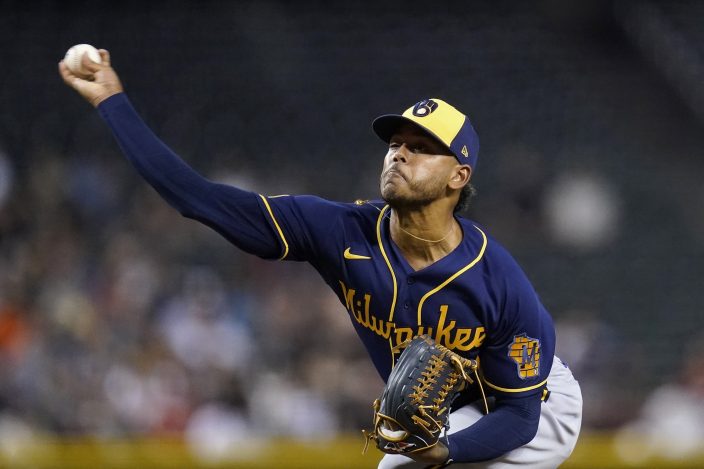 During a sixth-inning Milwaukee mound visit, the Chase Field crowd erupted in cheers. A block away, the Phoenix Suns beat the Los Angeles Clippers 104-103 at the buzzer to take a 2-0 series lead in the Western Conference finals.

Peralta was asked to change his glove before taking the mound in the bottom of the first. But it had nothing to do with umpires checking it for substances; rather, they objected to the light color of the mitt.

Diamondbacks: 3B Eduardo Escobar pinch-hit for Gallen in the fifth inning and struck out. He missed Monday’s game with a quad strain. ... RHP Tyler Clippard, who has been sidelined all season with a sprained right shoulder, threw a bullpen session before Tuesday’s game.

Brewers: LHP Brett Anderson was placed on the 10-day injured list, one day after hurting his right knee trying to beat a throw to first. Manager Craig Counsell said Anderson will be evaluated when the team returns to Milwaukee on Thursday.

Brewers: To replace Anderson, RHPs Miguel Sanchez and Ryan Weber were called up from Nashville. Milwaukee sent LHP Hoby Milner back to the Triple-A team.

OF Tyrone Taylor returned from the injured list and OF Derek Fisher was designated for assignment. Taylor appeared as a pinch-hitter in the seventh and struck out. Sanchez, making his majorleague debut, pitched a scoreless eighth inning and received hugs and high-fives from his teammates.

The promotion of Sanchez and Weber brought the Brewers’ roster total this season to 50. Only Seattle (51 entering Tuesday) has had more players in this season, which still hasn’t reached the halfway point.

“It’s been a challenge, especially with some of the guys from different organizations to try to figure out roles for them to succeed,” Counsell said.