St. Louis Blues defenseman Carl Gunnarsson announced his retirement Wednesday after playing 12 NHL seasons and scoring one of the biggest goals in that franchise's history.

After hitting the post late in regulation in Game 2 of the 2019 Stanley Cup Final, Gunnarsson memorably told Blues coach Craig Berube in the bathroom at intermission, “I just need one more." He scored 3:51 into overtime to tie the series against Boston, on the way to the Blues winning their first championship.

It was the only goal Gunnarsson scored in 68 career NHL playoff games. 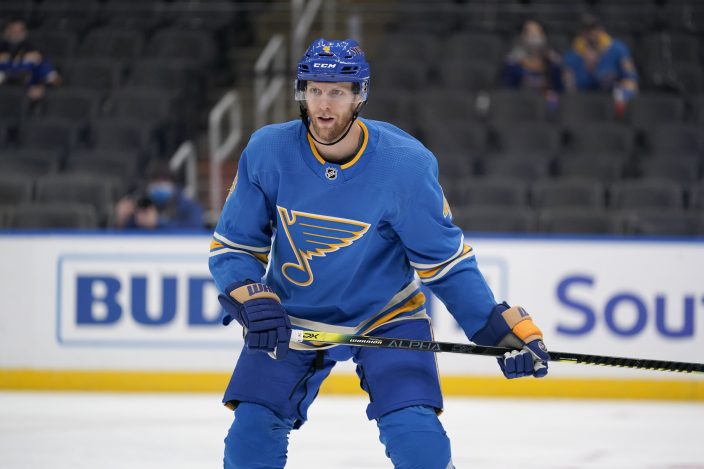 FILE - St. Louis Blues' Carl Gunnarsson is shown during the third period of an NHL hockey game against the Arizona Coyotes in St. Louis, in this Saturday, Feb. 6, 2021, file photo. Blues defenseman Carl Gunnarsson announced his retirement Wednesday, June 23, 2021, after playing 12 NHL seasons and scoring one of the biggest goals in that franchise's history. (AP PhotoJeff Roberson, File)

“Carl is the consummate professional and has been a great player for the Blues for the past seven seasons,” Blues general manager Doug Armstrong said. “From his legendary goal in Game 2 of the finals to his numerous contributions to the St. Louis community, he will continue to be a shining example for current and future Blues (players).”

The 34-year-old Swede had his 12th season in North America cut short by a knee injury in February.

Gunnarsson played 629 regular-season games for the Toronto Maple Leafs and Blues since making his NHL debut in 2009. A steady, defense-first presence on the blue line, he recorded 138 points and averaged over 18 minutes a game on the ice.