The British government faced accusations of mixed messaging Wednesday that could threaten its plan to fully lift lockdown restrictions in England next month after it decided to allow more than 60,000 people inside Wembley Stadium for the latter stages of soccer's European Championship.

Following a request from UEFA, European soccer's governing body, to allow more fans inside the London stadium for the semifinals on July 6 and 7 and the final on July 11, Britain agreed to increase capacity at the 90,000-seat stadium to 75%. That will make the three matches the largest gatherings at a sporting event since the coronavirus pandemic took root in the country in March 2020.

In contrast, only 20,000 people were inside the stadium on Tuesday night when England beat the Czech Republic 1-0.

An England supporter holds up a poster suggesting his team lineup to England's manager Gareth Southgate during the Euro 2020 soccer championship group D match between the Czech Republic and England at Wembley stadium in London, Tuesday, June 22, 2021. (Justin Tallis, Pool photo via AP)

The 75% decision has stoked worries that it will ignite a scourge of new infections in the U.K., which already has Europe's second-worst pandemic toll of 128,000 people dead and is experiencing a third wave of infections due to the delta variant first identified in India.

Professor Lawrence Young, a virologist at the University of Warwick, warned that allowing 60,000 fans to crowd into Wembley is a “recipe for disaster” given the delta variant, which scientists say said 40% to 80% more contagious.

“We are so close to getting on top of this virus with the success of the vaccination program –- why put the end of lockdown on July 19 at risk?” he said. 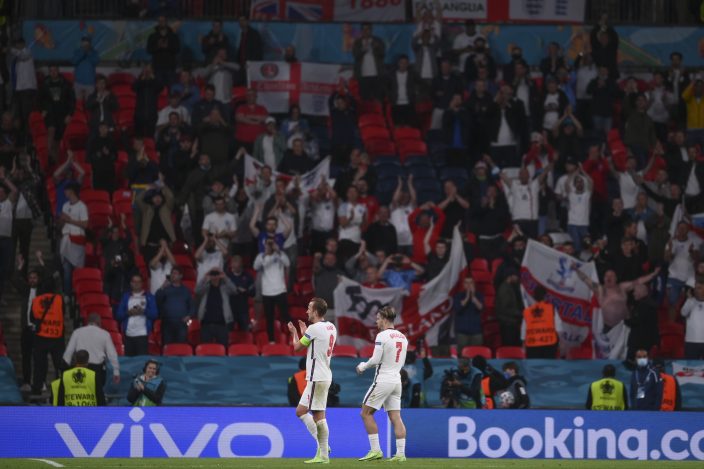 Although infections are less likely in an outdoor environment, public health experts warned that the virus could still find a way to spread, notably as tens of thousands of fans travel to and from the stadium.

“Yes, being outside will offset the risk — but there is no zero risk,” Dr. Catherine Smallwood, senior emergency officer at the World Health Organization’s Europe office in Copenhagen, told The Associated Press. “It’s not limited to the stadia themselves. It’s also around the stadia, the gatherings that happen outside of it, in bars and clubs, in households.”

Smallwood said scenes like the beer-swilling fans packed into a rocking Budapest stadium last Saturday when Hungary drew 1-1 with world champion France were “something that we should be worried about.” She urged tournament organizers to put in ”every effort" to reduce the level of risk. 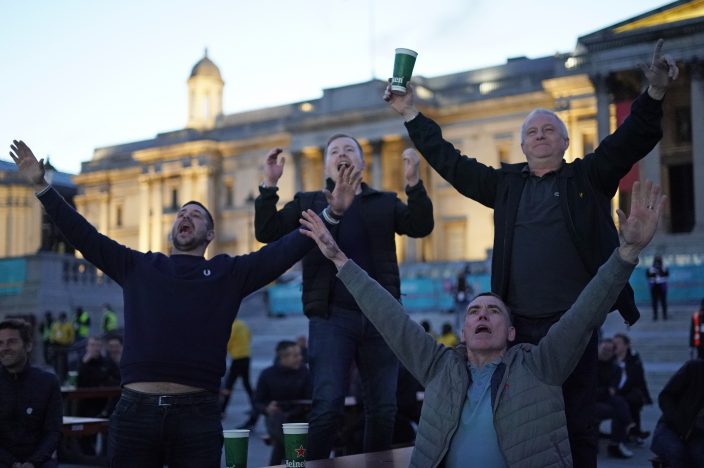 The U.K. government, meanwhile, already knows the potential negative impact of large-scale events. After all, there is evidence that a European Champions League soccer match between Liverpool and Atletico Madrid and the Cheltenham horse racing festival helped seed the virus in 2020.

Unlike most other countries in Europe, the U.K. has seen a spike in new infections over the past few weeks despite a widely lauded rollout of vaccines. The virus has been largely spreading among younger age groups, most of whom have yet to receive a dose of vaccine — cases are now running at four-month highs, above 10,000 a day.

The Conservative government hopes that its rapid rollout of vaccines will keep the current outbreak in check and limit the number of COVID-19 patients who require hospital treatment, thereby paving the way for it to lift all remaining restrictions on social contact on July 19. 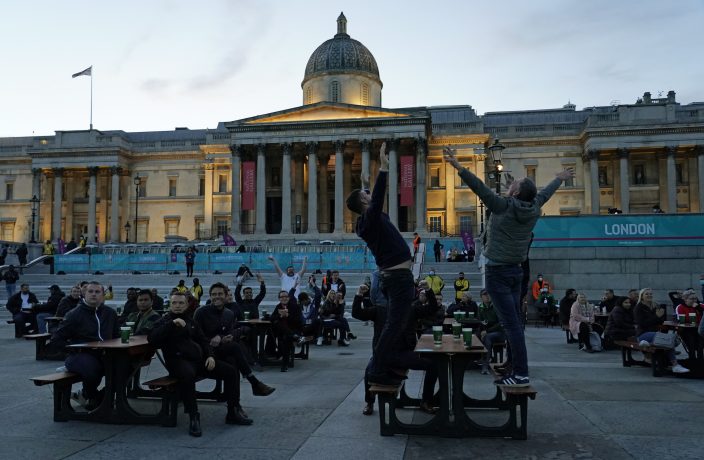 England supporters react after a goal was scored that was later disallowed in the fan zone in Trafalgar Square in London, Tuesday, June 22, 2021 during the Euro 2020 soccer championship group D match between England and the Czech Republic at Wembley Stadium. (AP PhotoAlberto Pezzali)

It says the increased capacity for the Wembley matches — and the finals at the Wimbledon tennis tournament on the weekend of July 10 and 11 — will be part of its Event Research Programme on holding mass events safely that it has been running over the past few months. It also said all ticket-holders for the matches must show evidence of a negative COVID-19 test or proof of two vaccine doses — something that's not required when fans go to a watch a match in a pub.

Whittingdale also indicated the government will grant UEFA's request for around 2,500 VIPs — such as officials, politicians, sponsors and broadcasters — to be allowed to enter the country for the latter stages of the tournament without having to quarantine. He said, however, their movements will be severely constrained. 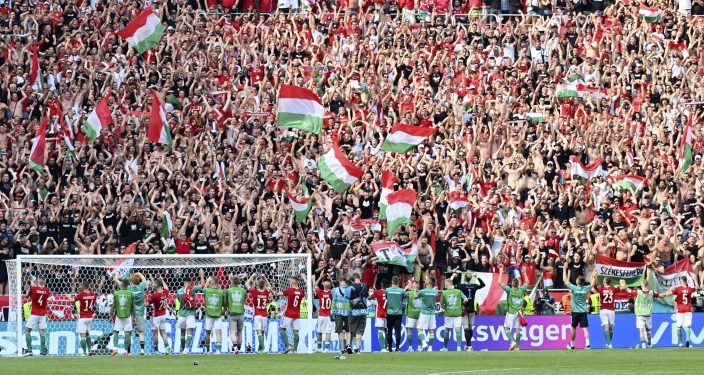 Hungary's players celebrate with their fans after the Euro 2020 soccer championship group F match between Hungary and France at the Ferenc Puskas stadium in Budapest, Hungary Saturday, June 19, 2021. (Tibor IllyesPool via AP)

Right now most travelers returning to the U.K. face 10 days of quarantine at home and those from high-risk countries must quarantine at special hotels.

“Those who are allowed to come into the country in order to attend the match come in for precisely that,” he told broadcaster ITV. “They’re not allowed to just go on a tour of Britain whilst they’re here. They come in, they stay in a designated place, they attend the match, and then they leave.”

Stephen Reicher, a professor of social psychology at the University of St. Andrews in Scotland, warned that people could easily get confused about the messaging from the government at a critical time in the pandemic. 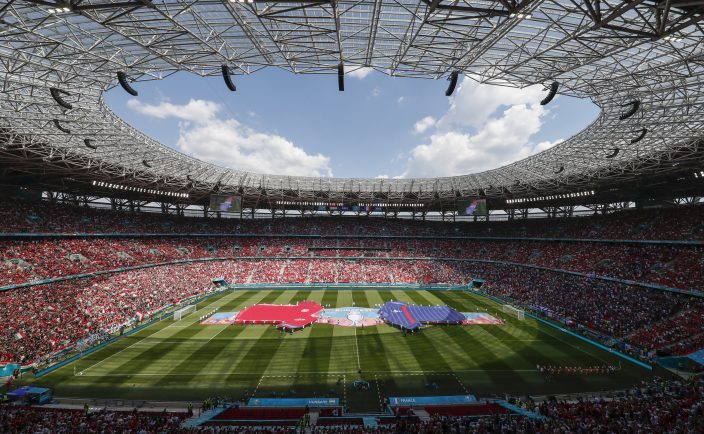 “If we live in a society which tells us ‘Well, it’s fine for 60,000 people to meet at Wembley,’ it’s very hard at the same time to say to people, ‘Look, there’s still a pandemic out there, and we’ve still got to be careful’,” he told BBC radio.

If England's national team were to make the latter stages of the tournament, then the capacity issues at Wembley may be overridden by other ways of spreading of the virus as fans celebrate or commiserate together.

After all, England has not won a major tournament title, let alone made a final, since it hosted the 1966 World Cup.