The Lisbon region’s surge in COVID-19 cases is powering ahead, with new infections pushing Portugal’s daily new cases to a four-month high as a report by health experts finds fault with the government's pandemic response.

Portugal on Wednesday reported almost 1,500 new cases, two-thirds of them in the capital region where 2.8 million people live. Three people died in Portugal of COVID-19 over 24 hours. 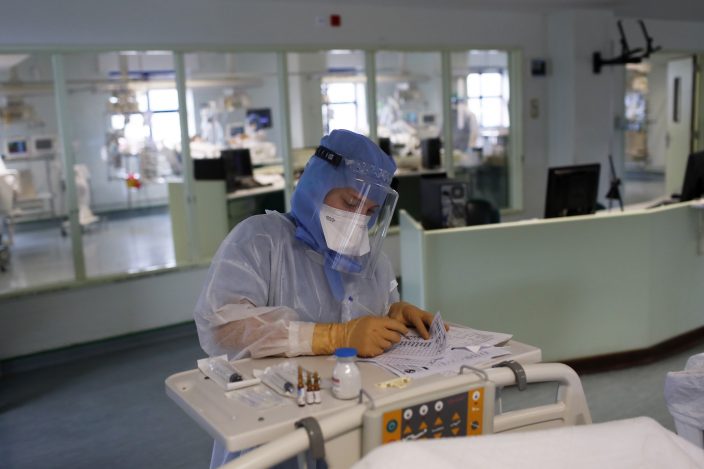 FILE - In this Feb. 11, 2021 file photo, a nurse prepares medication in a COVID-19 Intensive Care Unit at the Curry Cabral hospital in Lisbon. Portugal is witnessing a surge in new daily cases not seen since February according to Portuguese authorities Thursday June 17, 2021, while public hospitals are not yet under pressure, some of them are readying for more COVID-19 admissions. (AP PhotoArmando Franca)

The pressure on hospitals remains manageable, with 437 virus patients admitted and 100 in intensive care. The Portuguese government has already banned travel into and out of the Lisbon region on weekends, though policing last weekend was patchy.

Experts blame the delta variant for Lisbon's virus spread, estimating it accounts for more than 70% of cases. The government is widely expected to announce new restrictions for Lisbon after a Cabinet meeting on Thursday.

To step up the pace of vaccinations, authorities on Wednesday reopened an inoculation center at Lisbon University’s sports stadium that is being operated by the Portuguese armed forces. Beginning Monday, a walk-in vaccination center will open in the capital's riverside neighborhood of Alcântara.

Meanwhile, the head of the national vaccination task force said he hopes to hit the target of 70% of the population inoculated by the third week of August.

That is later than the initial plan, which was to reach the goal in early summer, but Rear Admiral Henrique Gouveia e Melo said Portugal is receiving fewer vaccine doses than the 130,000 jabs a day it can administer.

Also Wednesday, a report by health experts into Portugal’s handling of the COVID-19 pandemic warned that the country is not learning from what happened over the past 15 months. The report said there was “a worrying absence of drawing conclusions from what went wrong.”

The report for the Portuguese Observatory of Health Systems, which groups current and former public health chiefs, said it was good that the country's main political parties stood together and that the Portuguese mostly complied with the rules on social distancing and mask-wearing.

But it said politicians pressured health experts to give them recommendations that were more politically “convenient” and that the National Council for Public Health was barely used and is severely underfunded. Also, it said, authorities have not activated two specialist units to improve the country's pandemic response.

“We are not learning through this experience what we need to do better in the future,” the report said.