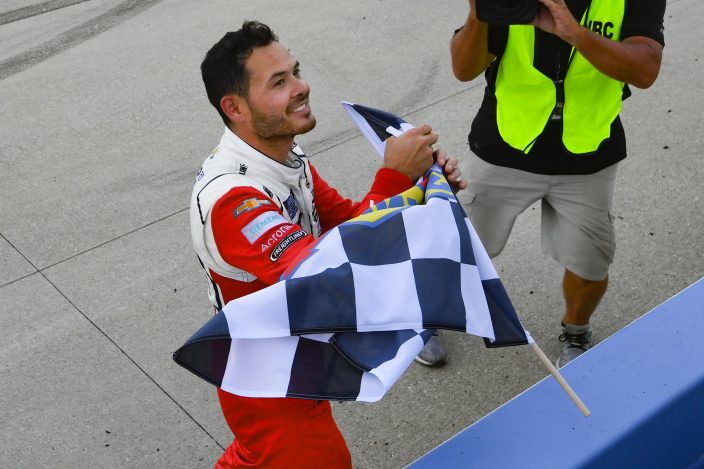 Last race: Kyle Larson won at Nashville, his third straight victory in a points race and fourth straight main event overall. He also won the All-Star race at Texas during the streak.

Fast facts: Larson, who had three consecutive second-place runs before starting his winning streak, is the first driver since Jimmie Johnson to win three straight points races. Johnson won four straight in 2007. ... Denny Hamlin remains the points leader without a win this season, though his lead has dipped to 10 points over Larson with William Byron third, 81 points back. ... Byron leads all drivers with 13 top-10 finishes, and Larson leads with nine top-fives. ... Larson's 1,426 laps led lead all drivers; Hamlin is next,670 behind. ... Hamlin and 11th-place Austin Dillon are the only drivers to finish on the lead lap in all 17 races.

Last race: Kyle Busch led 122 of 189 laps at Nashville and raced to his 100th career victory in the series.

Fast facts: Busch has won all three of his starts in the series this season. His 100 wins are more than double the previous record of 49 wins by Mark Martinhave and have come in 360 starts (27.7%). ... Justin Allgaier finished second followed by Busch's Joe Gibbs Racing teammate Harrison Burton and Josh Berry. ... Defending series champion Austin Cindric's points lead over A.J. Allmendinger is now 90 with Daniel Hemric 100 back.

Last race: Ryan Preece passed Grant Enfinger for the lead with seven laps remaining at Nashville to win in his first career start in the series.

Fast facts: Preece, a Cup Series regular, became the fifth driver to win in his Truck Series debut. He raced to get track time ahead of the first Cup Series race at the track two days later. ... John Hunter Nemechek had a two-race winning streak snapped but remains the points leader by 70 over Ben Rhodes and 98 over Austin Hill. ... Only three races remain on the schedule before the field of 10 drivers begins the playoffs Aug. 20 in Madison, Illinois.

Last race: Max Verstappen made two pit stops pay off, passing Hamilton, who stopped once, with two laps to go to win the French Grand Prix.

Fast facts: Verstappen leads Hamilton 131-119 in the point standings and Verstappen's Red Bull teammate Sergio Perez is third with 84 points. ... Hamilton and Verstappen share the series lead with three victories each, but Red Bull has won the last three races. ... This is the first of two consecutive races in Austria. The first was added after a pandemic breakout in Turkey shelved the race planned there earlier this season.