They said the meeting would take place on Sunday in Rome but neither side offered any details about the agenda, which is likely to focus on Israel's concerns about a possible U.S. return to the Iran nuclear deal and Israel's security more broadly.

It will be their first meeting since Lapid assumed his position after longtime Israeli Prime Minister Benjamin Netanyahu was ousted. The discussion comes as Israel’s new government led by Prime Minister Naftali Bennett seeks to mend relations with U.S. President Joe Biden’s administration. 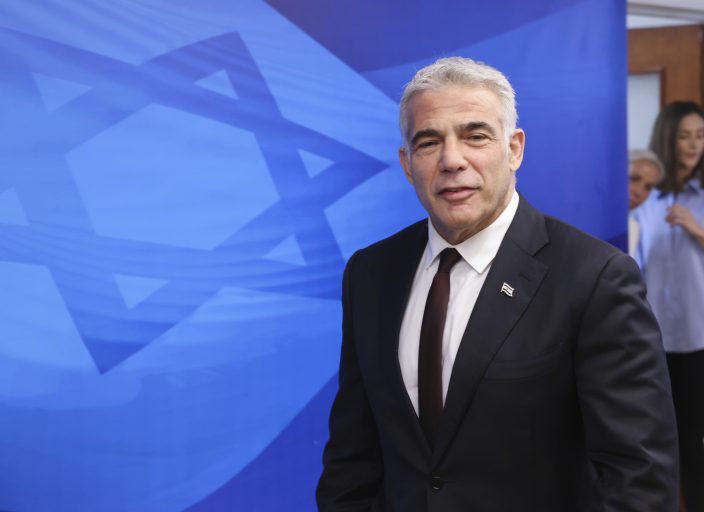 Israeli Alternate Prime Minister and Foreign Minister Yair Lapid arrives for the first weekly cabinet meeting of the new government in Jerusalem, Sunday, June 20, 2021. Prime Minister Naftali Bennett opened his first Cabinet meeting on Sunday since swearing in his new coalition government with a condemnation of the newly elected Iranian president, whom he called “the hangman of Tehran.” (Emmanuel DunandPool Photo via AP)

The leaders have inherited a relationship that is at once imperiled by increasingly partisan domestic political considerations and deeply bound in history and an engrained recognition that they need each other.

Bennett’s government says it wants to repair relations with Democrats and restore bipartisan support in the U.S. for Israel that former President Donald Trump attempted to turn into a Republican monopoly. Biden, meanwhile, is trying to pursue a more balanced approach on the Palestinian conflict and Iran by restoring ties with the Palestinians and entering into indirect negotiations on the nuclear agreement that Trump withdrew from.

The relationship is critical to both countries. Israel has long regarded the United States as its closest ally and guarantor of its security and international standing while the U.S. counts on Israel’s military and intelligence prowess in a turbulent Middle East.