Hundreds of industry workers, including travel agents, pilots and cabin crew from airlines such as British Airways and easyJet, gathered outside the parliament in London. There were other protests in Edinburgh and in Belfast.

Derek Jones, head of luxury travel firm Kuoni, said the outbound travel sector has been “decimated" by the coronavirus pandemic, as well as by the government’s “haphazard” response. 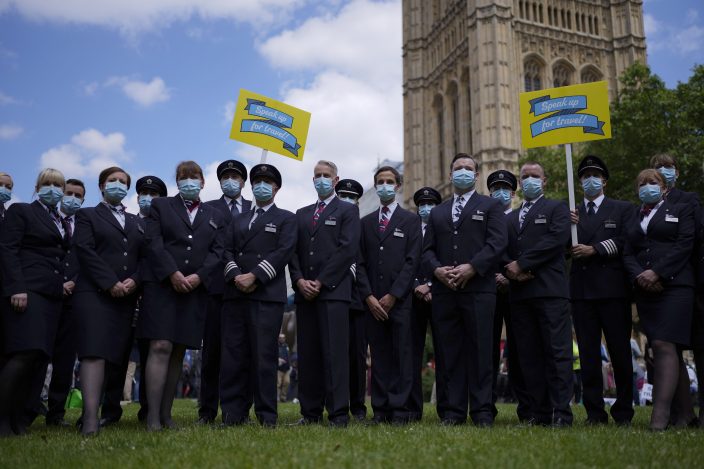 British Airways flight and cabin crew pose for photographers as they take part in a 'Travel Day of Action' protest across the street from the Houses of Parliament in London, Wednesday, June 23, 2021. The protest on Wednesday was attended by people from across the UK aviation and travel industry calling on the British government to safely reopen international travel for the peak summer season to protect travel jobs and businesses amidst Britain's widely praised rollout of coronavirus vaccines. (AP PhotoMatt Dunham)

“We are united in one message today," he said. "We want to see the safe reopening of international travel alongside targeted financial support for businesses which have not been able to trade for well over a year.”

According to industry body ABTA, an estimated 195,000 jobs have been lost across the sector and many more remain at risk.

One demand from the sector is for the government to expand the number of countries that are on its so-called “green list,” which allows quarantine-free travel on return to England. None of the popular holiday destinations in Europe are on the list, which numbers just 11 countries and territories.

“The evidence and data exists for government to make transparent policy decisions and the forthcoming review must provide clarity on how and when restrictions can be safely reduced for travel between low risk countries and for vaccinated and recovered passengers,” said Dale Keller, chief executive of the Board of Airline Representatives U.K.

The government is set to update its traffic-light system in coming days, but few changes are expected. There is speculation that Malta and Spain's ever-popular Balearic Islands, which include Majorca and Ibiza, may be added to the list.

Malta and Spain are currently on the “amber list” alongside other popular summer hotspots such as Portugal, Italy, Greece and the United States. A 10-day quarantine period at home is required for people returning from those locations.

The industry has accused the government of undermining its system, by urging people to avoid holidays to locations on the amber list.

A debate is taking place within government as to whether people who have been fully vaccinated against the virus should be eligible for quarantine-free travel if they return from one of the countries on the amber list.

British Transport Secretary Grant Shapps said the government has provided unprecedented financial support, and expressed hope that “the world could open up” soon.

“I’m optimistic that the world is catching up with where we are in our vaccination program," he said.

One problem the sector faces is that infections in the U.K. are on the rise, whereas they are falling across much of Europe — on Wednesday, government figures showed another 16,135 new infections, the highest daily rate since Feb. 6. The divergence has prompted many governments in the continent to slap tougher restrictions on those arriving from the U.K.