By highlighting cities that played host to significant events during the civil rights movement, a new book aims to make that complex history easier to understand and to pass its legacy on to younger generations.

“The Official United States Civil Rights Trail” companion book includes a timeline of events from 1954 through 1969 and then features 14 cities where people can visit sites that help bring that history to life. Author Lee Sentell, director of the Alabama Tourism Department, said he wanted to break the story down into easily digestible pieces.

“We wanted to make it easy for people to understand things about civil rights that they didn't know before, and so we decided to divide it up by cities where there are a major number of places to visit, not just where something happened but where people can go and visit and learn the story,” Sentell said. 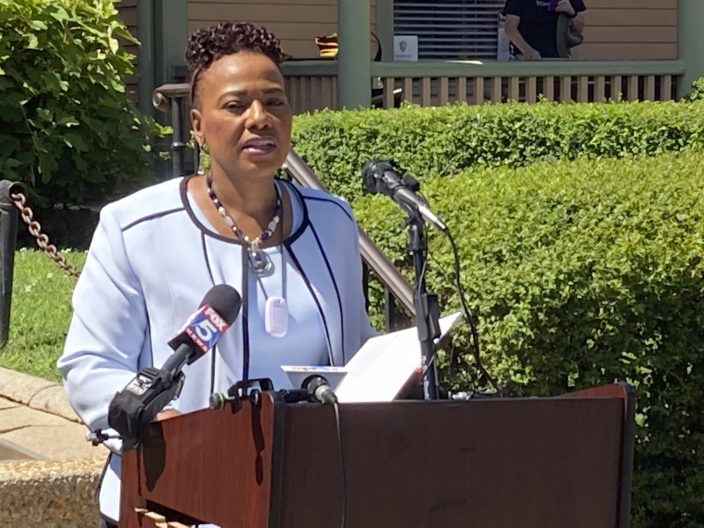 The Rev. Bernice King, daughter of the Rev. Martin Luther King Jr. and CEO of The King Center in Atlanta, speaks in front of her father’s birth home on Wednesday, June 23, 2021, at an event launching “The Official United States Civil Rights Trail” companion book. The U.S. Civil Rights Trail includes more than 120 sites — churches, schools, courthouses, museums — across 15 states, mostly in the South. The new companion book includes more than 200 images of those landmarks today, as well as photographs from the civil rights era. (AP PhotoKate Brumback)

He spoke in an interview Wednesday outside the Rev. Martin Luther King Jr.’s birth home in Atlanta before an event launching the book.

The U.S. Civil Rights Trail, which debuted in 2018, includes more than 120 sites — churches, schools, courthouses, museums — across 15 states, mostly in the South. They are places where activists fought to advance social justice and racial equality in the 1950s and 1960s. The new companion book includes more than 200 images of those landmarks today, as well as photographs from the civil rights era.

After working with tourism directors around the South to establish the trail, Sentell decided to put together a companion book after a conversation with the Rev. Bernice King, daughter of the civil rights leader and CEO of The King Center in Atlanta.

That, Sentell said, is what prompted him to make the stories of the civil rights movement more accessible by writing the book and putting it all online as well.

Speaking at the launch event, King said it's imperative for people to learn about the people and events that helped put an end to legal segregation.

"It’s important that families all across this nation — regardless of race, ethnicity — bring their children to these historical sites to learn the stories of brave, courageous, visionary, non-violent individuals who changed the South forever,” she said.

Noting that she was speaking in front of the house where her father lived as a child, she told a story from his childhood about how one day the parents of some white children he was friends with refused to let them come out and play. That's when his parents explained to him the history of slavery, segregation and Jim Crow, she said.

“My father, at that moment, made up in his little 6-year-old mind that 'I'm going to do something about these conditions,'” she said.

When young people visit the civil rights landmarks or read the companion book, they should be similarly inspired to make changes to the world around them, whether it's addressing poverty, the wealth gap, voting rights, police brutality, education inequity or the school-to-prison pipeline, she said.

King said the civil rights sites featured on the trail serve as a reminder of what can happen “when ordinary people have a commitment and a willingness to do whatever’s necessary to bring about change.”