Brazilian Environment Minister Ricardo Salles announced his resignation Wednesday, giving up his post amid sharp criticism of his tenure and two investigations into his actions involving allegedly illegal timber operations.

The move comes as talks with the U.S. government aimed at curbing Amazon deforestation have hit obstacles. Salles had insisted Brazil needs external financial support to take stronger action, while critics cautioned Washington to await concrete results before reaching any agreement with a Brazilian administration that has hobbled enforcement of environmental laws.

“I understand that Brazil this year and next, for its international and national agenda, needs a very strong union of interests and efforts and, so that can be done as smoothly as possible, I tendered my resignation to the president,“ Salles told reporters at the presidential palace. 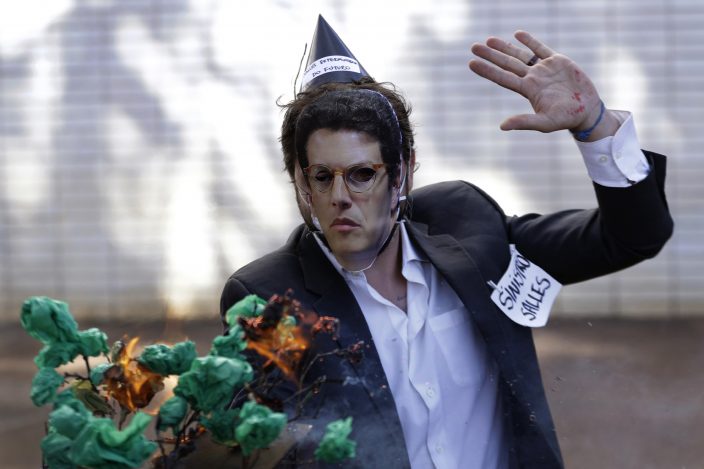 Salles and President Jair Bolsonaro have been outspoken supporters of development in the Amazon, which critics say has encouraged land grabbing and illegal mining in protected areas. As some foreign investors began expressing concern about surging deforestation, Bolsonaro's administration received no rebuke from then U.S. President Donald Trump on his environmental policies.

On the campaign trail last year, U.S. President Joe Biden called on Brazil to curb Amazon deforestation in order to slow climate change, and this year his administration began talks with Salles' ministry in an attempt to find solutions.

Preliminary data, based on satellite images, has shown year-on-year increases of Amazon deforestation for three straight months, most recently by 41% in May. The data is considered a reliable leading indicator for more complete calculations released at year end. 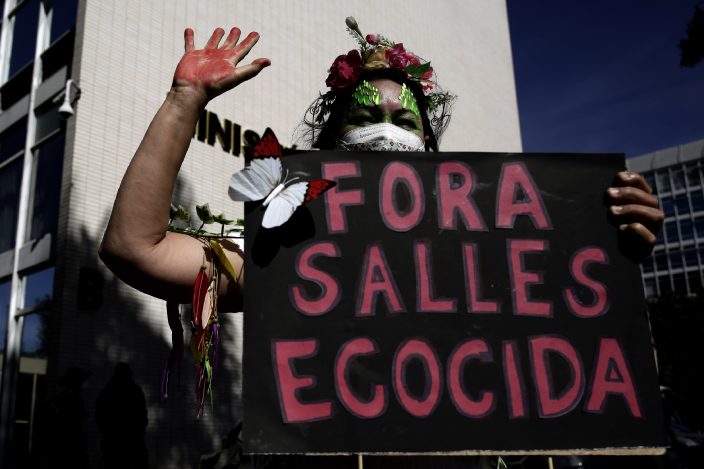 An activist holds a poster with a message that reads in Portuguese: "Out Salles Ecocida" directed at the Environment Minister Ricardo Salles, during a protest against the government's environmental policies, marking World Environment Day, in Brasilia, Brazil, Saturday, June 5, 2021. (AP PhotoEraldo Peres)

Talks between the Biden administration and the environment ministry are "paralyzed,″ Sen. Katia Abreu, who heads the Brazilian Senate's foreign relations committee, said in a statement Tuesday provided to The Associated Press. She said that reflects U.S. dissatisfaction and the need for changes by Brazil in order to reestablish dialogue.

The spokesperson for the U.S. Embassy in Brasilia, Tobias Bradford, said in a statement that the United States remains committed to partnering with Brazil to address climate change and that its stance regarding conversations with its government hasn't changed.

Neither Bradford nor Brazil's environment ministry provided information regarding the date of the last meeting. 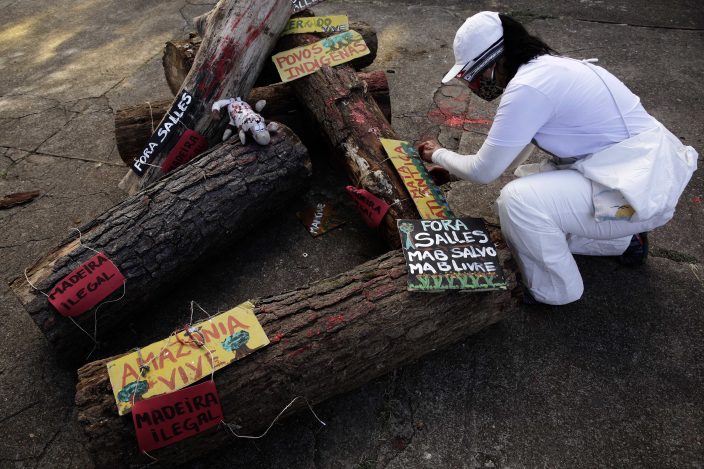 Environment ministry officials including Salles are under investigation for possibly facilitating the export of illegally cut timber. A separate probe is investigating whether Salles obstructed an operation to seize illegal timber. Salles has denied wrongdoing in both cases.

“It isn't possible for people to criminalize different opinions, points of views. Brazilian society needs that advance,“ Salles said Wednesday. “We experience a lot of objections over measures that were taken or planned, an attempt to characterize them as disrespecting laws or the constitution, which isn't true.”