A Colorado man was shopping when he heard the gunfire that killed a suburban Denver police officer, rushed out of the store with his gun and shot the suspect, according to a worker who saw the shooting.

Bill Troyanos told Denver news station KMGH-TV that he was working at the Army Navy Surplus store in downtown Arvada on Monday when he and a man later identified by police as 40-year-old John Hurley heard shots and spotted a gunman in a plaza outside. Troyanos said Hurley rushed to confront the shooter.

“He did not hesitate; he didn’t stand there and think about it. He totally heard the gunfire, went to the door, saw the shooter and immediately ran in that direction,” Troyanos said. “I just want to make sure his family knows how heroic he was.” 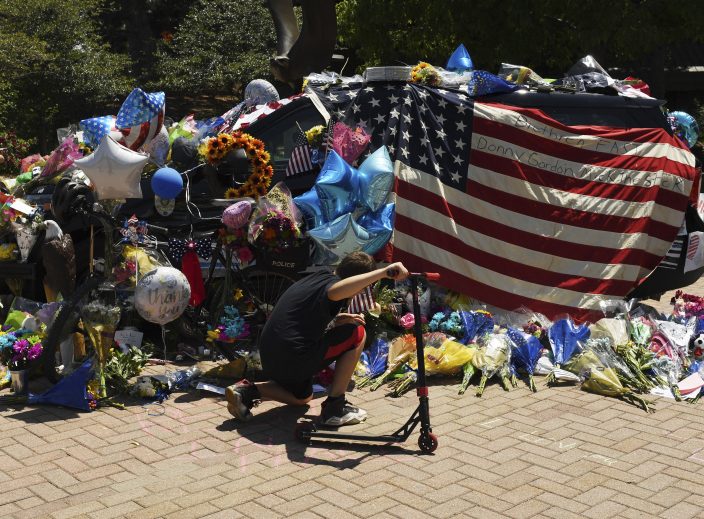 Austin Welch, 11, rode his scooter from his home in Arvada to place flowers on a memorial for Arvada Police Officer Gordon Beesley on June 22, 2021 in Arvada, Colo. Flowers, flags and notes cover a patrol car and bike outside Arvada City Hall after Beesley was killed during a shooting in Olde Town Arvada. (RJ SangostiThe Denver Post via AP)

Troyanos said he heard five or six shots fired from Hurley’s gun. The gunman, identified by police as 59-year-old Ronald Troyke, fell against a parked vehicle, he said.

Hurley, who lived in the city of Golden, was killed, as were the gunman and Arvada police Officer Gordon Beesley, a 19-year department veteran and beloved school resource officer. Police have not said who shot Hurley or the gunman.

Police Chief Link Strate on Tuesday called Hurley a “true hero who likely disrupted what could have been a larger loss of life.” He said the gunman targeted the officer because he was wearing an Arvada police uniform and badge. “Officer Beasley was ambushed by someone who expressed hatred of police officers,” Strate said.

A note left behind by Troyke and recovered after the shooting contained threats against Arvada police officers, Detective Dave Snelling told the AP on Wednesday.

The Gazette, citing officials who spoke on condition of anonymity, reported the note was found in Troyke's apartment.

Authorities were still investigating the shooting that happened in Olde Town Arvada, a historic and popular downtown district with restaurants, breweries and shops about 7 miles (10 kilometers) northwest of downtown Denver.

Cody Soules, who went to high school in Colorado Springs with Hurley, recalled his friend as an idealist who was outspoken on political issues but always wished the best for everyone he met. Hurley, known to friends as Johnny, was working with a catering company before he died, Soules said.

“John was a good guy, a big-hearted person. He wanted to make a change in our society,” said Soules, a general contractor and yoga instructor who lives near Napa, California. “When we were in high school, we were troublemakers, and we got into a bit of trouble. But he had a good heart."

“I know for sure he was doing what he thought was the right thing, trying to protect those people,” Soules said.

Hurley’s sister, Erin Hurley, declined to comment when contacted by the AP but said her family planned to issue a statement at some point.

She wrote on Facebook: “Johnny acted without hesitation and possibly saved many lives while sacrificing his own.”