It's not simply the Los Angeles Clippers vs. the Phoenix Suns in the Western Conference Finals. The Clippers are fighting their own fraught playoff history.

It's a rutted road of blown leads, blowout losses, and early dismissals. The burden has lingered far longer than any of the current players have been on the roster.

Merely by reaching the conference finals for the first time, the Clippers have altered their playoff history. That they did it by overcoming 0-2 deficits to win series against Dallas and Utah is even more compelling. 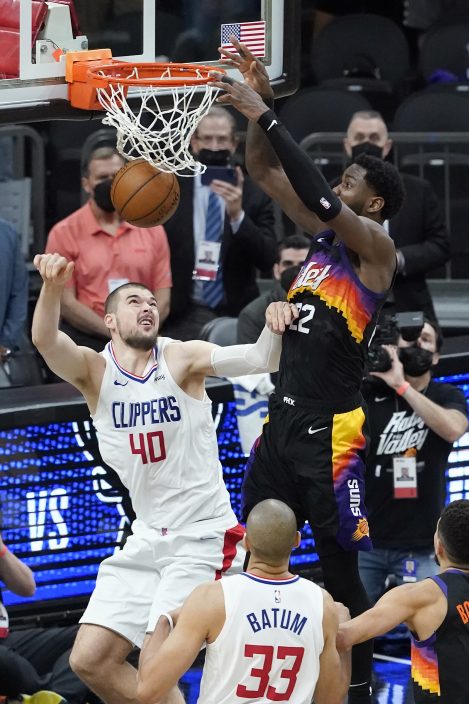 And because they play in Hollywood, why not up the drama? They're back home trailing the Suns 0-2.

Game 3 is Thursday night at Staples Center. The Clippers are a 1-point favorite, according to FanDuel Sportsbook.

Whether five-time All-Star Kawhi Leonard returns for the Clippers from a right knee injury remains to be seen. He was hurt in Game 4 against Utah. Leonard stayed back in LA to rehab while the team lost in Phoenix.

Chris Paul reportedly intends to play for the Suns after being sidelined for the first two games of the series while in the league's health and safety protocols.

“It's going to be that much tougher," Paul George said about Paul's impending return.

Paul would like nothing better than to win on his former team's home court, where he, along with Blake Griffin and DeAndre Jordan, rehabilitated the Clippers' reputation from woebegone franchise to exciting contender. Paul was MVP of the 2013 All-Star Game. His alley-oop passes to Griffin and Jordan for dunks established the team's Lob City moniker.

The trio was part of an epic collapse in 2015. The Clippers led James Harden and the Houston Rockets 3-1 in the second round, but they dropped the final three games to lose 4-3.

After six seasons, in which the Clippers never got past the second round, Paul exited. Griffin and Jordan followed him out of LA.

The playoff shortcomings didn't end there.

With George and Leonard in their first season together, the Clippers led Denver 3-1 in the bubble last year. They appeared headed toward their first appearance in the conference finals.

Instead, they blew a 15-point lead to lose Game 5, blew a 19-point lead in losing Game 6 and collapsed in the fourth quarter to lose Game 7. Coach Doc Rivers ended up getting fired.

In his first year guiding the Clippers, coach Tyronn Lue has made a series of tweaks in each round. His latest involved starting 7-foot Ivica Zubac and Patrick Beverley in Game 2, in place of the small-ball combo of Terence Mann and Nicolas Batum.

Clippers center DeMarcus Cousins was issued a postgame technical by the league on Wednesday for his “actions at the conclusion of the game" in Phoenix.

Cousins exchanged words with Suns guard Cameron Payne before pushing him. Cousins then bumped into Devin Booker and shoved him. Both incidents occurred in the chaos after Deandre Ayton's game-winning dunk — dubbed “The Valley Oop" in Phoenix — with 0.7 seconds to go, when the Suns were celebrating and the Clippers were asking officials to review the play.

Booker might be wearing a mask for Game 3 after he and Beverley bumped heads hard enough to draw blood. Booker's nose needed a few stitches and he had his right nostril plugged after the game. Beverley sported a Band-Aid on his forehead.

George has been streaky in the playoffs during his career, first with the Indiana Pacers and then the Oklahoma City Thunder. With Leonard sidelined, the spotlight and burden is squarely on him.

"Whenever he's taking a lot of jump shots and not really attacking, you can tell he's tired,” Lue said after Game 2, when George led the team with 26 points. But he missed two huge free throws with 0.9 seconds after making big plays down the stretch to give LA the lead.

George insisted, “I got stronger as the game went on."

The 31-year-old forward hasn't been this deep in the playoffs since 2013-14, when the Pacers lost to LeBron James and the Miami in the Eastern Conference finals for the second year in a row.

After being the centerpiece in Indiana, George moved to Oklahoma City and partnered with Russell Westbrook for two seasons. The Thunder lost in the first round both times.

George had surgery to repair tears in both shoulders in two years ago. He missed training camp and the first 11 games of his initial season in LA. In the playoff bubble, he averaged 20.2 points. It was his lowest output since 2012-13, when he averaged 19.2 with the Pacers.

George has scored 20 or more points in all 15 playoff games so far.

The Clippers felt the Payne. Cameron Payne, that is.

He had a career night subbing for Paul, scoring 29 points in just his second career postseason start. Payne's offense proved crucial, with Booker going 5 of 16 from the floor following his 40-point, triple-double in Game 1. Payne had nine assists, two steals and no turnovers in 37 minutes. He had just one turnover in Game 1.

“Cameron Payne has done an unbelievable job of filling in for CP,” George said.

Payne has traveled a start-and-stop path since leaving Murray State two years early for the draft.

He played his first few seasons with Oklahoma City and Chicago. He was with Cleveland on a pair of 10-day contracts and then got released by Toronto in October 2019. Payne briefly turned up playing in China before landing in the NBA's G-League early in 2020.

Last June, he signed with the Suns and had his highest scoring and rebounding averages while coming off the bench in the bubble.