The Rangers had hits on the first three pitches from Oakland reliever Yusmeiro Petit to start the seventh after the A's scored three runs in the top of the inning to erase a 2-0 deficit.

Nate Lowe homered into the Texas bullpen in right-center field for his 10th, Eli White lined a double to left-center and Holt blooped the third pitch from Petit (7-1) down the line in left to bring home White and give the Rangers a 4-3 lead. 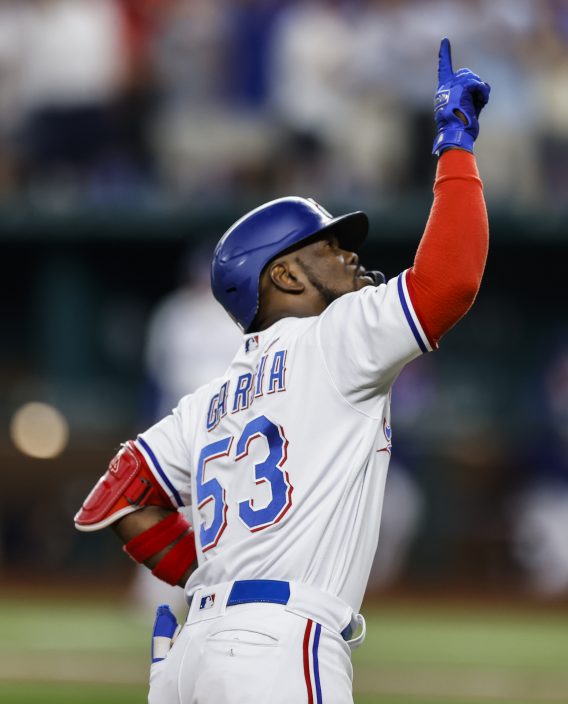 Sean Murphy opened Oakland's three-run seventh with a 443-foot home run to center field after García had put Texas ahead 2-0 with a solo shot that barely cleared the same fence in the sixth. Skye Bolt and Matt Chapman added RBI singles.

García connected on another two-out solo shot in the eighth for the 28-year-old Cuban's third multihomer game of the season. García already had the Texas record for homers by a rookie before the All-Star break.

Brett Martin (2-2) pitched a perfect eighth thanks to diving catches on consecutive plays by right fielder Joey Gallo and White in left. Joely Rodríguez finished for his first career save, allowing an infield single in the ninth. 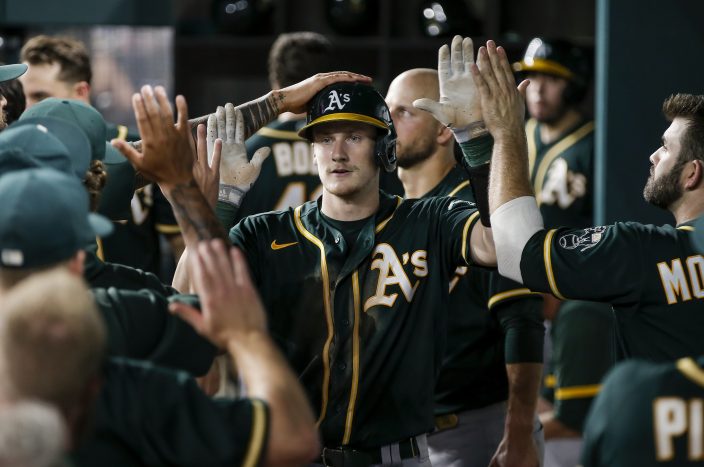 Oakland Athletics' Sean Murphy (12) is congratulated by teammates after hitting a solo home run during the seventh inning of a baseball game against the Texas Rangers, Wednesday, June 23, 2021, in Arlington, Texas. (AP PhotoBrandon Wade)

Texas starter Mike Foltynewicz, who had the second-highest ERA among AL qualifiers at 5.59 coming in, took a shutout into the seventh.

The right-hander was replaced after allowing Murphy's homer and a double to Elvis Andrus, who is playing his first series in Texas since the longtime Rangers shortstop was traded in the offseason.

After getting a popout, Texas reliever Spencer Patton allowed consecutive singles to Bolt, Tony Kemp and Chapman, who extended his hitting streak to 11 games while giving the A's a brief lead. 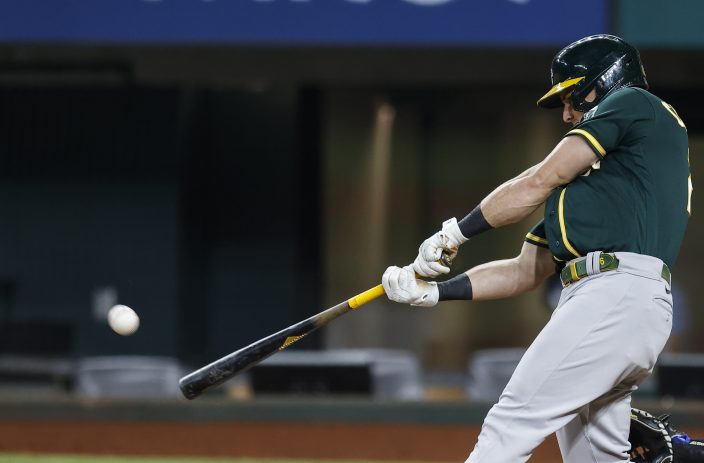 Oakland Athletics' Matt Chapman connects for an RBI single during the seventh inning of a baseball game against the Texas Rangers, Wednesday, June 23, 2021, in Arlington, Texas. (AP PhotoBrandon Wade)

García's 20 homers before the All-Star break are the most for an AL rookie since Aaron Judge hit 30 for the Yankees in 2017.

The Rangers brought up two relievers from Triple-A Round Rock in lefty Wes Benjamin and right-hander Joe Barlow, who is awaiting his major league debut. The Rangers sent right-hander Demarcus Evans to Round Rock and designated right-hander Brett de Geus for assignment. The move with the 23-year-old de Geus, a Rule 5 draft pick from the Los Angeles Dodgers in December, was made to get Barlow on the 40-man roster.

Rangers: OF David Dahl, on the injured list since May 26 with a left rib cage injury, was transferred from Round Rock to Double-A Frisco to continue his rehab assignment. Dahl made two starts at DH and one in left field

Oakland RHP Chris Bassitt (7-2, 3.40 ERA) is set to face LHP Kolby Allard (2-2, 2.93) in the finale of the four-game series Thursday. Bassitt has won seven consecutive decisions since losing his first two starts. Allard is 1-2 with a 2.70 ERA in four starts since opening the season with 10 relief appearances.