Gary Sánchez homered off Greg Holland in the ninth inning, Luke Voit hit a winning single and the New York Yankees survived another blown save by Aroldis Chapman to beat the Kansas City Royals 6-5 on Wednesday night.

The lead changed three times in the last two innings. Carlos Santana put the Royals ahead 3-2 in the eighth against Zack Britton, and Rougned Odor hit a two-run homer in the bottom half against Jake Brentz.

Chapman (5-2) forced in the tying run with a four-pitch walk to rookie Sebastian Rivero with two outs in the ninth, blowing a save for the third time in his last eight chances. 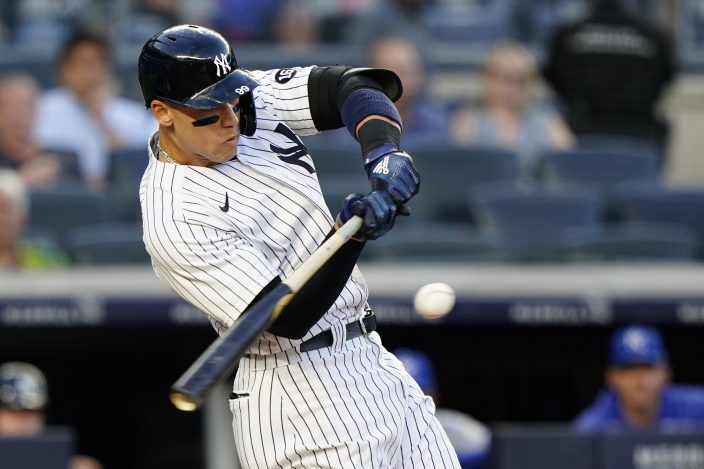 New York Yankees Aaron Judge prepares to hit a ball, which was caught in right field, during the third inning of a baseball game against the Kansas City Royals, Wednesday, June 23, 2021, at Yankee Stadium in New York. (AP PhotoKathy Willens)

Ryan O’Hearn, who put Kansas City ahead with a two-run homer in the first, followed with a go-ahead infield hit on a slow roller to third, just beating DJ LeMahieu’s throw to first.

Sánchez hit his 12th home run off Greg Holland (2-3) with one out in the bottom half, and then Giancarlo Stanton singled to right.

Pinch-runner Tyler Wade advanced on a wild pitch and Voit, in his second game back from the injured list, reached down for a slider and sent the ball high off the left-field wall, missing a home run by about a foot. Wade scored standing up. 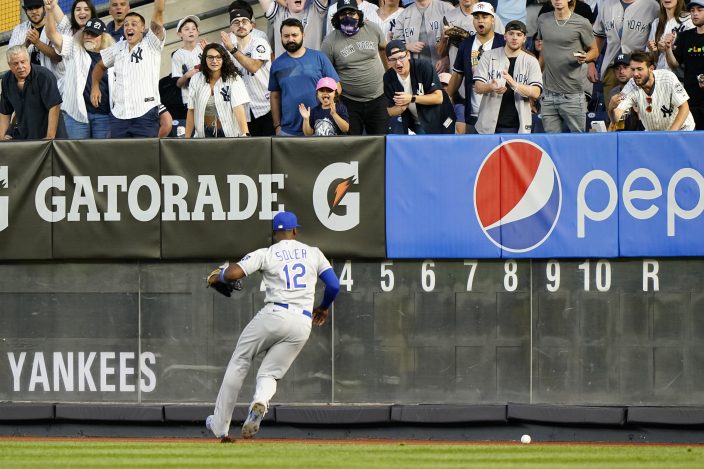 It was Voit's first game-ending hit in the majors. New York has six walk-off wins this season.

Rivero, a rookie who is 0 for 7 in his big league career, entered in the fourth inning after catcher Salvador Pérez took a foul tip off his mark. Chapman’s final pitch to him was more than a foot outside, and the closer screamed in anger at himself, then slammed his glove after Jarrod Dyson grounded out. 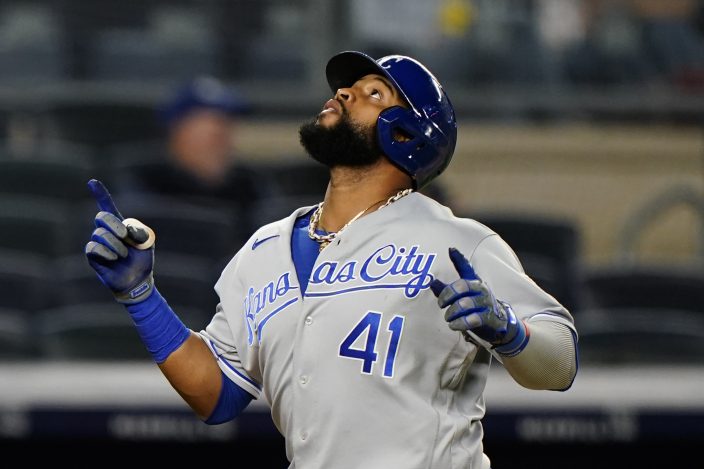 O’Hearn homered for the second straight game since his return from Triple-A, putting the Royals ahead with a 339-foot drive into the right field short porch off Michael King.

Clint Frazier, who had been 6 for 38 with runners in scoring position this season (.158), tied the score in the fourth against Hernández with an opposite-field double off the base of the manual scoreboard in the right-field wall, which due to the coronavirus has not been used since 2019.

Duffy needed 42 pitches to get through two hitless innings, striking out four in his first start since returning from a left flexor strain that had sidelined him since May 12. Duffy made his 200th big league start 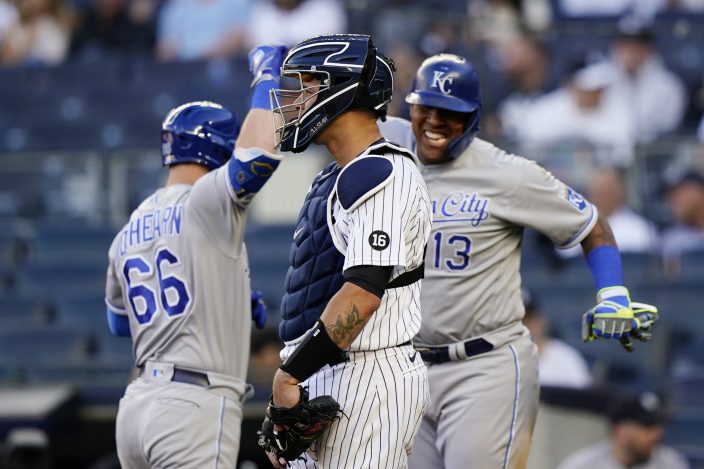 Chad Green made his earliest appearance this season, entering with the bases loaded in the fifth and retiring O’Hearn on a flyout.

Britton, making his fourth appearance since returning from left elbow surgery, had gone 33 innings without a home run since Minnesota’s Eddie Rosario went deep in Game 3 of the 2019 AL Division Series.

Fans booed umpires when they checked King for banned foreign substances after the second inning.

Pérez took a foul tip off the mask on Duffy’s fifth pitch of the game, with LeMahieu leading off the first, and left in the middle of the third. The 31-year-old Pérez, a six-time All-Star, has played in all 72 games this season. Royals manager Mike Matheny said Pérez had a headache but passed concussion tests.

Yankees: 3B Gio Urshela did not play, a day after he was hit in the left shin by Jake Brentz's pitch. The shin was swollen and sore.

RHP Jameson Taillon (1-4, 5.59) is 0-2 in his last eight starts for the Yankees heading into Thursday’s series finale. Kansas City has lost the last three starts of RHP Brad Keller (6-7, 6.34) after winning the prior five.