Trent Grisham drew a go-ahead, bases-loaded walk with one out in the eighth and the San Diego Padres, who hit three solo homers off Trevor Bauer, beat the Los Angeles Dodgers 5-3 Wednesday night for their first three-game sweep of the NL West rivals in eight seasons.

The game ended in front of a sellout crowd of 43,961 when pinch-hitter Albert Pujols lined out to third baseman Manny Machado, who doubled Will Smith off second. That earned Mark Melancon his 23rd save, most in the majors.

San Diego is 7-3 this season against the Dodgers, including winning four straight, and has won two of the three series against the eight-time defending division champions. The Dodgers swept the Padres in the NL Division Series in October en route to winning the World Series. 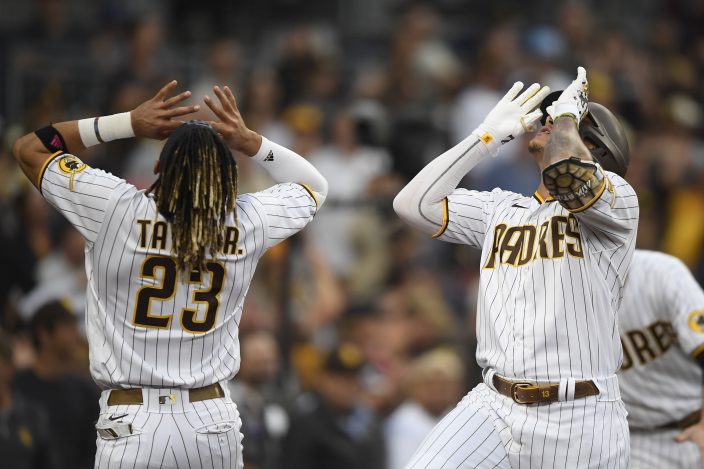 San Diego has won seven straight games overall, including a four-game sweep of the Cincinnati Reds, after losing 13 of their previous 17 games.

With the score tied at 3, Jake Cronenworth, who homered in the first, started the winning rally with a leadoff double off Blake Treinen (1-3) that went off the glove of leaping right fielder Matt Beaty. Manny Machado singled and Victor Gonzalez came on and allowed Eric Hosmer’s sacrifice bunt. Wil Myers was intentionally walked to load the bases before Gonzalez walked Grisham to bring in Cronenworth. Victor Caratini added a sacrifice fly. 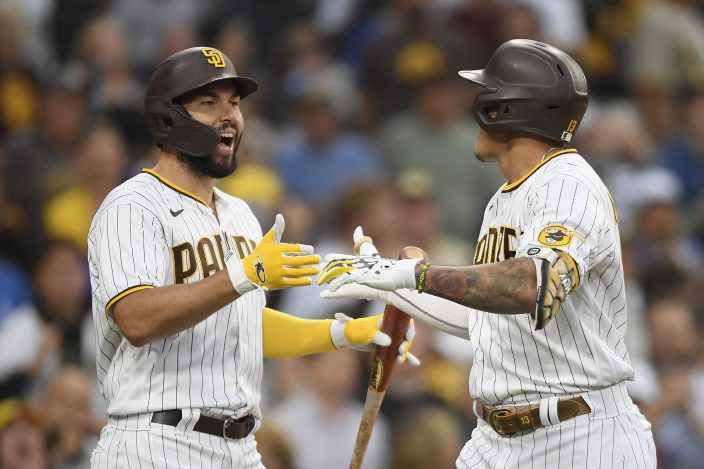 Cronenworth and Machado connected back-to-back with two outs in the first against Bauer, who won the 2020 NL Cy Young Award while with Cincinnati. Caratini gave the Padres a 3-2 lead with a leadoff homer in the seventh.

The Dodgers tied it in the eighth when Max Muncy doubled and scored on Justin Turner's opposite-field single to right. 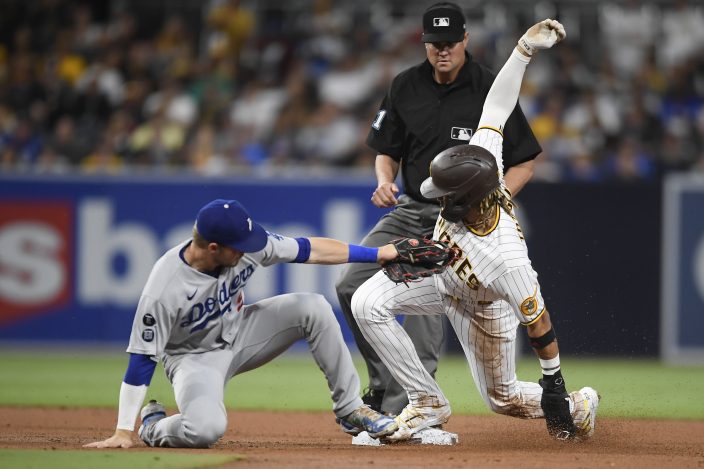 After allowing the consecutive homers in the first, Bauer settled down and retired nine of the next 10 batters before getting into and out of a jam in the fourth. After Bauer struck out Machado and Eric Hosmer, he walked Myers and allowed a ground-rule double to Grisham. Caratini was intentionally walked to get to starter Joe Musgrove, who struck out looking.

Musgrove retired nine of the first 10 Dodgers batters before Los Angeles broke through in the fourth. Muncy hit a leadoff double, Cody Bellinger, activated earlier in the day, walked with one out and Smith hit an RBI single. First baseman Hosmer went for a reverse double play on Beaty's grounder and forced Smith at second but shortstop Fernando Tatis Jr.'s return throw skipped past Musgrove for an error and Bellinger scored.

Musgrove, who threw the Padres' first no-hitter on April 9, allowed two runs, one earned, on two hits in six innings. He struck out five and walked two. 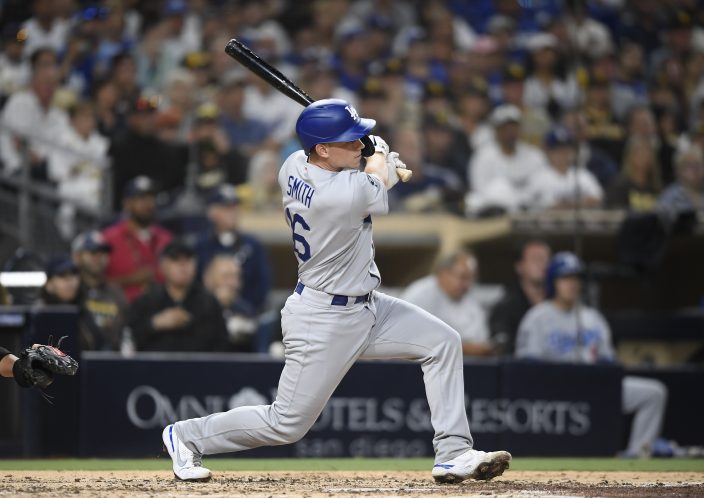 Los Angeles Dodgers' Will Smith (16) hits an RBI single during the fourth inning of a baseball game against the San Diego Padres Wednesday, June 23, 2021, in San Diego. (AP PhotoDenis Poroy)

Dodgers: Activated Bellinger from the 10-day injured list after he missed seven games with tightness in his left hamstring. To make room, INF Andy Burns was optioned to Triple-A Oklahoma City. 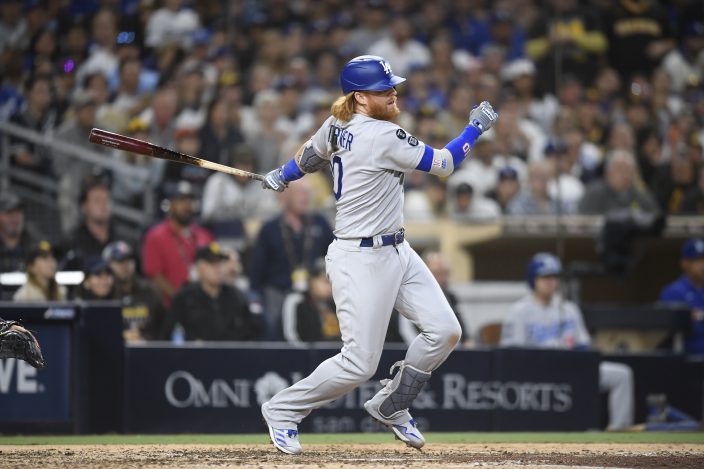 Dodgers: RHP Walker Buehler (7-0, 2.48 ERA) is scheduled to start Thursday night in the opener of a home four-game series against the Chicago Cubs, who will counter with RHP Zach Davies (4-4, 4.66.

Padres: RHP Chris Paddack (4-5, 4.10) is scheduled to start Friday night in the opener of a three-game home series against the last-place Arizona Diamondbacks, who will counter with RHP Corbin Martin (0-2, 8.62). 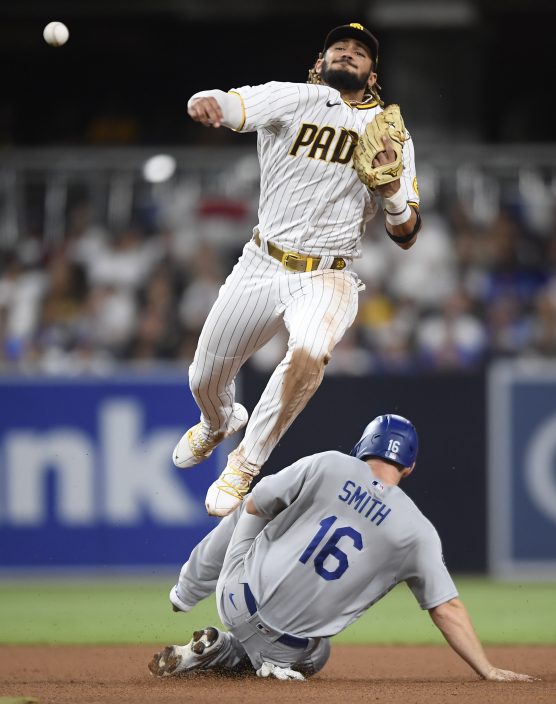 San Diego Padres shortstop Fernando Tatis Jr. (23) throws over Will Smith (16) as he tries to turn a double play during the fourth inning of a baseball game Wednesday, June 23, 2021, in San Diego. Tatis was unable to turn the double and was charged with a throwing error. (AP PhotoDenis Poroy)