With a few minutes remaining in Sweden’s chaotic European Championship match against Poland, Janne Andersson decided to have some fun in the technical area.

Sweden’s usually straight-laced coach saw a member of Poland’s backroom staff, Jakub Kwiatkowski, scrambling to gather the loose ball that had been kicked out of play and got to it first.

As Kwiatkowski confronted him, Andersson played the ball between his counterpart’s legs and smiled at him. 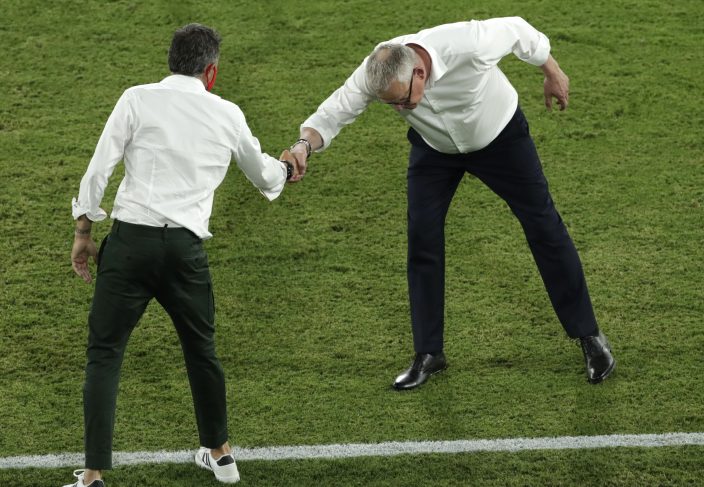 “I tunneled him,” Andersson said, using a classic Swedish term for the soccer move. “He got annoyed, but I was happy with the tunnel.

“I didn’t do it to mock him. He just came and I happened to put it between his legs.”

As for flamboyance on the field, well, that’s been in short supply with Sweden at Euro 2020. 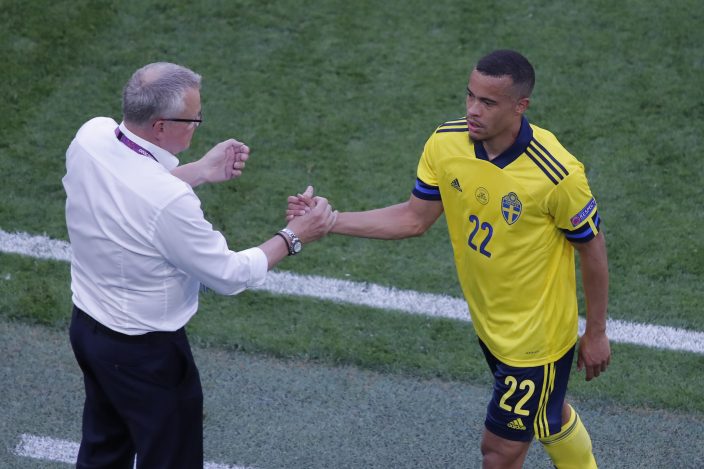 And that suits Andersson just fine.

Sweden, one of the continent’s most pragmatic — some might say boring — teams, is in the knockout stage of a major tournament once again. And like at the 2018 World Cup, the team has done so by topping its group.

A 0-0 draw against a Spain team that had 85% ball possession was followed by a sleepy 1-0 victory over Slovakia. OK, the 3-2 victory over Poland on Wednesday was actually lots of fun, but that was because the Poles were forced to go on all-out attack in search of a win to qualify.

Sweden was ruthless in picking them off, scoring three times from its four shots on target, but the team didn’t look as comfortable in such an end-to-end game.

Still, Andersson’s team is now unbeaten in eight matches in 2021, winning seven of them and keeping six clean sheets along the way.

“People continue to underestimate us,” said Sweden midfielder Viktor Claesson, who scored the stoppage-time winner against Poland. “We won our group at the World Cup and now at the European Championship.

“No one believed we could.”

It might be time to take Sweden seriously, and Ukraine — its opponent in the round of 16 in Glasgow on Tuesday — can only be expecting a tough game.

That is Andersson’s style. Difficult, robust, well-drilled. After all, he is a disciple of the 4-4-2 system introduced and ingrained in Swedish soccer by English coaches Bob Houghton and Roy Hodgson in the 1970s and 1980s.

Two hard-working banks of four, plus a couple of usually strapping strikers who run the channels, harass defenders and relish the aerial battle.

Andersson’s current Sweden team — which is without Zlatan Ibrahimovic at Euro 2020 after his international comeback was put on hold because of injury — has a couple of creative and exciting attacking wildcards in striker Alexander Isak and winger Dejan Kulusevski.

But the basics of a typical Swedish national team are all there, especially in right midfielder Sebastian Larsson, still reliable as ever at 36, and the central-midfield pairing of Kristoffer Olssson and Albin Ekdal, for whom the term solid could have been invented.

Andersson knows there are several opponents with better quality in this tournament but few, if any, have the teamwork, discipline and organization of Sweden.

“No matter what I do, someone will always have an opinion about me,” he said. “I decided a long time ago I wasn’t going to care about other people’s opinions. We have to focus on what we are doing and on what we want to do.”

Sweden will start as the marginal favorite against Ukraine and a win would see the team match its achievement of 2018, when it reached the quarterfinals before losing to England. And, as fate would have it, England could yet be a quarterfinal opponent again if it beats Germany in the last 16.

For now, it’s all about rest and recovery after the win over Poland in uncomfortably hot conditions in St. Petersburg.

There’ll be no midsummer celebrations with their families for Sweden’s players this year — the country’s national day is on June 26, three days before the Ukraine game — but that’s a sacrifice they are happy to make.

“To me, celebrating midsummer is about having herring and potato salads,” Andersson said. “(This year) we will have a small beer on the way home.”