After ending a nearly six-year wait for an international goal, Karim Benzema could score again as soon as Monday.

France will face Switzerland in the round of 16 at the European Championship and the striker may relish that contest for a couple of reasons.

Benzema might play more freely after scoring both goals in the 2-2 draw against Portugal on Wednesday, taking a huge weight off his back. They were his first goals for Les Bleus since October 2015. 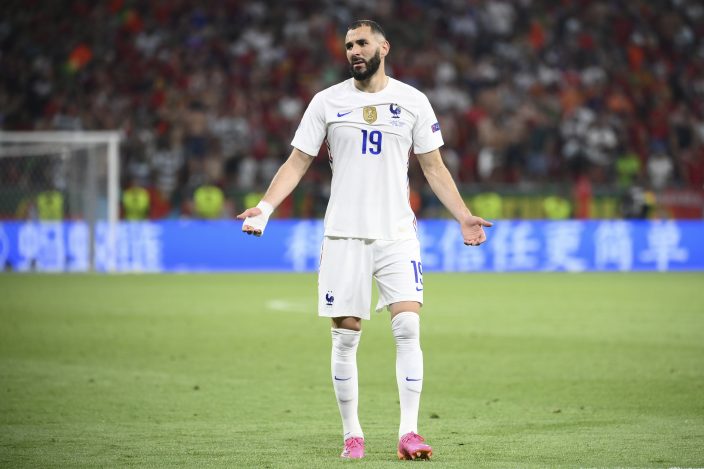 “Everyone was waiting for this,” the Real Madrid forward said. “The pressure is different than when you're playing for your club.”

He might also feel confident because it was against the Swiss that he produced his previous best performance for France in a 5-2 win at the 2014 World Cup in Brazil.

He scored with an opportunist finish, set up a goal for Moussa Sissoko, and had a superb curling strike disallowed because it crossed the line just after referee Bjorn Kuipers blew the final whistle.

Brazilian fans in Salvador warmed to his flamboyant style and he was the No. 1 striker for coach Didier Deschamps. Antoine Griezmann was emerging on the international scene and Olivier Giroud was behind Benzema in the hierarchy.

The following year, Benzema's international career was in freefall after a fallout with Deschamps because of the player’s involvement in a “sextape” scandal.

It cost Benzema a place at Euro 2016, where France lost to Portugal in the final. Then, he watched from his television as France won the 2018 World Cup.

A change of heart from Deschamps saw Benzema surprisingly recalled just before Euro 2020 and, after a frustrating performance last Saturday against Hungary, he was at his classy best against Portugal.

Benzema’s tally of 29 goals in 86 international appearances seems a bit low for a player of such technical ability. However, there is far more to his game than goals. He is an unselfish forward who creates space for others, a mixture of finisher, playmaker and provider.

Former teammate Cristiano Ronaldo is Real Madrid’s record all-time leading scorer with 450 goals and credited Benzema's role in achieving that during the nine years they played together. Their bond was evident when they walked off the field on Wednesday with their arms around each other.

Benzema has come into his own at Madrid since Ronaldo joined Juventus in 2018.

He has moved up to fifth overall on Madrid’s list of scorers with 279 goals and is tied for fourth highest in the Champions League with 71.

He did that against Portugal, stepping up to score a penalty in first-half injury time when Griezmann is the more regular penalty taker.

There was pressure on Benzema, too, because France was trailing 1-0 and his previous penalty against Wales was saved three weeks ago.

He sent the ball into the bottom left corner.

“You," Benzema said, “have to be determined.”