Brazil’s President Jair Bolsonaro has asked supermarkets to lower prices of staple foods and his economy minister suggested homeless people could live off restaurant leftovers. It marked a sharp contrast from days earlier, when both boasted their policies had restored the economy to pre-pandemic levels.

The desperation for stopgap solutions reflects recent recognition that Brazil’s economic rebound was largely driven by the agriculture sector and investments, while the poorest citizens saw their footing slip further.

In the first quarter of 2021, Brazil’s unemployment — officially 14.7% — and economic inequality reached their highest levels in at least nine years. The cost of living has surged — from food to rent and cooking gas — and tent cities and shantytowns have emerged. A record drought threatens to send electricity prices soaring. 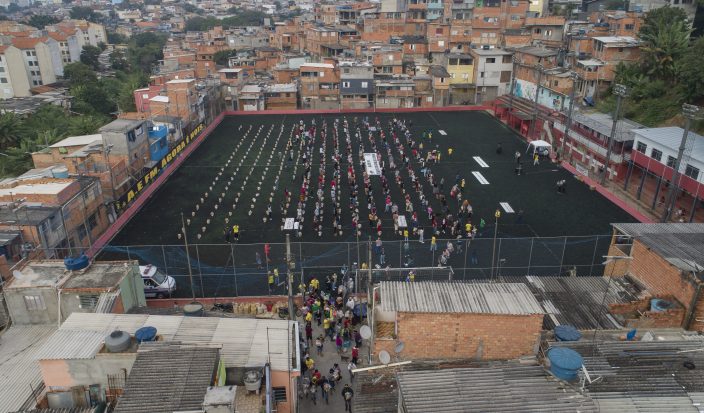 FILE - In this April 26, 2021 file photo, residents wait on a soccer field for food donated by the local NGO "G10 Favelas," amid the COVID-19 pandemic in the Capao Redondo area of Sao Paulo, Brazil. In the first quarter of 2021, Brazil saw its highest unemployment and economic inequality in at least nine years, with the cost of living surging and tent cities and shantytowns emerging. (AP PhotoAndre Penner, File)

That has left governments, companies and nonprofits scrambling to help the poor with welfare, gas subsidies, food donations, cellphone chips and solar panels — anything to get through 2021 as the pandemic continues raging. It’s a display of Brazilian ‘'jeitinho’' — a knack for improvising solutions in the face of adversity — but also shows how many are barely hanging on, with catastrophe just a few unpaid bills off.

“The poor are far and away the biggest losers and paying the price of this crisis,” said Marcelo Neri, director of the social policy center at the Getulio Vargas Foundation, a university. “Brazilians improvise, but sometimes we’re victims of our own creativity with collective problems. ... The pandemic is our ultimate test, and we’re losing the war.”

Among Brazil’s 15 million unemployed is Sergio Alves, 52, a resident of the working-class Babilonia neighborhood in Rio de Janeiro overlooking the ocean. He has gotten by on the government’s generous pandemic welfare program; it sustained the poor and stimulated consumption, preventing a deeper recession last year. Brazil currently has 27.5 million poor people, defined as households living on less than one minimum wage ($220). If the federal government ceased its current aid program, that number would go automatically to 34.3 million, according to Neri. 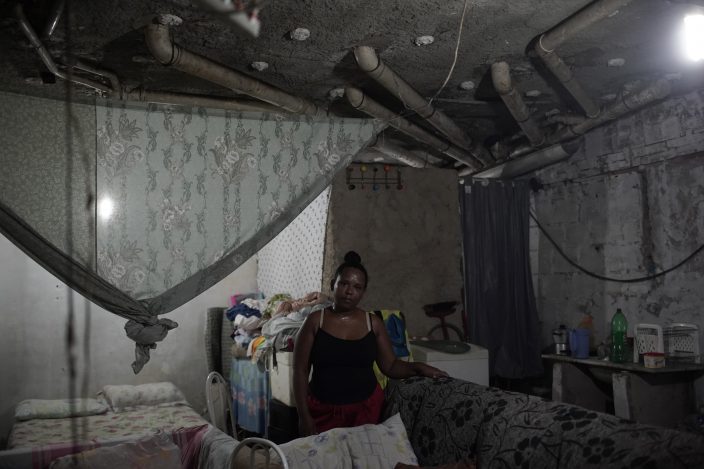 FILE - In this Jan. 13, 2021 file photo, Ana Paula de Santos poses for a photo inside a room that she occupies with her husband in a building that used to house a factory, amid the new coronavirus pandemic, in Rio de Janeiro, Brazil. De Santos, who worked as a maid, has been unable to work because of COVID-19 and says that she can't afford the cost of living after the Brazilian government cut off financial aid to poor families affected by the pandemic. (AP PhotoSilvia Izquierdo, File)

That lifeline was first reduced and then suspended at the end of 2020. It was reinstated in April — but at a lower level. Now, Alves spends more on electricity alone than he receives from the program.

“The cost keeps going up for power, for gas,” he said at his home in the favela overlooking the ocean. “And beyond paying bills, I have to survive.”

Bolsonaro announced on June 15 that his administration intends to extend the welfare program for poor and informal workers by at least two months, and boost the value of conditional cash transfers to families by 50%. 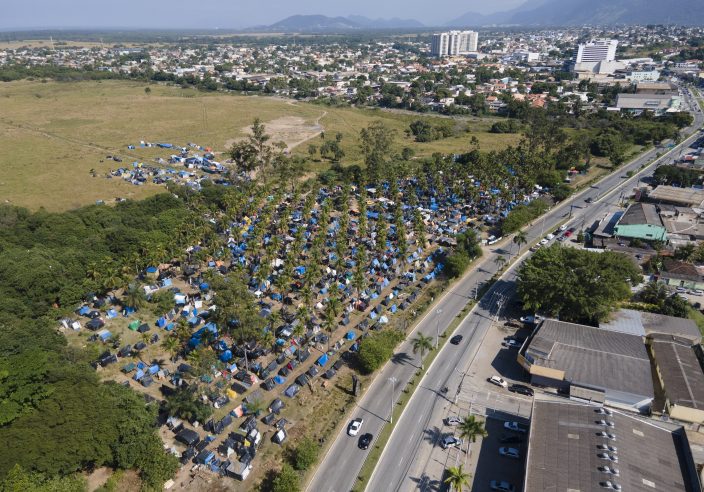 FILE - In this May 26, 2021 file photo, tents and shacks cover land designated for a Petrobras refinery, called the "First of May Refugee Camp," which refers to the date the squatters camp sprung up amid the new coronavirus pandemic, in Itaguai, Rio de Janeiro state, Brazil. In the first quarter of 2021, Brazil saw its highest unemployment and economic inequality in at least nine years, with the cost of living surging and tent cities and shantytowns emerging. (AP PhotoMario Lobao, File)

“We know about the population’s troubles,” Bolsonaro said. “The poorest, the most humble, those living in informality, selling water at traffic lights, crackers on the beach or skewered meat in the square, were knocked down. Almost 40 million people are in that situation.”

Many Brazilians already can't make ends meet. Just 80 kilometers (50 miles) from Alves’ hillside, a new tent city outside Rio is home to more than 3,000 people. Among them is Roseli de Freitas, who cooks with firewood instead of gas. She couldn’t keep paying for rent, food and power.

“All those things brought me here,” said de Freitas, sitting before a log fire beside her makeshift home of scrap wood and aluminum. She came with her six siblings and their children. 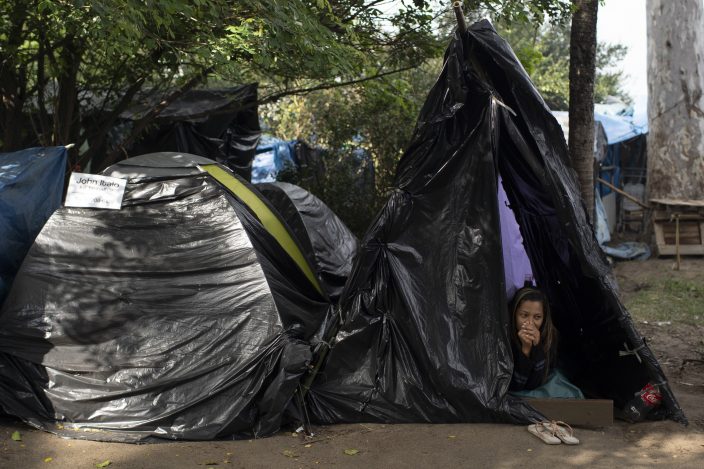 FILE - In this May 26, 2021 file photo, a woman rests in a tent on land designated for a Petrobras refinery, called the "First of May Refugee Camp," which refers to the date the squatters camp sprung up during the new coronavirus pandemic in Itaguai, Rio de Janeiro state, Brazil. In the first quarter of 2021, Brazil saw its highest unemployment and economic inequality in at least nine years, with the cost of living surging and tent cities and shantytowns emerging. (AP PhotoSilvia Izquierdo, File)

Some cities have created programs of their own to complement the federal effort. Salvador, the capital of Bahia state in Brazil’s impoverished northeast, has been giving 270 reais ($54) to 20,000 people each month.

In Sao Paulo state, home to one-fifth of Brazilians, the local government announced on June 17 that it would provide 100,000 needy families with monthly vouchers for cooking gas.

Nestlé donated 500 tons of food and beverages, and brewer Ambev gave $50 to 20,000 street vendors who usually work during Carnival, suspended due to the pandemic. Mining giant Vale announced it would donate a million food kits to 220,000 families in five states by year-end. Rio de Paz, a nonprofit, has delivered 4,500 food kits and tens of thousands of hot meals in favelas. 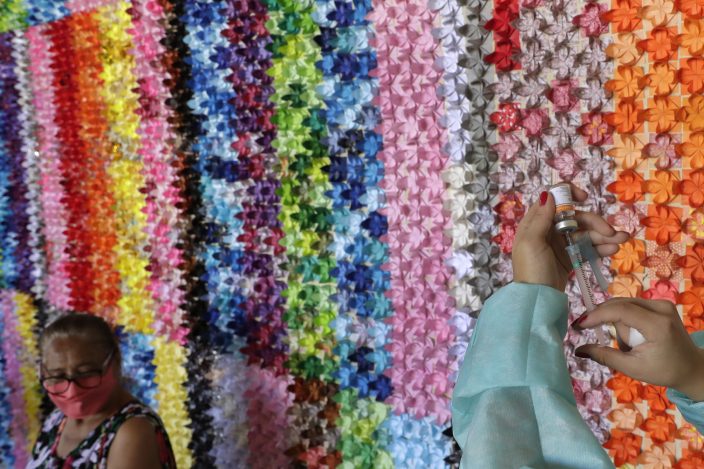 FILE - In this March 29, 2021 file photo, a health worker prepares a shot of the Sinovac vaccine for COVID-19 in front of a panel of origami lotus flowers, placed in honor of victims of the pandemic, at a health center in Brasilia, Brazil. According to the organizers, the flower panel is also a gesture of thanks to health professionals and of hope to those who are being vaccinated. (AP PhotoEraldo Peres, File)

The federal government in March also launched a program to distribute hundreds of thousands of food kits. But Economy Minister Paulo Guedes faced accusations of insensitivity after his off-the-cuff proposal last week o feed the homeless with leftovers.

“Politicians should be discussing proposals to get out of this sad moment in world history,” he said afterward on Twitter. “This is the time for people to unite and find sustainable, productive and humane solutions.”

Meantime, COVID-19 has ceded little ground. Less than 12% of Brazilians are fully vaccinated against the disease, more than 2,000 are dying daily and experts warn Brazil may be entering its third wave. That leaves many students still homebound, raising concern that those in poor communities will fall even further behind wealthier cohorts. 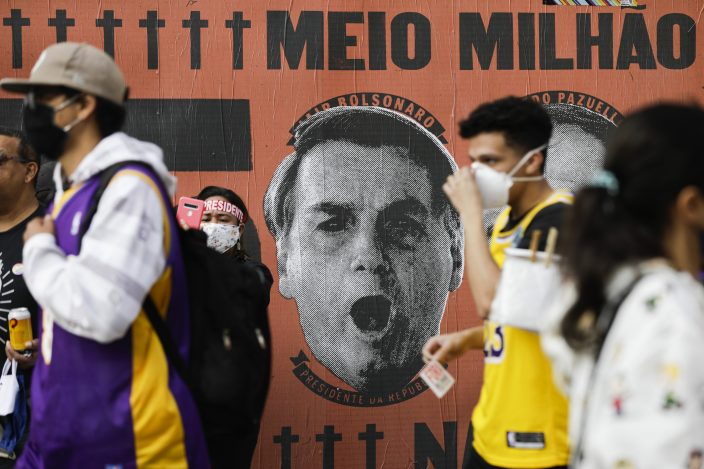 FILE - In this June 19, 2021 file photo, demonstrators walk past a mural depicting the face of Brazilian President Jair Bolsonaro during a demonstration against Bolsonaro's handling of the coronavirus pandemic and economic policies protesters say harm the interests of the poor and working-class on Paulista Avenue in Sao Paulo, Brazil. In the first quarter of 2021, Brazil saw its highest unemployment and economic inequality in at least nine years, with the cost of living surging and tent cities and shantytowns emerging. (AP PhotoMarcelo Chello, File)

Last September, the nonprofit Central Union of Favelas set out to distribute 500,000 cellphone chips in favelas throughout the country so children can have internet access to online classes. In Paraisopolis, one of Sao Paulo’s biggest favelas, another nonprofit, G10 of Favelas, hired so-called “street presidents” to tutor unschooled children whose parents work.

Getting hired to tutor was a godsend for Graziele Santos, a 29-year-old single mother who lost her waitressing job early in the pandemic. Even with her new salary, bills for rent, gas and power pile up, and she told The Associated Press that she sometimes falls asleep thinking of her daughter’s words: “Mom, I want to eat meat.”

“There are weeks she only eats eggs,” Santos said. “I can afford less and less.”

FILE - In this June 20, 2021 file photo, an activist, right, argues with a person who said the deaths related to COVID-19 are fake news, during a protest against Brazilian President Jair Bolsonaro and his handling of the COVID-19 pandemic, in Rio de Janeiro, Brazil. Less than 12% of Brazilians are fully vaccinated against the disease, more than 2,000 people are dying daily and experts warn Brazil may be entering its third wave. (AP PhotoSilvia Izquierdo, File)

She will feel more pinch in her pocketbook soon, with rising electricity bills. Brazil is facing its worst drought in 90 years, which is depleting hydroelectric reservoirs and necessitating costlier thermoelectric generation. Starting next month, rates will jump at least 15%, according to André Braz, coordinator of the Getulio Vargas Foundation’s consumer inflation index.

Back at the seaside favela in Rio, Alves has a view of residents whose power bills are headed in the opposite direction — dropping some 40% thanks to nonprofit Revolusolar, which installed solar panels atop 36 homes in Babilonia. Alves and other neighbors are clamoring to be included.

“All of us need any savings at this moment,” he said. 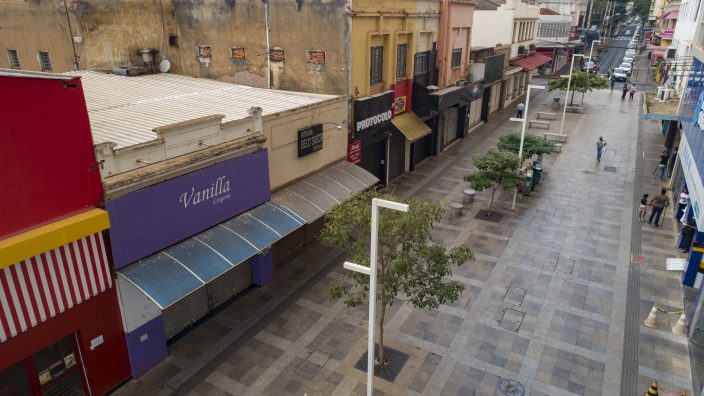 FILE - In this May 28, 2021 file photo, stores are closed during a lockdown to stop the spread of the new coronavirus in downtown Ribeirao Preto, Sao Paulo state, Brazil. The city imposed strict shutdown measures this week to stop the spread of COVID-19, halting public transportation for the first time and closing supermarkets. (AP PhotoAndre Penner, File)

Revolusolar’ hopes to cover all of Babilonia, but needs to raise more funds before installing the next panels. 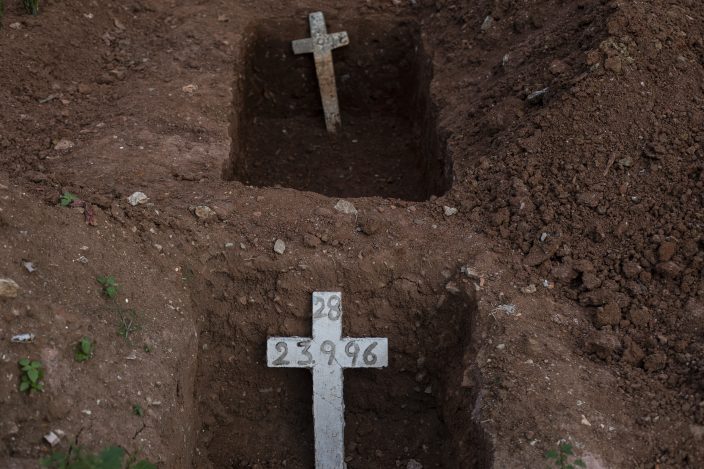 FILE - In this June 18, 2021 file photo, crosses with numbers stand inside freshly dug graves at the Inhauma cemetery where people who have died from COVID-19 are buried in Rio de Janeiro, Brazil. As of June 2021, less than 12% of Brazilians are fully vaccinated against the disease, more than 2,000 people are dying daily and experts warn Brazil may be entering its third wave. (AP PhotoBruna Prado, File) 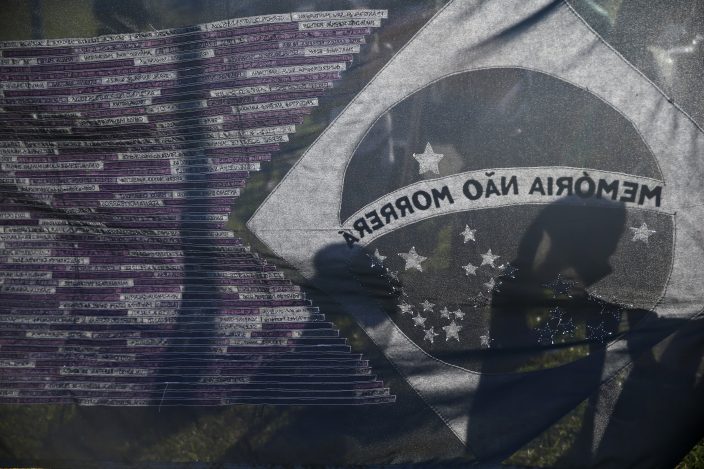 FILE - In this June 23, 2021 file photo, the shadows of protesters are cast on a Brazilian flag covered with the names of COVID-19 victims outside Congress during a protest against the high death toll from the pandemic in Brasilia, Brazil. Coronavirus-related deaths in Brazil have surpassed 500,000 while Senate hearings on President Jair Bolsonaro's response to the virus continue. (AP PhotoEraldo Peres)