How much do you know about Wimbledon, the grass-court Grand Slam tennis tournament that begins Monday? Give this AP quiz a try: 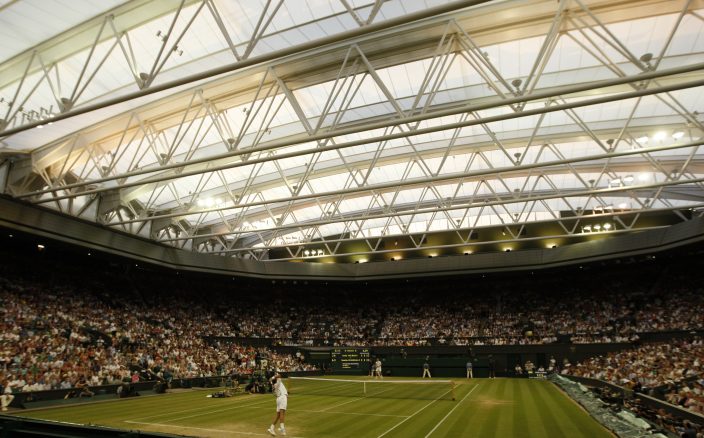 FILE - Stanislas Wawrinka, of Switzerland, foreground, serves to Andy Murray, of Britain, during their fourth round singles match at Wimbledon, in this Monday, June 29, 2009, file photo. How much do you know about Wimbledon? (AP PhotoAlastair Grant, File)

2nd Round: Who was the last player other than Novak Djokovic, Roger Federer, Rafael Nadal or Andy Murray — collectively referred to by some as the Big Four of men's tennis — to win what the All England Club calls The Gentlemen’s Singles Trophy?

3rd Round: Starting with the 2000 tournament, how many of the past 40 women's singles finalist slots at Wimbledon — 20 winners, 20 runners-up — have been filled by Serena or Venus Williams?

4th Round: Roger Federer holds the record for most Grand Slam final appearances by a man with 31, and is followed closely on the all-time list by Novak Djokovic with 29 and Rafael Nadal with 28. Who ranks fourth on that list?

Quarterfinals: When Novak Djokovic came back from two sets down to beat Stefanos Tsitsipas in the French Open final, he became the first man in more than a half-century to win a Grand Slam title after twice winning matches during the tournament despite dropping the initial two sets. Who was the previous man to pull off two such comebacks on the way to a major championship?

Semifinals: Who was the most recent female qualifier to reach the semifinals at Wimbledon? (Bonus: In what year and to whom did she lose?)

Final: Since the start of 2015, how many grass-court matches has Serena Williams lost?

1st Round. d. The oldest Grand Slam tennis tournament, first held in 1877, had never been canceled for any reason other than a world war until last year's pandemic.

2nd Round. b. Hewitt beat David Nalbandian in the 2002 Wimbledon men's final for his second Grand Slam title. Since then, the 17 men's singles trophies have been divided this way: eight to Federer, five to Djokovic, two to Nadal and two to Murray.

4th Round. b. Lendl reached 19 Grand Slam finals, winning eight championships and finishing as the runner-up a record-tying 11 times (Federer also has lost 11 major finals). Sampras is next on the list with 18.