The British economy slowed down during the third quarter of the year as widespread supply chain problems hobbled the recovery from the coronavirus pandemic, official figures showed Thursday.

The Office for National Statistics said the economy grew by 1.3% between July and September from the previous three-month period, with the health sector and housing market particularly buoyant. The increase was slightly below market expectations and lower than the second quarter's 5.5% boost.

The third-quarter result means the British economy remains 2.1% below where it was before the pandemic struck in March 2020. 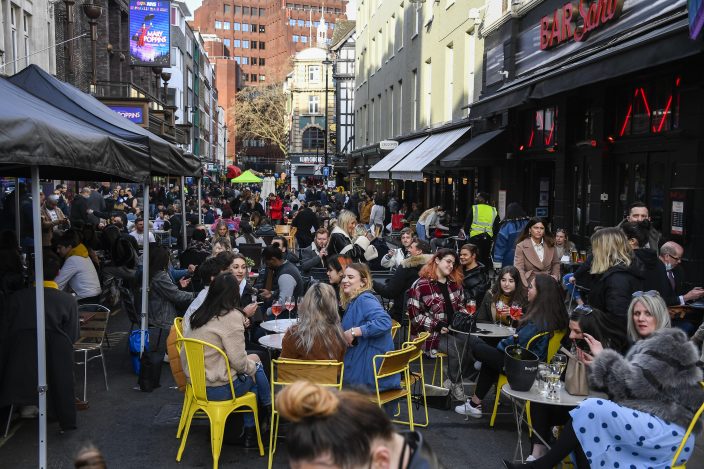 FILE - In this file photo dated Monday, April 12, 2021, people sit, drinking and eating at outside cafes and pubs in Soho, central London, as coronavirus lockdown restrictions are eased. The British economy slowed down during the third quarter of the year as widespread supply chain problems hobbled the recovery from the coronavirus pandemic, official figures showed Thursday. The Office for National Statistics said the economy grew by 1.3% between July and September from the previous three-month period, with the health sector and the housing market being particularly buoyant. (AP PhotoAlberto Pezzali, FILE)

Though the British economy is widely forecast to grow faster than other leading economies this year, that's largely because it experienced the biggest downturn in 2021, when it shrunk by nearly 10%, the country's deepest recession in around 300 years.

As a result, the British economy remains the laggard among the Group of Seven economies. The United States is the only G-7 economy to be bigger than it was at the outset of the pandemic, according to the statistics agency. Official figures elsewhere show that France is nearly back at its pre-pandemic level, while Germany, Europe's largest economy, is around 1% smaller.

Last week, the Bank of England said the economy would not gain back the output lost during the pandemic until the first part of next year after previously predicting a recovery by year’s end.

Over the summer, Britain witnessed an array of supply chain problems tied to disruptions caused by the pandemic and Britain’s departure from the European Union. That was evident in the recent long lines seen at gas stations amid a shortage of truck drivers.

The statistics agency said car sales, in particular, have been hit by a shortage of computer chips, while construction projects were delayed amid difficulties in getting materials.

Debapratim De, senior economist at Deloitte, said "weakness in consumer-facing services, despite minimal social distancing restrictions over the summer, and a contraction in industrial production, highlight that parts of the economy continued to be blighted by the paucity of labor and raw materials.”

Rate-setters at the Bank of England appear to want to raise interest rates soon to keep a lid on rising consumer prices tied to supply chain problems, high energy prices and other factors tied to the global recovery from the pandemic. The annual rate of inflation is running at 3.1%, higher than the bank's target of 2%, and is expected to edge higher toward the 5% mark in coming months.

The majority of policymakers at the central bank said last week that they wanted to see how the job market was holding up after the end of a government program that subsidized salaries during the pandemic before increasing the bank's benchmark rate from a record low 0.1%.

For much of the time the program was in place, the government paid 80% of the salaries of employees unable to work because of lockdown measures. At its peak, it helped support over 11 million people, but with many workers returning to their jobs after pandemic restrictions lifted, that fell to a little more than 1 million at the end of the program in September.

Within hours of Russian authoritie ...

Bank of England warns of rising inflation, but rates hold