The German government’s tax income over the next few years is expected to be considerably higher than previously forecast as Europe's biggest economy recovers from the coronavirus pandemic.

The figures released Thursday could help the incoming government as negotiators tackle the thorny issue of how to finance the plans of a prospective three-party coalition led by center-left Social Democrat Olaf Scholz. He is the finance minister and vice chancellor in outgoing Chancellor Angela Merkel's government. 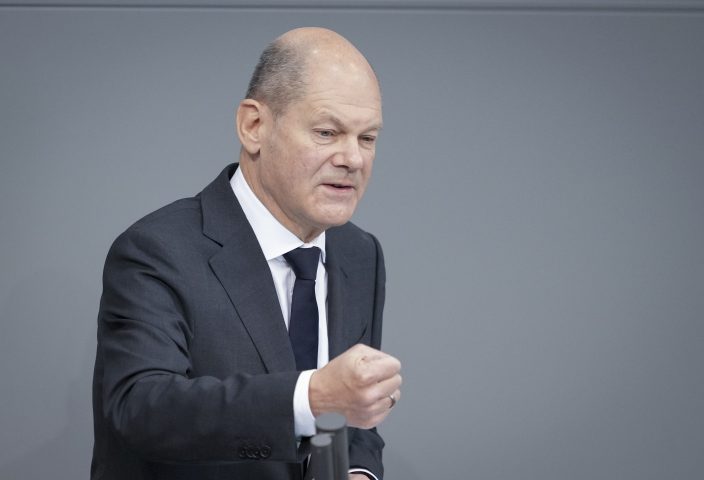 German Vice Chancellor and Finance Minister Olaf Scholz delivers his speech during a debate about the measures to battle the coronavirus and COVID-19 at the parliament Bundestag in Berlin, Germany, Thursday, Nov. 11, 2021. Germany’s national disease control center reported a record-high number of more than 50,000 daily coronavirus cases on Thursday as the country's parliament was set to discuss legislation that would provide a new legal framework for coronavirus measures. (Kay Nietfelddpa via AP)

For this year, the experts are forecasting total tax revenue of 812 billion euros ($937 billion), compared with the 773.5 billion euros ($893 billion) they predicted six months ago. Scholz said the rise has little to do with increased inflation.

“With this, the next government can work sensibly — with successful financial policy, we have enabled room for maneuver for the coming government,” Scholz said, though he cautioned that “there are still significant financial burdens from the pandemic.”

Scholz is trying to form a government with the environmentalist Greens and pro-business Free Democrats, two parties that until now were in opposition, after his party finished first in Germany's September election. If coalition talks are successful, the alliance would send Merkel's center-right Union bloc into opposition.

One major issue is how to finance plans to combat climate change and modernize Germany's infrastructure. At the Free Democrats' insistence, the prospective partners plan to do without tax increases or looser rules on running up debt.

The plan is for a coalition agreement to be sealed by the end of November and for lawmakers to elect Scholz as chancellor in the week beginning Dec. 6. Scholz said he's still confident of keeping to the timetable and doesn't see any “insurmountably big problem."

Germany says economy may grow 4% this year as pandemic eases

German GDP slumps but optimism up as vaccinations increase