The $1 trillion infrastructure bill that President Joe Biden signs into law represents a historic achievement at a time of deeply fractured politics. But the compromises needed to bridge the political divide suggest that the spending might not be as transformative as Biden has promised for the U.S. economy.

Faced with flagging support as the U.S. continues to slog through a pandemic and rising inflation, the president has treated infrastructure as proof that government can function again. Ahead of Monday's signing ceremony, he instructed his Cabinet on Friday to rigorously police the coming investments in roads, bridges, water systems, broadband, ports, electric vehicles and the power grid to ensure they pay off.

“It’s hard, but we can still come together to get something big done for the American people,” Biden said. “It will create millions of new jobs. It will grow the economy. And we’ll win the world economic competition that we’re engaged in in the second quarter of the 21st century with China and many other countries around the world.” 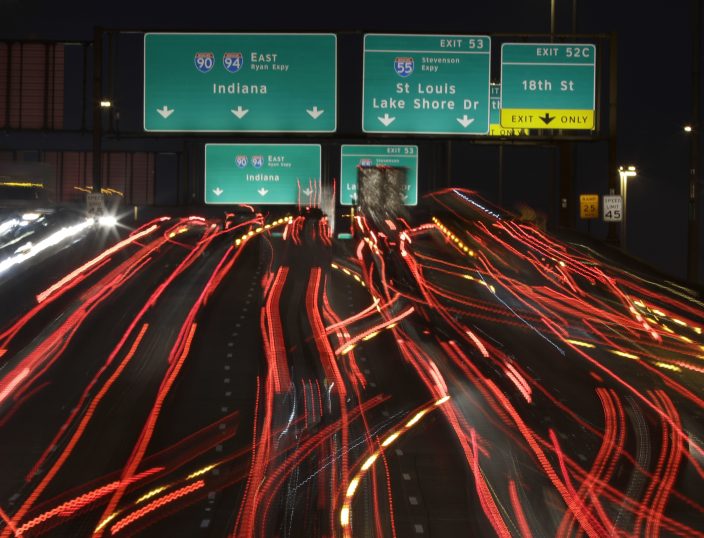 FILE - Motorist traveling southbound on Interstates 90 and 94 for Indiana approach the intersection with Interstate 55 for St. Louis, Dec. 21, 2017, in Chicago. The $1 trillion infrastructure bill that President Joe Biden signs into law on Monday, Nov. 15, 2021, represents a historic achievement at a time of deeply fractured politics. But the compromises needed to bridge the political divide suggest that the spending might not be as transformative as Biden has promised for the U.S. economy. (AP PhotoCharles Rex Arbogast, File)

Biden held off on signing the hard-fought infrastructure deal after it passed on Nov. 5 until legislators would be back from a congressional recess and could join in a splashy bipartisan event. The gathering Monday on the White House lawn will include governors and mayors of both parties and labor and business leaders. On Sunday night before the signing, the White House announced Mitch Landrieu, the former New Orleans mayor, would coordinate the implementation of the infrastructure spending.

The president began the process of selling it to the broader public with a trip last week to the Port of Baltimore. He'll go to New Hampshire on Tuesday to visit a bridge on the state's “red list” for repair and to Detroit on Wednesday for a stop at General Motors' electric vehicle assembly plant.

In order to achieve a bipartisan deal, the president had to cut back his initial ambition to spend $2.3 trillion on infrastructure by more than half. The bill that becomes law on Monday in reality includes about $550 billion in new spending over 10 years, since some of the expenditures in the package were already planned. Yet the administration still views the bill as a national project with a broad range of investments and the potential ways to improve people's lives with clean drinking water and high-speed internet. 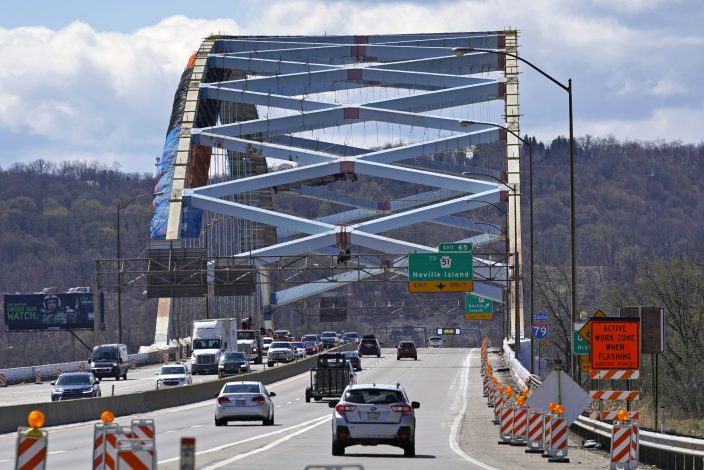 FILE - Traffic on Interstate 79 crosses the Ohio River on the Neville Island Bridge as it undergoes a refurbishing near Pittsburgh, April 2, 2021. The $1 trillion infrastructure bill that President Joe Biden signs into law on Monday, Nov. 15, represents a historic achievement at a time of deeply fractured politics. But the compromises needed to bridge the political divide suggest that the spending might not be as transformative as Biden has promised for the U.S. economy. (AP PhotoGene J. Puskar, File)

Historians, economists and engineers interviewed by The Associated Press welcomed Biden’s efforts. But they stressed that $1 trillion was not nearly enough to overcome the government’s failure for decades to maintain and upgrade the country’s infrastructure. The politics essentially forced a trade-off in terms of potential impact not just on the climate but on the ability to outpace the rest of the world this century and remain the dominant economic power.

“We’ve got to be sober here about what our infrastructure gap is in terms of a level of investment and go into this eyes wide open, that this is not going to solve our infrastructure problems across the nation,” said David Van Slyke, dean of the Maxwell School of Citizenship and Public Affairs at Syracuse University.

Biden also tried unsuccessfully to tie the infrastructure package to passage of a broader package of $1.85 trillion in proposed spending on families, health care and a shift to renewable energy that could help address climate change. That measure has yet to gain sufficient support from the narrow Democratic majorities in the Senate and House. Biden continues to work to appease skeptics of the broader package such as Sen. Joe Manchin, D-W.Va., while also holding on to the most liberal Democrats. 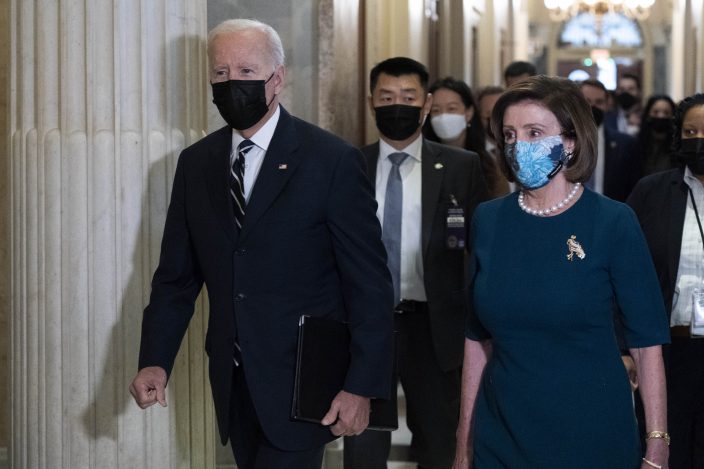 FILE - President Joe Biden walks with Speaker of the House Nancy Pelosi of Calif., on Capitol Hill in Washington,, Oct. 28, 2021, during a visit to meet with House Democrats. The $1 trillion infrastructure bill that President Joe Biden signs into law on Monday, Nov. 15, represents a historic achievement at a time of deeply fractured politics. But the compromises needed to bridge the political divide suggest that the spending might not be as transformative as Biden has promised for the U.S. economy. (AP PhotoJose Luis Magana, File)

The haggling over infrastructure has shown that Biden can still bring together Democrats and Republicans, even as tensions continue to mount over the Jan. 6 assault on the U.S. Capitol by supporters of Donald Trump who falsely believe that Biden was not legitimately elected president. Yet the result is a product that might not meet the existential threat of climate change or the transformative legacy of Franklin Delano Roosevelt, whose portrait hangs in Biden's Oval Office.

“Yes, the Infrastructure Investment and Jobs Act is a big deal,” said Peter Norton, a history professor in the University of Virginia's engineering department. “But the bill is not transformational, because most of it is more of the same.”

Norton compared the limited action on climate change to the start of World War II, when Roosevelt and Congress reoriented the entire U.S. economy after the attack on Pearl Harbor. Within two months, there was a ban on auto production. Dealerships had no new cars to sell for four years as factories focused on weapons and war materiel. To conserve fuel consumption, a national speed limit of 35 mph was introduced.

For his part, Biden has treated compromise as both a necessity and a virtue. It's evidence to the rest of the world that democracies can function and counters the economic and technological rise of an authoritarian China. When the agreement with Republican senators was first announced in June, he noted that everyone had to give up a little in order to achieve an infrastructure deal that eluded former presidents Barack Obama and Trump.

“Neither side got everything they want in this deal,” Biden said at the time. “That’s what it means to compromise.”

McConnell says the country “desperately needs” the new infrastructure money but has indicated that he plans to skip Monday's signing ceremony, telling WHAS radio in Louisville, Kentucky, that he has “other things” to do.

There are multiple ways of analyzing the size of the infrastructure bill. White House aides anchored their research to the historical benchmark of building the interstate highway system from 1957 to 1966. By that metric, Biden can rightly claim that the additional $550 billion in infrastructure spending would be more than double the cost of the highway system when adjusted by inflation.

But the bill also addresses years of deferred repairs and the removal of lead water pipes, reflecting the fact that the government failed to adequately fund infrastructure for several decades. Judged by the size of the need, Biden's spending is a merely a start to close a massive gap.

Yale University economist Ray Fair studied the size of the U.S. infrastructure gap in a September research paper. He found a sharp decline in infrastructure investment as a percent of the overall U.S. economy starting in 1970, a trend shared by no other country, though some nations did begin to invest less in infrastructure somewhat later.

When Fair looked at Biden's infrastructure bill, he examined the size of the shortfall if infrastructure investments had continued at the 1970 pace. He found that Biden's spending covered about 10% of a $5.2 trillion gap.

“The bottom line is that the current infrastructure bill is quite modest,” Fair said.

Army Corps of Engineers gets $14B to help ease supply chains

Biden to showcase Baltimore as fertile ground for his agenda