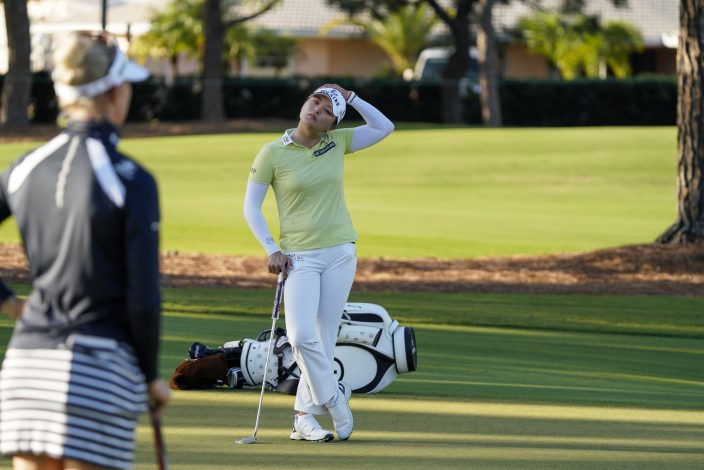 Notes: The top 60 in the Race to CME Globe are eligible for the final tournament of the year. Once at Tiburon, everything starts from scratch. The winner of the tournament gets the $1.5 million first prize and is crowned Race to CME Globe champion. ... The real battle is the points-based award for LPGA player of the year between Nelly Korda and Jin Young Ko. Korda has a 12-point lead. Each has four victories this year. Korda also has a major. Her win total does not include the Olympic gold medal. ... Ko spent most of last year home in South Korea to ride out the pandemic. The CME Group Tour Championship was only her fourth start on the LPGA Tour. She won to capture the Race to CME Globe for the first time. ... ANA Inspiration winner Patty Tavatanakit and Solheim Cup star Leona Maguire are among seven LPGA Tour rookies who made the 60-player field. ... Tiburon Golf Club also hosts the QBE Shootout next month. Lexi Thompson is playing in both events.

Next tournament: End of season.

Notes: The DP World Tour Championship is for the leading 54 players in the Race to Dubai. ... Jon Rahm, who is No. 3 in the Race to Dubai, has decided not to play. He won the Race to Dubai two years ago. ... Viktor Hovland is No. 12 in the Race to Dubai and not playing. ... British Open champion Collin Morikawa and BMW PGA Championship winner Billy Horschel give Americans the top two positions in the standings. No American has ever led the European Tour in points (Race to Dubai) or money (Order of Merit). ... Rory McIlroy is in the field for the first time since he won the CJ Cup in Las Vegas. ... Patrick Reed and Sergio Garcia were given special exemptions despite not meeting the minimum required tournaments. ... Lee Westwood won the Race to Dubai last year. He did not finish among the top 100 this year. ... Padraig Harrington narrowly missed out on qualifying despite his duties as Ryder Cup captain. ... Joachim B. Hansen earned a spot in the field by winning the Dubai Championship last week.

Next tournament: New season starts with Joburg Open on Nov. 25-28.

Notes: This is the final official PGA Tour event of 2021, and the last chance for players to qualify for the Sentry Tournament of Champions at Kapalua. ... Adam Scott is playing at Sea Island for the first time. ... The field has one player from the top 10 in Louis Oosthuizen, who took a month off after the CJ Cup in Las Vegas. ... Among those in the field who live on Sea Island are Harris English, Zach Johnson and tournament host Davis Love III. ... Love has not played on the PGA Tour since the RBC Heritage at Hilton Head in April. He has missed eight of his last nine cuts on the PGA Tour. ... Sixteen players in the field already have secured their spots in the Masters. ... The tournament is held on two courses to allow for more playing opportunities. The 156-man field is the largest for the fall. ... Robert Streb's only two PGA Tour victories are at Sea Island, six years apart. ... Scottie Scheffler is playing. He has tied for second and finished fourth the last two weeks as he tries to win for the first time on the PGA Tour.

Next tournament: Sentry Tournament of Champions on Jan. 6-9.

Next tournament: PNC Championship on Dec. 18-19.

LPGA has 1st major in Palm Springs for the final time

Strong field assembled for Tampa as Masters gets closer