Nelly Korda won her first major championship, rose to No. 1 in the world for the first time in her career and topped it off by winning an Olympic gold medal.

That didn’t stop the quest to improve, which is why she has a new coach.

Fresh off her fourth LPGA Tour victory of the year, the 23-year-old American said she began working a few weeks ago with Jamie Mulligan, the longtime pro at Virginia Country Club in Long Beach, California, whose clientele most notably includes Patrick Cantlay. 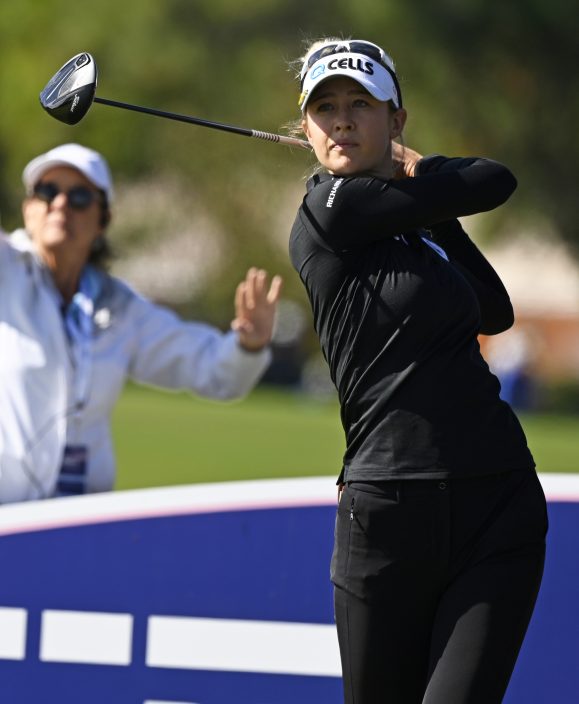 Korda said she “surfed around” for a new coach, an appropriate choice of words since Mulligan is a surfer at heart when he’s not doing his day job.

Why Mulligan? It starts with her sister, Jessica.

“I know Jess is really good friends with Patrick Cantlay and, I don’t know, I’ve kind of surfed around,” Korda said. “I thought about a couple coaches and I liked his demeanor. I like the way he’s super positive. I think we’ve just clicked kind of since the first day and I really enjoy being around him.” 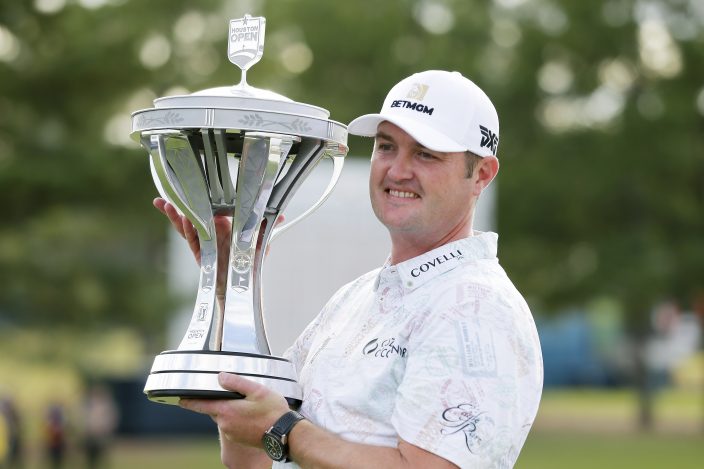 She said she still uses longtime coach David Whelan for her short game.

Korda says she isn’t doing much with her swing because she’s in the middle of the season. The CME Group Tour Championship is the last official event of the year, and she also is playing with her father, former Australian Open tennis champion Petr Korda, in the PNC Championship in December.

“I definitely do know my golf swing. I’ve kind of gotten really obsessed with it in the past couple of years,” she said. “I think it’s very important since you’re kind of by yourself week in and week out to be your own coach in a sense and kind of know some stuff about it. 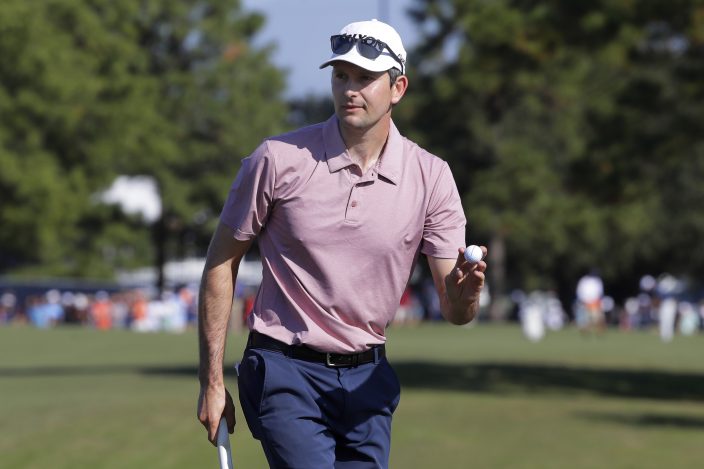 Martin Trainer acknowledges the gallery after sinking his putt on the first green during the final round of the Houston Open golf tournament Sunday, Nov. 14, 2021, in Houston. (AP PhotoMichael Wyke)

“But I think it’s super important also to have the guidance and to have someone to lean on.”

Former Women's PGA champion Hannah Green of Australia has earned $974,350 over the last two years combined on the LPGA Tour. 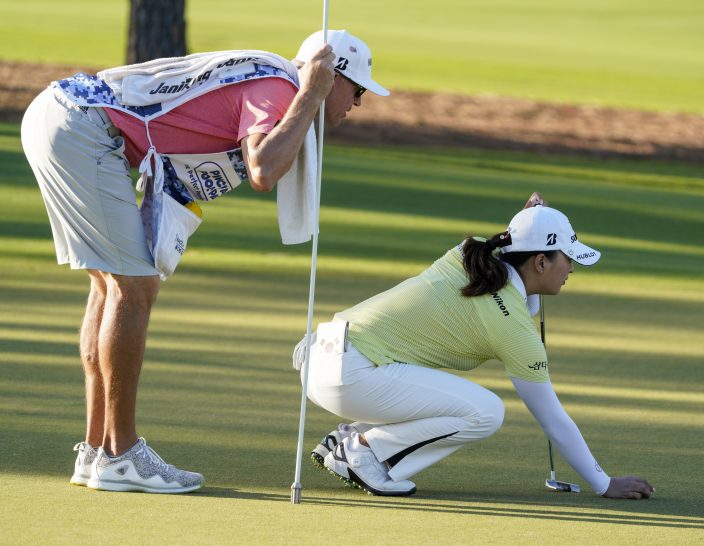 Jin Young Ko, right, lines up her shot in front of her caddie David Booker during the first round of the LPGA Pelican Women's Championship golf tournament at Pelican Golf Club, Thursday, Nov. 11, 2021, in Belleair, Fla. (Martha Asencio-RhineTampa Bay Times via AP)

She picked up $1 million on Tuesday for her play on the par 5s.

Green and Matthew Wolff on the PGA Tour were officially honored for the Aon Risk-Reward Challenge, which offers $1 million to the player on each tour who has the lowest average score on a designated par 5 each week.

Green's performance was impressive. She made birdie 74% of the time on the designated holes, she made eagle 9% of the time and she never made worse than par.

It wasn't an accident.

Green said she looked at the weekly fact sheet on the LPGA Tour to see which hole was in play for the Risk-Reward Challenge and made sure she practiced and studied her options. She added length to her game and could get to the green for most of the par 5s in two.

But she wasn't paying attention to the race until a friend pointed out at the Women's British Open in August that she was leading.

“With seven or eight events left in the year anything can really happen, so the last three or four events I was definitely paying attention,” Green said. “When I played in Korea, I made two birdies, which is what I needed to do. I’m not very emotional when I’m on the golf course. I don’t really fist pump a lot or high-five with my caddie. But that was a big moment.”

She referred to the bonus as a life-changer, and that starts with real estate.

“I actually wanted to buy a house during the offseason,” she said. “It is quite difficult to buy houses in Australia, especially as a sports person with the not-frequent income, and as well as foreign income. So in a way for me it will be life changing. I could almost pay my house off and not have a mortgage, so it’s setting me up for after I finish playing golf.”

Renee Powell is the inaugural winner of the Charlie Sifford Award created by the World Golf Hall of Fame to honor those who advanced diversity in golf.

Powell was the second Black woman to compete on the LPGA Tour (1967-1980). For the last 25 years, she has served as head pro at Clearview Golf Club in Ohio, which her father, William Powell, established in 1946 as the first American course designed, built, owned and operated by a Black man.

“As a youngster my parents fought to get me into tournaments when I was not welcomed because of the color of my skin, which instilled in me how important it is to get young people into the game to help build their self-confidence,” Powell said. “I’m honored to be the first recipient of this award and to see Charlie Sifford be recognized for breaking down barriers that never should have been put in front of him and all others of color who strived to play this game.”

Sifford fought the PGA of America’s “Caucasian-only clause” and became its first Black member in 1960. He went on to the win twice, including the Los Angeles Open that now offers a sponsor exemption in his name. In 2004, he became the first Black player inducted into the Hall of Fame.

IT'S HOW YOU FINISH

According to the PGA Tour, Jason Kokrak is the fifth player since 1983 to post a score of 41 or higher over nine holes and still win the tournament. He played his final seven holes in 7-over par when he completed the second round of the Houston Open on Saturday morning. He closed with rounds of 66-65 to win by two.

The record since 1983 (when the PGA Tour began keeping more detailed records) belongs to Kenny Knox in the 1986 Honda Classic. Knox shot 42 on the back nine of the TPC Eagle Trace, which wasn’t awful considering the wind blew so hard that no one broke par that day.

The most impressive might have been Mike Sullivan in the 1989 Houston Open. He shot 41 on his opening nine holes for a 76 in the first round. He made the cut on the number and was 13 shots behind and shot 65 the final day to erase a seven-shot deficit and win.

Drop the number by one shot, and it's impossible to overlook Tiger Woods. He shot 40 on his front nine at Augusta National in his first Masters as a pro and went on to win by 12 shots.

Patrick Cantlay decided not to play the Hero World Challenge, giving him a full three months off after the Ryder Cup. He was replaced in the field in the Bahamas by Sam Burns. ... Stephan Jaeger has won the Korn Ferry Tour player of the year. ... After two years, the Pelican Women's Championship is extending its deal with the LPGA Tour for an additional four years and raising prize money next year to $2 million. ... Former Secretary of State Condoleezza Rice is the 2022 recipient of the Ambassador of Golf Award that will be presented in July at the Senior Players Championship at Firestone. The award is for those who have fostered the ideals of golf on an international level.

“I would say golf is really hard and I need more practice.” — Jin Young Ko, when asked what she learned about herself in a four-win season on the LPGA Tour.

Not everyone seems to mind the Saudi-Pebble Beach tradeoff