The New Orleans Saints’ first three game-skid since 2016 has cast doubt on their prospects for what once looked like a promising season.

When they rallied to beat Tampa Bay on Oct. 31 in a game marred by starting quarterback Jameis Winston's season-ending knee injury, the Saints were on a three-game winning streak. They were on the cusp of moving into a first-place tie with the Buccaneers in the NFC South — if New Orleans could beat Atlanta the following week.

The Saints lost that game on a field goal as time expired, dropped another by just two points in Tennessee, then imploded against a Philadelphia squad that entered that Sunday's meeting two games below .500. 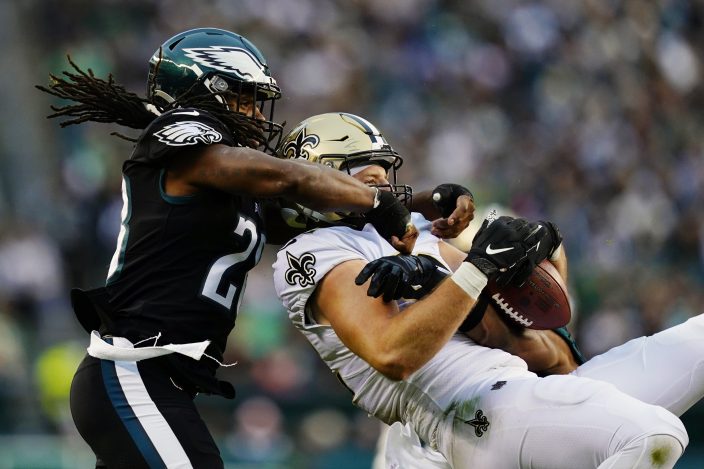 The Saints committed three turnovers that led to 17 Eagles points and New Orleans' defense, which entered the weekend ranked first in the NFL against the run, gave up 242 yards rushing, or 169.1 yards more than their previous average.

“Obviously, we didn’t do enough in any of the three phases to win a game like that on the road," Saints coach Sean Payton said Monday after reviewing video of the Week 11 loss. “The turnovers on offense are killer plays. Defensively we still struggled just with their zone read, particularly as the game wore on. That was frustrating.”

A theme in the last three Saints losses has been slow starts. During the slide, the Saints have zero first-quarter points and just 13 second-quarter points. For the season, they've scored just 24 points in all first quarters combined. 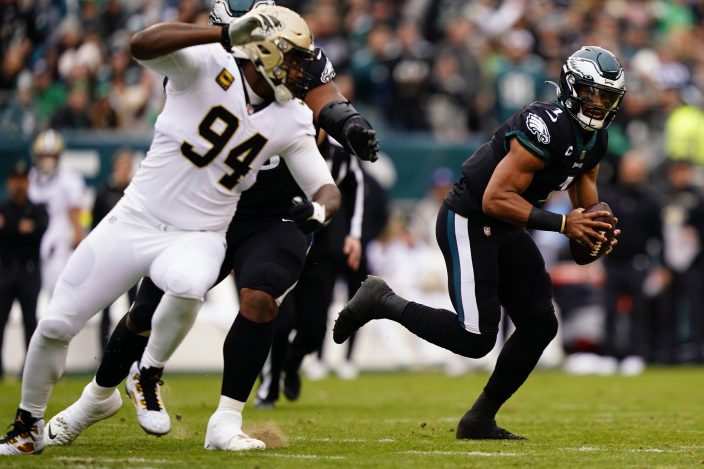 Philadelphia Eagles' Jalen Hurts scrambles during the first half of an NFL football game against the New Orleans Saints, Sunday, Nov. 21, 2021, in Philadelphia. (AP PhotoDerik Hamilton)

Part of the reason for that, Payton said, is that New Orleans is trying to control the ball with the run, in contrast to many of the past 15 seasons when the Saints, with record-setting Drew Brees at QB, were among the NFL's top passing clubs.

“I mean, we're not coming out just airing the football around," Payton said. “This is a different type of team right now, the way we're built right now offensively.”

That being the case, the Saints were certainly not helped by the absences of banged-up running back Alvin Kamara, as well as starting offensive tackles Terron Armstead and Ryan Ramczyk.

Now at 5-5, the Saints remain very much in the playoff picture, but with several seemingly difficult matchups approaching, starting with a Thanksgiving night home game against a Buffalo squad that is expected to contend in the AFC, but has struggled itself lately.

“We can do it. I think we have the players,” quarterback Trevor Siemian said. "We know exactly where we’re at. We have to string some (wins) together, but it starts with this Thursday. It’s one of those short weeks where a lot of times, maybe, you’re like, ‘I need some more time for my body.’ But I think a lot of us are looking forward to playing again quickly.”

When the offense has stalled, the Saints' punt coverage has been solid. Blake Gillickin averaged 49.8 yards on six punts at Philadelphia, with two punts forcing the Eagles to start on their 4-yard line and one on their 15.

The offensive line is banged up and, with both starting tackles out, struggled to prevent the Eagles from getting regular pressure in the backfield. Although Siemian avoided getting sacked, he misfired on 18 of 40 passes, including his first two interceptions of the season and a handful of throwaways.

Defensive end Marcus Davenport led the Saints on Sunday with 10 total tackles and 1 1/2 sacks, along with a tackle for loss and four quarterback pressures. Tight end Adam Trautman also had his best game this season, with five catches for 58 yards and a very difficult touchdown catch on a back-shoulder throw.

Trautman left Sunday's game with a knee injury in the fourth quarter. Davenport also was on New Orleans' injury report on Monday with an ailing shoulder. The Saints also are eagerly awaiting the returns of Kamara (knee), Armstead (knee/shoulder) and Ramczyk (knee), as well as reserve defensive end Tanoh Kpassagnon (ankle), whose four sacks are tied for second on the club with Cameron Jordan.

9 — The number of consecutive failures the Saints have had on 2-point conversion tries after missing another in Philadelphia on Sunday.

A tough stretch awaits. After host the Bills just four days after their loss in Philadelphia, the Saints have another Thursday night game against NFC East leader Dallas.

“We have to get back to work and get ready for a couple of good teams," Payton said. "It’s going to be on us quick.”