As Erin Morley sang on the big stage of the Metropolitan Opera, Matthew Aucoin sat in the first row of the orchestra, his score in front of him, taking notes.

Unlike most of her performances, Morley could use rehearsals to suggest adjusting notes to fit her soprano.

Known primarily for Verdi, Wagner, Mozart and Strauss, the Met is presenting three company premieres of 21st century works this season. Aucoin’s “Eurydice,” based on Sarah Ruhl’s 2003 play, opens Tuesday night in the first of seven performances running through Dec. 16. Terence Blanchard’s “Fire Shut Up in My Bones” opened the season, the Met's first work by a Black composer, and Brett Dean’s “Hamlet” will be presented in May. 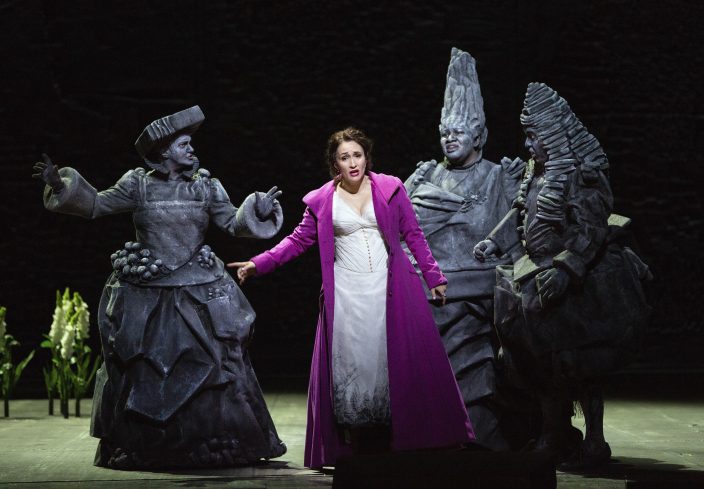 Stacey Tappan as Little Stone, from left, Erin Morley as Eurydice, Ronnita Miller as Big Stone,,and Chad Shelton as Loud Stone, appear during a performance of Matthew Aucoin's "Eurydice" at the Metropolitan Opera in New York. Aucoin’s “Eurydice" opens at the Metropolitan Opera on Tuesday night in the first seven performances running through Dec. 16. (Marty SohlMet Opera via AP)

Aucoin and Ruhl were paired by the composer’s sister, the playwright Christine Aucoin, and André Bishop, the artistic director of Lincoln Center Theater, which commissioned the piece as part of its joint new works program with the Met.

“Writing it really kind of set me on fire creatively, so I thought ‘I want to go deeper here,’ but I didn’t really want to just spend 2 1/2 hours delving into male artistic narcissism, so both my sister and Andre said, 'You got to call Sarah Ruhl.'”

Aucoin and Ruhl met for lunch in a Manhattan restaurant and decided to adapt Ruhl’s modern-day retelling of the legend focusing on Eurydice’s point of view, rather than Orpheus’ descent to Hades to rescue her.

Operatic versions have included Monteverdi’s “L’Orfeo” from 1607, Gluck’s “Orfeo ed Euridice” from 1762 and Offenbach’s “Orphée aux enfers" from 1858, with its famous “Can Can.” More recent renditions have included Philip Glass’ “Orphée” in 1993 and Anaïs Mitchell’s hit musical “Hadestown,” which opened on Broadway in 2019.

“It’s catnip for composers, isn’t it?” Aucoin said. “It kind of says that music can conquer death, but humans will always screw it up. It sort of says that we’re not worthy of music, and so I think it captures something really essential, which is that music is both human and more than human.”

Ruhl wrote the libretto, Aucoin composed from 2016-19 and the work premiered at the LA Opera on Feb. 1, 2020. The composer conducted in LA but Met music director Yannick Nézet-Séguin will lead the New York performance with Morley taking over the title role from Danielle de Niese and baritone Nathan Berg replacing Rod Gilfrey as Eurydice’s father. Holdovers include baritone Joshua Hopkins (Orpheus) and tenor Barry Banks (Hades).

“I think Sarah’s play is much, much more than a reimagining of the myth," Aucoin said. “The myth is part of the play, but really it’s an autobiographical deep dive into a young woman’s psyche.”

The Met returned from the longest shutdown in its 138-year history when it opened the season with Terence Blanchard’s “Fire Shut Up in My Bones” from 2019, its first work by a Black composer. Brett Dean’s “Hamlet,” which opened at Britain’s Glyndebourne Festival in 2017, follows in May, and next season includes Kevin Puts’ “The Hours” with Renée Fleming and 2023-24 features Anthony Davis’ “X: The Life and Times of Malcolm X.”

Now 31 and a resident of Stamford, Vermont, Aucoin didn’t listen to the previous Orpheus operas until after his work premiered.

Morley, 41, first looked at the lush, tonal score three years ago after she received a call from Met General Manager Peter Gelb.

“I did tell him that I thought that the role was was not perfectly tailored to my voice yet,” she recalled. And he said. 'That’s why we work with living composers.'”

Aucoin shifted notes higher in the register, a process that continued through rehearsals. Between accepting the role and now, Morley became the breakout star of the Met’s At-Home Gala Zoom gala, accompanying herself on the piano in “Chacun le sait (Everyone Knows It)” from Donizetti’s “La Fille du Régiment (The Daughter of the Regiment).”

"There are certainly challenges. One is that there is no reference recording. I had not heard the orchestration in all its glory until this past week,” she said just a few days before the opening. “There’s a lot of contrast in the role. There are all of these sort of very chatty sections and then there are moments of extreme lyricism. And all of the rhythms are quite complicated, and that is time consuming.”

Aucoin and Ruhl have created an accessible mix of myth, fantasy and humor.

"I think that is really what a 21st century opera should be,” Morley said. “It needs to be warm. Even if it’s tragic, it needs to be beautiful. I have long said that one of my pet peeves about contemporary music is that there is no room for comedy. What I’m so pleased to see in Matt and Sarah’s work is that tragedy and comedy can live in the same space.”

Roma recovered from an early defic ...

EXPLAINER: Why fear of 5G halting flights has faded