Titans rookie cornerback Elijah Molden frequently talks to his father, Alex, a first-round pick by New Orleans in the 1996 draft, about football for advice.

When it comes to making a trip to a new stadium on the road like Gillette Stadium in Foxborough on Sunday, that’s not the type of scouting information the rookie wants from his father.

“I mean, there’s really only a handful of teams where he didn’t play,” Molden said. 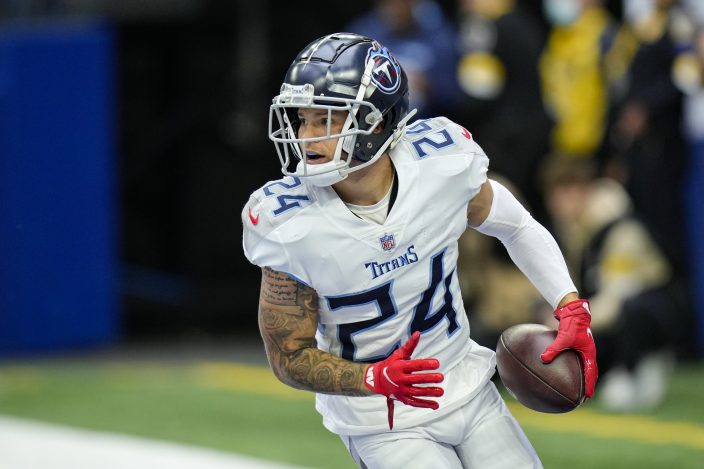 Tennessee Titans cornerback Elijah Molden (24) scores a touchdown on an interception against the Indianapolis Colts in the second half of an NFL football game in Indianapolis, Sunday, Oct. 31, 2021. (AP PhotoAJ Mast)

His father played 98 games over seven seasons, the first five in New Orleans, two in San Diego and two games his final season with Detroit. His son did notice his father playing against the Patriots on TV recently.

“I think we were watching, you know, Tom Brady’s new documentary, and I saw 25 for the Chargers on that,” the rookie cornerback said. “They were getting torched. But yeah, I think that he’s played almost everywhere.”

Elijah Molden, the 100th pick overall in April out of Washington, has started four of his 11 games this season. He also has a pick-6 in Tennessee’s win over Indianapolis.

Baltimore Ravens left tackle Ronnie Stanley has played only seven games since his All-Pro season in 2019 due to ankle injuries.

The 2016 first-round draft pick is staying busy while rehabbing. He recently launched the Ronnie Stanley Foundation with a mission to improve the quality of life for rescue dogs and to provide training that cultivates therapeutic properties, and match each rescue with an individual who has faced a challenge in life such as a chronic illness or emotional trauma.

“I have three dogs, all rescues, and pretty much the whole point of the foundation is really to bridge the gap between dogs, and humans and show how beneficial each species can be for each other,” Stanley said on the AP Pro Football Podcast.

“I think a lot of people don’t truly understand the connection they can have with a dog until they have the dog, and I’m a perfect example. I didn’t really know how strong my bond would be with Lola, the first dog I adopted here in Baltimore. But we’re inseparable. She gets anxious when I’m not around. She’s pretty much tied to my hip.

"So I think for a lot of people, it’s just kind of taking that first step and really showing themselves how crazy in love this animal can be with you and how much better they can make your life.”

The Green Bay Packers will be relying on Yosh Nijman to protect Aaron Rodgers’ blind side with 2020 All-Pro left tackle David Bakhtiari still unavailable and Elgton Jenkins out for the rest of the season.

Nijman rarely played before this year but made his first three career starts earlier this season when an ankle injury sidelined Jenkins. As his role has increased, the 2019 undrafted free agent from Virginia Tech has started to reveal his personality.

Rodgers noticed that earlier this season after the Packers scored a touchdown.

“Out of nowhere Yosh comes into the frame and does ‘The Robot,’ and we’d never seen this personality from Yosh at all,” Rodgers said. “I mean Yosh is a great kid, very quiet though, kind of goes about his business, doesn’t say a whole lot, lets the other guys in the room be the funny guys. But him doing ‘The Robot,’ I think everybody was like, ‘Oh my gosh, Yosh, that was amazing. We need to see more of that.’ “

Nijman says he has enjoyed dancing ever since he was a kid. He even offered some tips after being asked to show off his dance moves at a Thursday media session.

“Every step you take, you’ve got to freeze frame,” Nijman said. “But the most important thing is to not show any facial expression when you’re doing ‘The Robot.’"

Minnesota Vikings equipment manager Dennis Ryan had to miss the game against Green Bay last Sunday because he tested positive for COVID-19. That happened to be the first time since 1979 that Ryan missed a game, a streak of 705 consecutive games worked, according to a tally by Vikings.com.

“He texted me that we should beat them,” coach Mike Zimmer said.

That they did, a 34-31 victory over the rival Packers that was inspiring enough for the head coach to award Ryan one of the three game balls he gave out in his postgame locker room speech — even though Ryan wasn’t there to receive the honor in real time.

“Everybody in this building loves Dennis. He’s a tireless worker,” Zimmer said. “He goes out of his way for everybody.”

NFL Notes: Pro Bowl is all in the family for Diggs brothers