Inflation is soaring, businesses are struggling to hire and President Joe Biden’s poll numbers have been in free-fall. The White House sees a common culprit for it all: COVID-19.

Biden’s team views the pandemic as the root cause of both the nation’s malaise and his own political woes. Finally controlling COVID-19, the White House believes, is the skeleton key to rejuvenating the country and reviving Biden’s own standing.

But the coronavirus challenge has proved to be vexing for the White House, with last summer’s premature claims of victory swamped by the more transmissible delta variant, stubborn millions of Americans unvaccinated and lingering economic effects from the pandemic's darkest days. 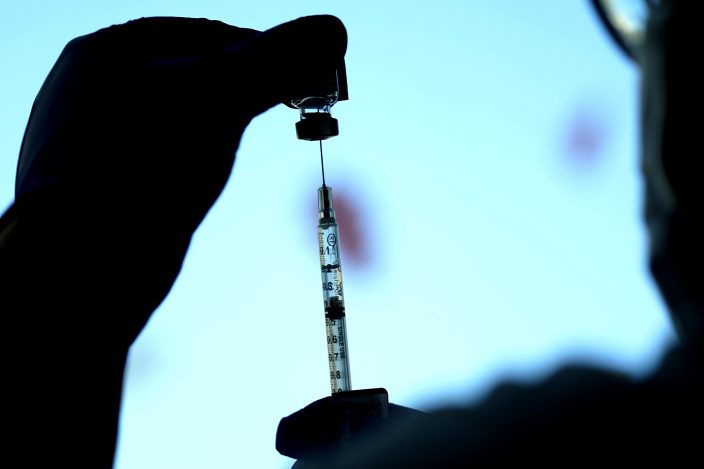 FILE - A dose of a Pfizer COVID-19 vaccine is prepared at Lurie Children's hospital, Nov. 5, 2021, in Chicago. The coronavirus challenge has proved to be vexing for the White House, with last summer’s premature claims of victory swamped by the more transmissible delta variant, stubborn millions of Americans unvaccinated and lingering economic effects from the pandemic's darkest days. (AP PhotoNam Y. Huh, File)

All of that as yet another variant of the virus, omicron, emerged overseas. It is worrying public health officials, leading to new travel bans and panicking markets as scientists race to understand how dangerous it may be.

Although the economy has actually been coming back, there are multiple signs that COVID-19 will leave its scars even if the pandemic fades.

For now, in the administration’s view, an intransigent minority that is resisting vaccination is spoiling the recovery for the rest of the country — forcing masks on the vaccinated and contributing to lingering anxiousness everywhere you look. FILE - Rhode Island Army National Guard Sgt. Juan Gomez looks over the post-inoculation waiting area at a coronavirus mass-vaccination site at the former Citizens Bank headquarters in Cranston, R.I., June 10, 2021. The coronavirus challenge has proved to be vexing for the White House, with last summer’s premature claims of victory swamped by the more transmissible delta variant, stubborn millions of Americans unvaccinated and lingering economic effects from the pandemic's darkest days. All of that as yet another variant of the virus emerged overseas, omicron, spreading fresh fears among public health officials, sparking new travel bans and panicking markets at week's end as scientists raced to understand how dangerous it may be. (AP PhotoDavid Goldman, File)

Asked why Americans aren't getting the message that the economy is improving, White House press secretary Jen Psaki said this past week: “We’re still in the middle of fighting a pandemic and people are sick and tired of that. We are, too."

The state of affairs, she said, affects everything from how people feel about sending their kids out the door to the price for a gallon of gas.

The administration views vaccination mandates as critical, not only to preventing avoidable illness and death but to safeguarding the economic recovery — and salvaging Biden’s political position. FILE - President Joe Biden talks about the newly approved COVID-19 vaccine for children ages 5-11 from the South Court Auditorium on the White House complex in Washington, Nov. 3, 2021. Biden’s team views the pandemic as the root cause of both the nation’s malaise and his own political woes. It sees getting more people vaccinated and finally controlling COVID-19 as the key to reviving the country and Biden’s own standing. But the coronavirus has proved to be a vexing challenge for the White House. (AP PhotoSusan Walsh, File)

“We have the tools to accelerate the path out of this pandemic widely available,” White House COVID-19 coordinator Jeff Zients told a coronavirus briefing. While he ruled out large-scale lockdowns like the United States experienced in 2020 and like those popping up again across Europe, Zients renewed the administration’s appeals for more Americans to get their shots.

But on Friday, the discovery of the new variant in southern Africa had much of the world acting to to shut down travel from the region and contain a threat that the World Health Organization suggested could be worse than the ravaging waves from delta.

Inside the White House and among allies of the president, there has been frustration for weeks over the slow government action to approve booster shots for all adults. The regulatory process, they fear, contributed to misinformation and confusion around the boosters and means the nation isn't optimally protected for the holiday season.

Biden on Friday appealed for unvaccinated Americans to be “responsible” and get the shot and for those eligible for a booster to get that, too. “That is the minimum that everyone should be doing. ... We always talk about whether this is about freedom, but I think it's a patriotic responsibility to do that.”

Still, for all the hand-wringing over Biden’s sagging standing with Americans, Democrats say a turnaround may be within reach.

“Getting past the pandemic unlocks the door for the economy, for our way of life and for people feeling less divided,” he added.

To Biden’s critics, though, it’s a stretch to blame all the nation’s problems on COVID-19 or to think that containing the virus will solve them.

Senate Republican leader Mitch McConnell of Kentucky, in fact, puts the blame for high prices on Biden's big pandemic relief package, saying recently: “There is no question what is keeping working Americans awake at night. Inflation. The runaway prices and unpredictability that Democrats’ policies have fueled.”

The lingering effects of the virus have taken a toll on the president’s approval ratings, even if his handling of the virus has been seen as a relative strength.

In an October AP-NORC poll, 54% of Americans said they approved of Biden’s job on the pandemic. That was somewhat higher than his approval rating overall and much higher than approval on his handling of the economy, at 48% and 41%, respectively.

As recently as July, 66% had approved of Biden on COVID-19 and 59% approved of his job performance overall.

In last month’s poll, only about one-third of Americans said the nation was heading in the right direction, down from about half in late February.

Views of the economy have dimmed as well, with only about one-third saying conditions are good, compared with close to half in September.

To the White House, fixing blame on the pandemic is emerging as a modern version of the old “It’s the economy, stupid” mantra from the Bill Clinton years.

When Psaki was pressed on what the administration was doing to contain higher prices, she replied: “We know what the root causes of those are, right? Global supply chain issues."

“The best thing we can do as the government is to get the pandemic under control. That’s what the president’s number one focus is.”

The same message ripples throughout the administration.

“As long as the pandemic continues, there will be pandemic-driven shortages, which is why the best way to fix that is to end the pandemic,” Transportation Secretary Pete Buttigieg said recently, stressing the need for vaccination.

Economists largely endorse the sentiment, but caution that the solution is not simple.

“The root of the problems in the economy is the virus,” said Harvard economist James Stock, “and the best way to minimize the spread of the virus is to increase vaccinations. It’s the number one economic policy in my mind.”

But with experts predicting that COVID-19 is becoming endemic, Stock said, “you’ve got to be realistic that it’s not going to go away.”

Even if the virus fades, economists warn, there will be harmful lingering effects.

Goldman Sachs noted in a recent analysis that roughly half of the 5 million people who have left the labor force since the pandemic have retired, making it harder for businesses to regain lost jobs. Work by Stanford University economist Nicholas Bloom and others indicates that companies expect more people to keep working from home and shopping online, a problem for local retailers that depend on office workers to buy lunch and people to return to stores.

Just 5% of Americans' total work days were at home pre-pandemic, a figure that is now 25%, according to Bloom. More than three-quarters of workers surveyed by his colleagues and him would prefer to have at least one day a week working from home and nearly one-third would rather work from home for all five days. This could make it harder for employers to evaluate their workers and efficiently use office space.

The administration is also dealing with a global economy, so solving pandemic issues at home has its limits.

Coronavirus outbreaks in Asia shut down computer chip plants, worsening the shortage of semiconductors, one sign that vaccination worldwide could be as critical as the administration’s domestic efforts. One of the rationales for Biden’s infrastructure spending to strengthen the supply chain is to minimize the damage from these shutdowns.

“If a factory in Malaysia shuts down due to a COVID outbreak — which they have — it causes a ripple effect that can slow down auto manufacturing in Detroit,” Biden said in one recent speech. “Why? They can’t get the computer chips they need.”

A federal judge has refused to thr ...