Animal neglect used to be such a problem on the Leech Lake Reservation in northern Minnesota, with basic services like sterilization out of reach for many due to poverty and remoteness, that packs of stray dogs would sometimes bring traffic to a halt on the main highway.

Today, strays are rare. Kids are helping their elders in animal rescues, pet food and supplies are routinely distributed in the community and the first veterinary clinic in the main town, Cass Lake, is one final permit away from breaking ground.

It’s all thanks to a yearslong and increasingly organized push by several community members to improve animal welfare that is deeply rooted in cultural and spiritual values regarding the Ojibwe people’s relationship with all living creatures. 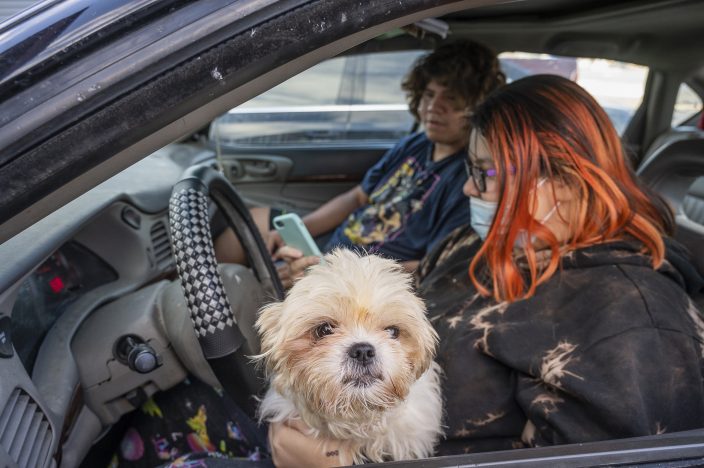 Devin Robinson, 16, and his sister Selena Rushman, 17, both of Cass Lake, Minn., wait with their dog Sweetie outside the Leech Lake Legacy clinic, Sunday, Nov. 21, 2021. They had brought some of Sweetie's puppies in for a wellness check and shots. For a decade, the nonprofit has been bringing veterinary services and taking away surrendered animals on the Leech Lake Reservation. (AP PhotoJack Rendulich)

“It helps animals, but it brings people up too,” said Rick Haaland, who has been leading the efforts among his fellow Ojibwe as community outreach manager with the Leech Lake tribal police. “Our pets are the ones who walk with us.”

Animals are central to Ojibwe beliefs and sacred origin stories.

According to one, which by tradition may be told only once snow blankets the northland, the Creator asked the original man and his wolf to travel the earth together, and on their journey they became as close as brothers. Their task completed, the Creator told them to go on separate paths, even though they both would be “feared, respected and misunderstood” by the people later joining them on earth. 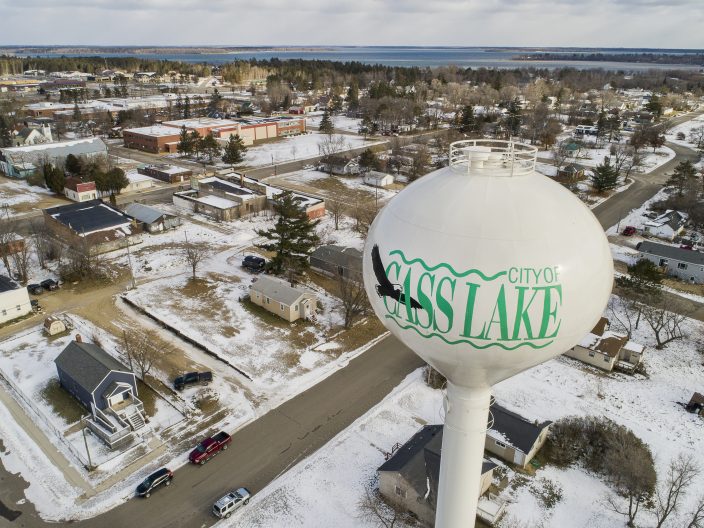 Since dogs are the wolf’s relatives, the story teaches, they should be brothers to today’s Native people, honored though separate.

So things like promoting pet care and bringing much-needed vet services to the reservation nestled among forests and lakes reinforce the Creator’s intentions for harmony between humans and animals — a value that some say faded over the years.

“Traditionally we were told to be grateful to animals. Cats and dogs have chosen to be with us and comfort us. But as we were assimilated, and went into deep poverty, our stories weren’t told. People forgot we need to care for them,” said Elaine Fleming, who started rescuing animals 10 years ago after holding a ceremony for them with prayers, singing and drums. 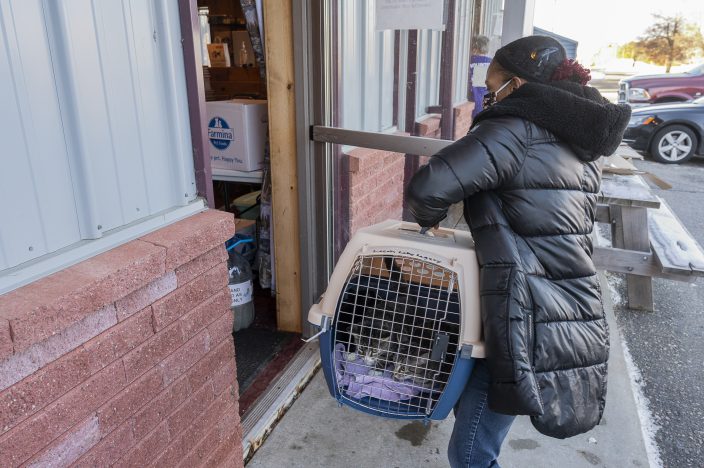 Leech Lake Legacy volunteer Engress Clark carries a kennel with some of the kittens that were abandoned in Cass Lake, Minn., Sunday, Nov. 21, 2021. Fifteen kittens were found in a plastic tote left in the local Walmart parking lot. (AP PhotoJack Rendulich)

Nearly 40% of Leech Lake’s population lives in poverty, making it hard to afford routine spaying and neutering, let alone emergency care that can run up to hundreds of dollars per surgery.

That meant that all too often, injured animals would die or be abandoned, as would litters of puppies and kittens nobody could afford to care for. 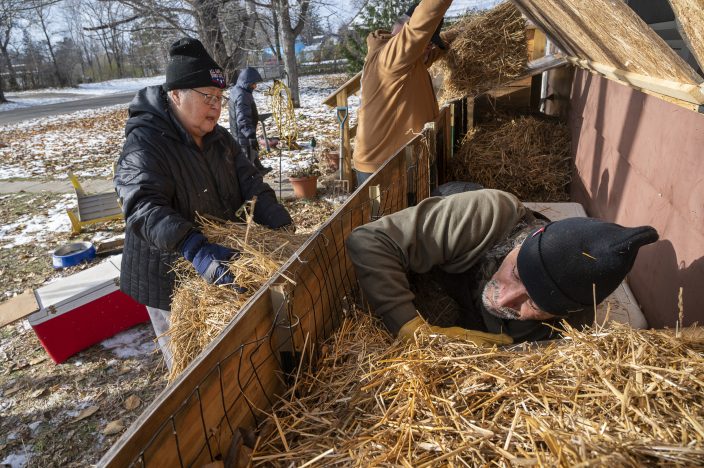 Rick Haaland holds a door for Preston Lassman as Elaine Fleming brings straw to be used in a large shelter on the front of Elaine's house in Cass Lake, Minn., on Sunday, Nov. 21, 2021. Elaine takes in stray and abandoned cats that often show up at her house to seek shelter. Haaland and Fleming have been leading efforts among their fellow Ojibwe community members to care for animals, something centrally important to Native American spiritual beliefs and traditions. (AP PhotoJack Rendulich)

Things started to turn around about a decade ago, when the Twin Cities-based nonprofit Leech Lake Legacy began taking in surrendered animals — more than 9,000 to date — for adoption elsewhere and regularly bringing a visiting mobile clinic to the reservation for low-cost vet services.

The pandemic has dealt a setback as care, especially spaying and neutering, was shut down for several months in 2020, according to Leech Lake Legacy founder Jenny Fitzer, and now it’s a scramble to get back on track.

“I can’t imagine when we’ll be able to catch up,” she said, adding that more than 400 animals are on her waitlist and might not get fixed for a year. 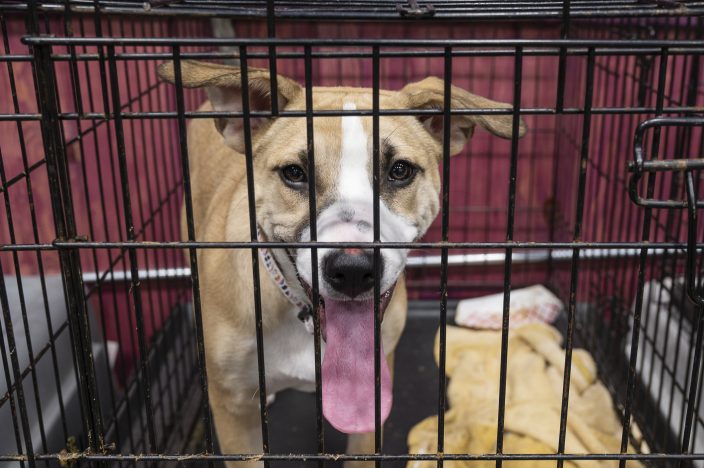 A recently surrendered dog waits patiently in the Leech Lake Legacy clinic in Cass Lake, Minn., on Sunday, Nov. 21, 2021. The dog will be spayed, given shots and then placed with a new owner. For a decade, the nonprofit has been bringing veterinary services and taking away surrendered animals on the Leech Lake Reservation. (AP PhotoJack Rendulich)

But a game changer for Leech Lake will be the permanent veterinary clinic, which Haaland hopes to start construction on before the winter deep freeze and could open its doors in the spring, supported by national animal welfare organizations as well as local fundraising. A veterinarian living right on the reservation would not only take care of routine sterilizations but also treat emergencies — currently it costs $500 just to get a doctor to come into Cass Lake after hours, according to Haaland.

He envisions having informational screenings playing in the waiting room, building on awareness programs the community is already doing on best practices like leashing and kenneling to keep pets from harm.

“I don’t think people don’t care,” said Haaland, who owns three dogs and a cat. “It’s education. That’s our way out of this.” 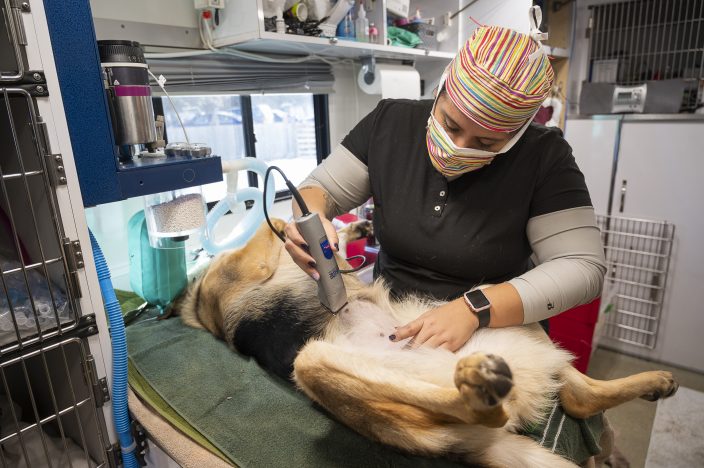 Vet tech Amber Portillo of Minneapolis, prepares a female dog to be spayed in the mobile surgical van at the Leech Lake Legacy clinic in Cass Lake, Minn., Sunday, Nov. 21, 2021. For a decade, the nonprofit has been bringing veterinary services and taking away surrendered animals on the Leech Lake Reservation. (AP PhotoJack Rendulich)

In the meantime, Haaland has been rescuing abandoned pets and driving injured animals to far-flung veterinaries, putting some 27,000 miles in just a year on a new van he acquired thanks to a grant from the Humane Society’s Pets for Life program. At $115,000 this year, the grant has also allowed him to work on animal care full-time.

At the end of a recent day spent rescuing a cat, two kittens and two 10-week-old golden-haired puppies, Haaland pulled up pictures on his phone of a pit bull stuck with hundreds of porcupine quills that required months of surgeries and treatment, donated by a veterinarian college. Fights with porcupines can kill dogs that are not properly housed, leashed and trained. 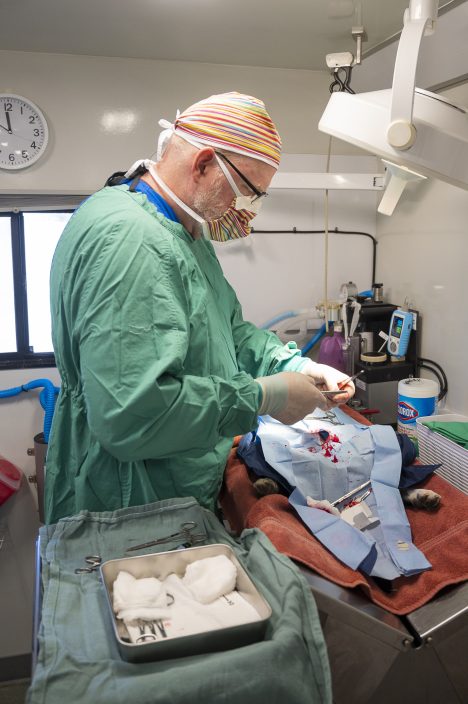 Dr. Paul Anderson spays a female dog in the mobile surgical van on Sunday, Nov. 21, 2021, in Cass Lake, Minn. He is a "High Volume Spay and Neuter" doctor who contracts with the Leech Lake Legacy. For a decade, the nonprofit has been bringing veterinary services and taking away surrendered animals on the Leech Lake Reservation. (AP PhotoJack Rendulich)

The yard where Haaland found the pit bull had garbage strewn all over, so Haaland offered the owners help cleaning up before returning the dog. When he arrived one early morning with other tribal members, the family had already done most of the work.

“They wanted to do better,” he said. “We are a proud people, with a chance to rise above the trauma of the past.”

Erik Redix, a scholar of Ojibwe history and member of the Lac Courte Oreilles Band of Ojibwe, said that “animals have spirits, just like us,” and their neglect is both an affront to the spiritual imperative of treating all living beings well and a symptom of broader social distress in impoverished Native lands. 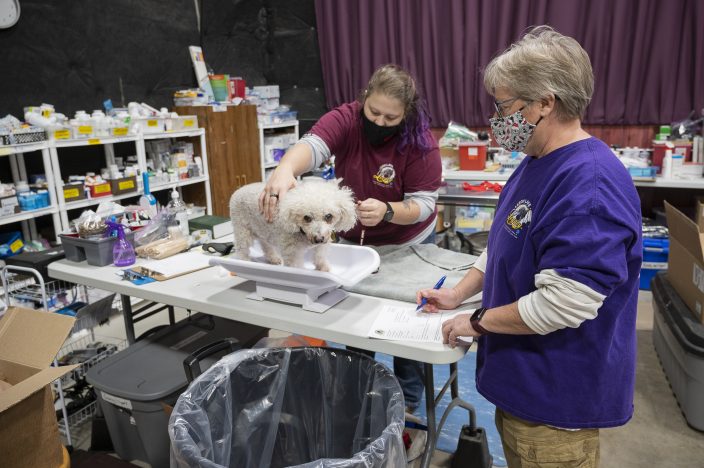 Leech Lake Legacy Director Jenny Fitzer, right, takes notes as vet tech Kris Stresemann of Minneapolis calms 17-year-old Lilly at the Legacy's clinic in Cass Lake, Minn., Sunday, Nov. 21, 2021. Lilly's owner regularly brings her in to have a cyst on her tail drained, for wellness checks and for nail trimming. For a decade, the nonprofit has been bringing veterinary services and taking away surrendered animals on the Leech Lake Reservation. (AP PhotoJack Rendulich)

So animal care revivals like the one in Leech Lake also signify a revitalization for Ojibwe society, he added — “to get us back to where it should be.” 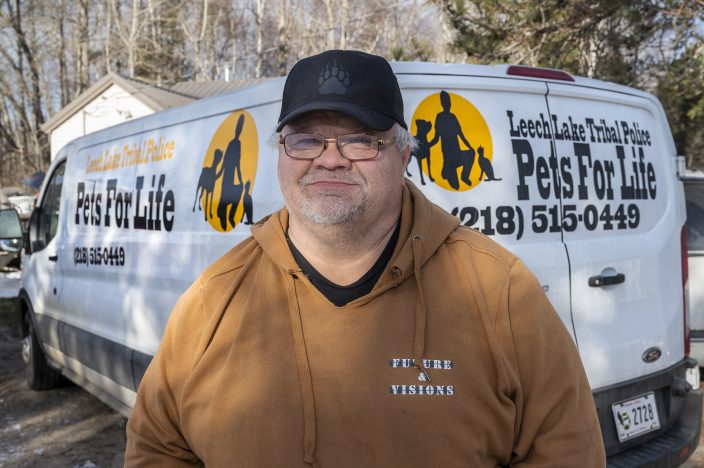 Rick Haaland of Bena, Minn., poses for a portrait on Sunday, Nov. 21, 2021. Haaland is the Community Outreach Manager for the Leech Lake Tribal Police. He and his fellow Ojibwe community members have been leading efforts to care for animals, something centrally important to Native American spiritual beliefs and traditions. (AP PhotoJack Rendulich) 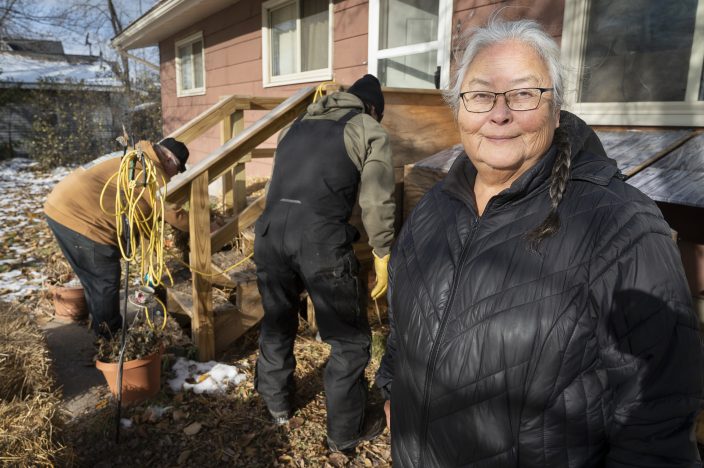 Elaine Fleming, of Cass Lake, Minn., stands outside of her home where she takes in stray and abandoned cats. In the background, friends Rick Haaland and Preston Lassman stuff straw under Elaine's front steps to provide shelter for the cats on Sunday, Nov. 21, 2021. Fleming and Haaland have been leading efforts among their fellow Ojibwe community members to care for animals, something centrally important to Native American spiritual beliefs and traditions. (AP PhotoJack Rendulich)

A court in Ukraine on Wednesday re ...

The Sundance Film Festival is back and online once more

The lights may be dim at the Eccle ...