The Cleveland Browns can only hope that a week off will enable them to secure solutions to a deep list of problems cramping their quest to return to the postseason.

Looking to close the gap on AFC North leaders Baltimore (8-3), Cleveland came up with a clunker of a performance Sunday night in a 16-10 defeat. Ill-timed and foolish penalties, an ineffective offense and a failure to capitalize on four interceptions added up to an agonizing defeat that dropped the Browns (6-6) into a last-place division tie.

“Very, very disappointed and frustrated,” Browns coach Kevin Stefanski said. “We've got to get to this bye week, fix some things, get healthy, unplug for a minute and then we've got Baltimore again for a stretch run.” 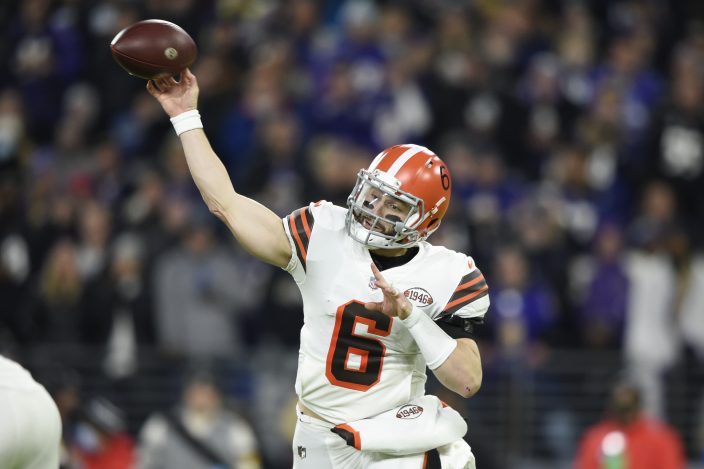 Cleveland Browns quarterback Baker Mayfield throws a pass against the Baltimore Ravens during the first half of an NFL football game, Sunday, Nov. 28, 2021, in Baltimore. (AP PhotoGail Burton)

In a scheduling quirk, the Browns get the upcoming weekend off before a rematch with the Ravens at home on Dec. 12. The Browns will have to do better than rush for 40 yards on 17 tries. They'll have to get more production out of quarterback Baker Mayfield and cut down on penalties such as roughing the passer and having 12 men on the field — twice.

Baltimore went up 3-0 after the Browns had an extra player on the field with the Ravens in punt formation. Things like that just shouldn't happen this late in the season, but that's how Sunday night went for the Browns. 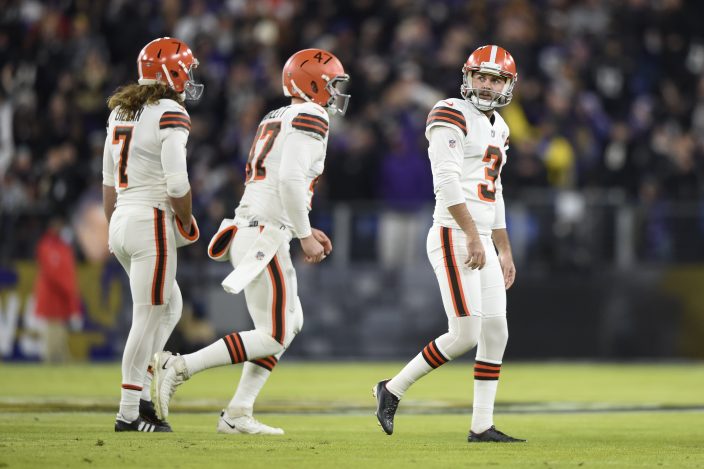 Cleveland Browns kicker Chase McLaughlin, right, looks on next to Jamie Gillan (7) and Charley Hughlett (47) after missing a field goal against the Baltimore Ravens during the first half of an NFL football game, Sunday, Nov. 28, 2021, in Baltimore. (AP PhotoGail Burton)

Last December, the Browns rang up 42 points in a loss to Baltimore. This time, they intercepted Ravens star quarterback Lamar Jackson four times and still finished with a measly 10 points.

“Very frustrating,” Mayfield said. “To me, that's kind of the story of our season so far, not being able to play complementary football.”

Mayfield has been battling injuries recently, though he felt better Sunday than the week before, and hopes a week off will bring more improvement. 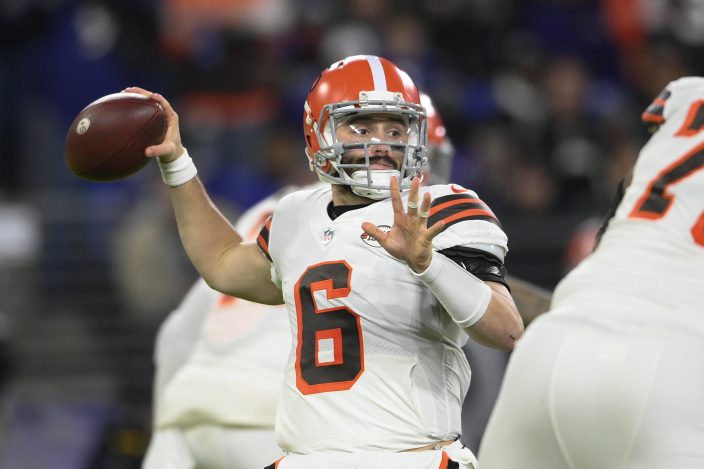 Cleveland Browns quarterback Baker Mayfield throws a pass against the Baltimore Ravens during the first half of an NFL football game, Sunday, Nov. 28, 2021, in Baltimore. (AP PhotoNick Wass)

“We just need to make more plays,” said Mayfield, who went 18 for 37 for 247 yards, including a third-quarter touchdown pass to David Njoku. But he also lost a fumble and was sacked twice.

Wide receiver Jarvis Landry also fumbled, holding the ball out for the taking while looking to pass on a trick play. Fortunately for the Browns, Jackson was picked off on the ensuing possession, and the Browns managed to get a field goal after moving 25 yards.

Even Cleveland's kicking game is under duress. Chase McLaughlin missed a chance to give the Browns an early lead when he was wide left with a 46-yard try. His successful effort clanged off the upright and through the posts.

Cleveland's defense was good enough, with the exception of a couple of plays that only the elusive Jackson could pull off — including a 39-yard completion to Mark Andrews and a 13-yard scoring strike in which he lofted a dart to Andrews after backpedaling to the 35.

“He’s a great player. He makes plays like that,” Stefanski said. "You’ve got to try and find a way to get him on the ground. And you know you’ve got to cover your guy for a very long time when you’re playing him.”

That's one of the things the Browns will work on during the bye week. That, and figuring out a way to get back in the playoff hunt.

“I think we all are very frustrated. It stings," Stefanski said. "We did some really good things. The defense taking the ball away four times. But then we get no points off it. The bottom line is, we will come in, we will look at it, we will learn from it, and then we’ve got to get ready for a stretch run.”