One play after Baker Mayfield completed a 41-yard pass, a long gain that gave the Browns momentum and their banged-up quarterback some needed confidence, coach Kevin Stefanski called a trick play.

With a chance to latch onto a wild-card spot and close the gap on AFC North-leading Baltimore, the Browns failed to take advantage of intercepting Lamar Jackson four times and stumbled to a 16-10 loss Sunday night — a setback that perhaps revealed some deeper issues in Cleveland. 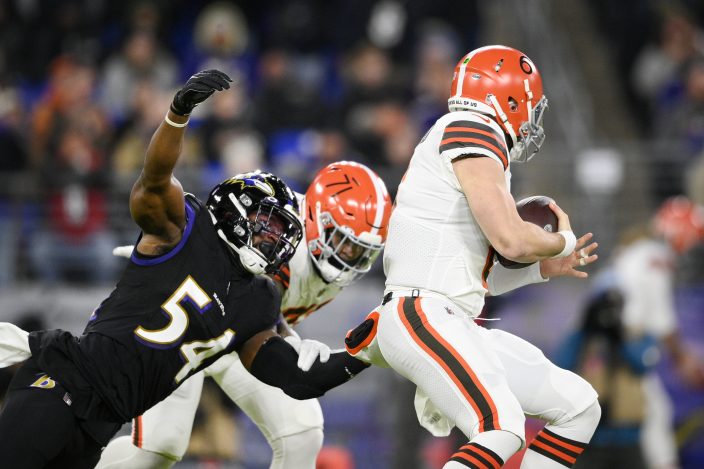 The Browns (6-6) reached their bye in bad shape, broken and bewildered.

On Monday, Stefanski said he and his coaching staff will spend this week dissecting what his team does well and where it needs to make immediate improvements before seeing the Ravens again on Dec. 12.

There's still time to save a season that started with Super Bowl chatter, but it's quickly slipping away.

The Browns have issues galore. Stefanski said he has no plans to hand over play-calling duties to anyone or bench Mayfield, who has played hurt for weeks but survived a matchup against the Ravens without suffering any new malady.

“Baker is our starting quarterback," Stefanski said. "He's healthy and getting healthier. We just need to be better as an offense. Baker needs to play better. I have to coach better. We have to block better and we have to run routes better.

"All of the above is true. We just have to be better both individually and collectively.” 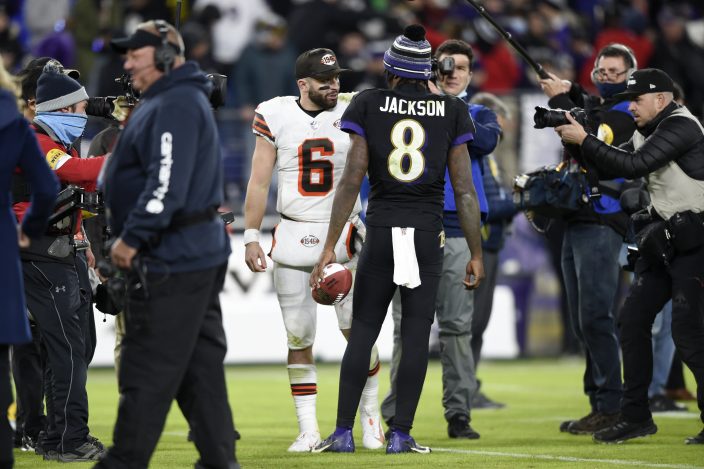 As is always the case, Mayfield's performance — 18 of 37 for 247 yards with one TD —- is being micro-analyzed because he didn't make enough plays to deliver a comeback victory on a night where Jackson looked vulnerable and beatable.

But this wasn't on Mayfield as the Browns were held to a season-low 40 yards rushing, and Cleveland's receivers couldn't get away from the Ravens' aggressive defensive backs.

If there's any division among Cleveland's players about Mayfield, they're keeping it private.

“We’re confident in him,” guard Joel Bitonio said. "I know it’s a quarterback-driven league, but not everything’s on that guy. It’s tough when he’s running for his life on a play or other people aren’t open.

“Obviously, he’s the face of the team, so there’s a lot of responsibility that goes on that position, but we’re confident. We understand there’s 11 guys on the field and there’s coaches and people putting us in position. But we have not wavered on Baker Mayfield.”

For all the offensive ineptitude, Cleveland's defense has been steady for weeks. Coordinator Joe Woods, who was under fire earlier in the year, pushed all the right buttons as the Browns harassed Jackson all night and forced four takeaways.

On the long list of problems, defense is near the bottom.

The formula to beat the Browns is simple: Stop the run. The Ravens didn't respect Mayfield and stacked the line, which is exactly what Arizona, Pittsburgh and New England did in wins over Cleveland.

The lack of a bona fide No. 1 wide receiver deprives Stefanski and Mayfield of a big-play target they can count on. Cleveland's receivers in general aren't getting enough separation, forcing Mayfield to hold the ball longer than he should.

Rookie linebacker Jeremiah Owusu-Koramoah was everywhere while helping contain Jackson. He finished with a career-high 12 tackles, made a tackle for loss and was credited with a half-sack.

The second-round pick is finally fully healthy after missing three games with an ankle injury.

The NFL's Coach of the Year in 2020, Stefanski is having a sophomore slump. It's not just his play selection that's been questionable, either. The Browns have been one of the league's most-penalized teams and they had issues against the Ravens in getting 11 players on the field a few times.

Two-time All-Pro Jack Conklin suffered a season-ending knee injury, a huge loss for Cleveland's struggling offense. Conklin tore his right patellar tendon and will need surgery. Stefanski wouldn't speculate whether he'll be ready for training camp. ... TE Harrison Bryant will likely miss a few weeks with a high ankle sprain. He had three catches for 50 yards before getting hurt. ... RB Kareem Hunt should be fine after his calf tightened and kept him off the field for Cleveland's final possession. Hunt missed five games with a calf sprain.

16 — The Browns' scoring average over the past seven games, a number that would be significantly lower if not for a 41-point performance against Cincinnati on Nov. 7.

A chance to get healthy and regroup. The Browns remain in the hunt for a playoff spot, but they've lost any margin for error entering a rugged five-game stretch against Baltimore, Las Vegas, Green Bay, Pittsburgh and Cincinnati.