It was hard to tell Sunday — and the Colts paid a hefty price for breaking with that identity.

Carson Wentz was picked off twice and lost a fumble on a strip-sack as Indy blew another double-digit lead in a 38-31 loss to defending Super Bowl champion Tampa Bay. Reich insisted Monday he had no regrets. 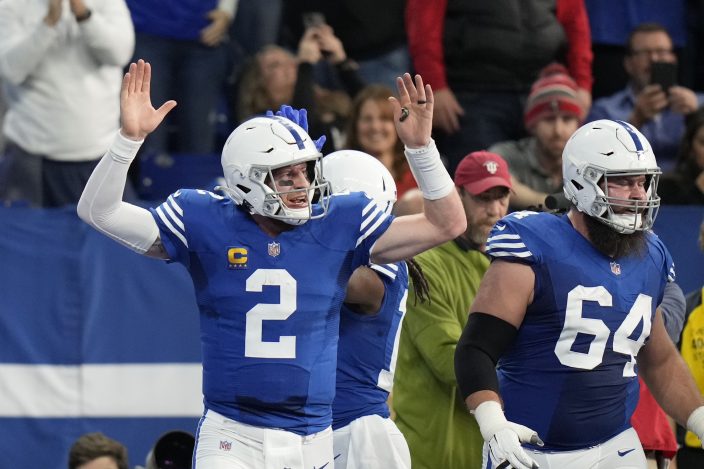 Indianapolis Colts quarterback Carson Wentz (2) reacts after throwing a touchdown to Indianapolis Colts' T.Y. Hilton during the first half of an NFL football game against the Tampa Bay Buccaneers, Sunday, Nov. 28, 2021, in Indianapolis. (AP PhotoAJ Mast)

“I didn’t have very many regrets on how this game was called, I’m not going to lie," he said. “Do you want to call one or two more runs? Yeah, sure. But we were going against the No. 1 run defense and they came out with the mindset Jonathan Taylor is not going to beat us, they’re going to have to throw the ball to beat us."

Wentz dropped back 50 times. He completed 61.4% of his 44 throws, was sacked three times, and scrambled three times for 21 yards.

The approach relegated Indy's best offensive threat, running back Jonathan Taylor, to a smaller role. He had 16 carries for 83 yards and one score while catching four passes for 14 yards. With 20 touches and 97 yards from scrimmage, Taylor wound up three yards short of breaking the NFL record with a ninth straight 100-yard game and a rushing TD. 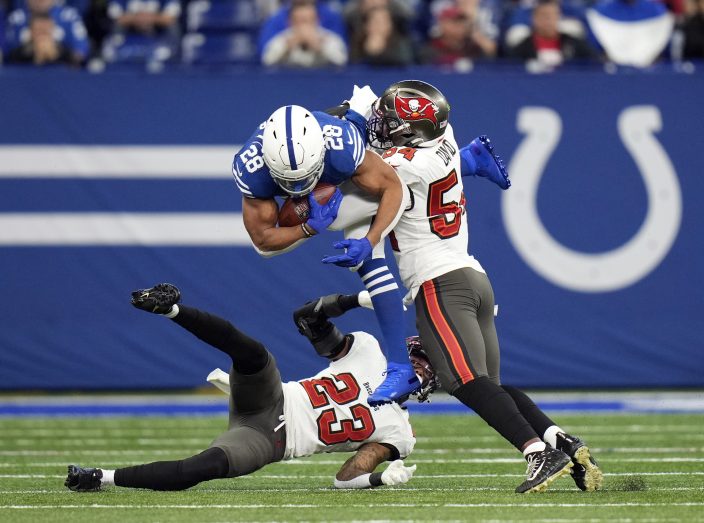 But half of Taylor's carries came on Indy's second-to-last possession and Wentz only threw his way five times. On one rare early handoff to Taylor, fans cheered loudly.

While the pass-heavy calls helped the Colts take a 24-14 halftime lead, that approach also led to the turnovers that erased two scoring chances, negated Taylor's impact and Indy's ability to control the clock. Reich believes the run-pass options will continue to play a key role in Indy's success — even if he does look for more ways to keep Taylor involved.

“It’s like Chris (Ballard) and I said, there’s something about calling downhill runs that have no other option," Reich said, referring to the Colts general manager. “ I understand that’s a big part of the game and that’s a part of who we are, so we're going to continue to mix that in. But I really felt like against this team we were going to have to throw it a little bit more than we usually do." 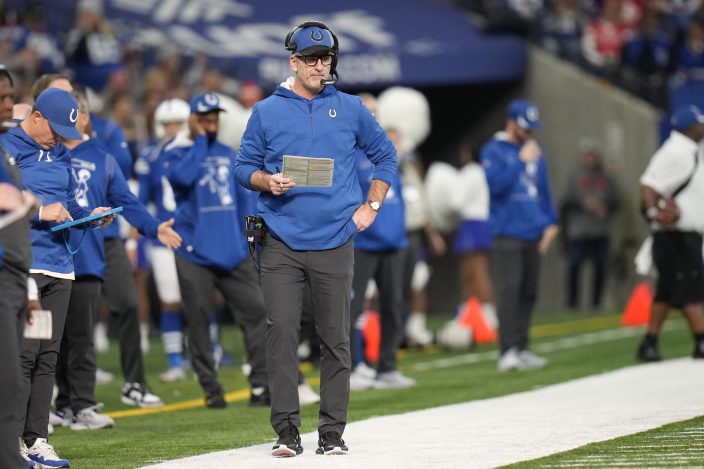 Indianapolis Colts head coach Frank Reich looks on during the first half of an NFL football game against the Tampa Bay Buccaneers, Sunday, Nov. 28, 2021, in Indianapolis. (AP PhotoAJ Mast)

Scoring. The Colts have scored at least 30 points in seven of their last eight games including 72 over the last two weeks against Buffalo and Tampa Bay, two of the league's top defenses. 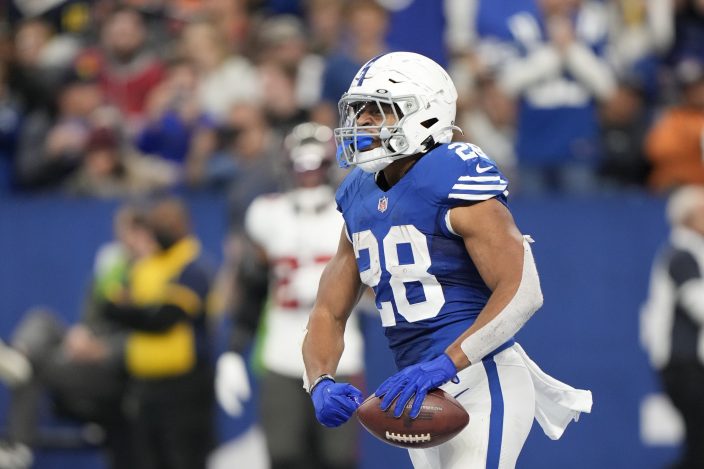 Indianapolis Colts' Jonathan Taylor reacts after a touchdown run during the second half of an NFL football game against the Tampa Bay Buccaneers, Sunday, Nov. 28, 2021, in Indianapolis. (AP PhotoAJ Mast)

Turnovers. Indy leads the NFL with a plus-12 turnover margin but had five of its 15 giveaways Sunday. Each proved costly as the Bucs scored 24 points off the first four and sealed the win with the final interception.

T.Y. Hilton and Jack Doyle. The long-time veterans showed they're still reliable. Hilton had four receptions for 28 yards and scored his first TD of the season Sunday. Doyle caught six passes for 81 yards, both season highs, and had his third TD in five weeks. They can help the passing game improve if they remain consistent options.

Scoring defense. Sure, the Colts were playing Tom Brady and, yes, it seemed Indy's defense was on the field for long stretches in the second half. But it gave up 38 points and again failed to protect a second-half lead. Indianapolis is yielding 23.6 points per game, barely cracking the league's top 20.

DeForest Buckner, a 2020 All-Pro defensive tackle, left late in the first half with an injured right knee. He returned in the second half and Reich said Monday he's “pretty banged up." Reich called him day to day and did not say whether starting safety Khari Willis may be activated from injured reserve this week.

101 and 93 — Linebackers Bobby Okereke and Darius Leonard have a friendly competition going for leading the team in tackles. Leonard forced another fumble Sunday and had 15 tackles to become the sixth player in franchise history with 500. He also closed the gap with Okereke, who leads 101-93 this year.

After blowing a chance to cut a two-game deficit in the AFC South to one, the Colts must take advantage of next weekend's trip to Houston. They'll get a much-needed bye the following week before hosting New England and visiting Arizona. The four-week span will play a key role in determining whether Indy stays in the playoff hunt.

Colts looking for ways to maintain momentum through bye week

Colts use blowout in Buffalo to prove they're playoff ready

Reich wants Indy to use lessons learned for playoff run