Going into the start of the season, many people would be happy to see the Los Angeles Chargers with a 6-5 record and in contention for a playoff spot going into December.

Now that record is considered to be disappointing.

Wins in four of the first five games, including three against teams that made the postseason in 2020, ramped up expectations for first-year coach Brandon Staley. But Sunday's 28-13 loss to the Denver Broncos was the Chargers' worst game since a 45-0 blowout defeat against New England last December that sealed then-coach Anthony Lynn's fate. 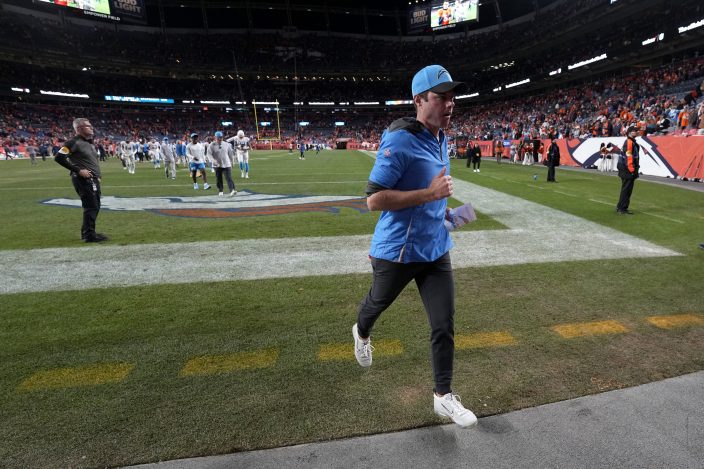 The loss to Denver was Los Angeles' fourth in the past six games and laid bare many of its weaknesses seen throughout the season — a leaky run defense (147 yards allowed and 4.5 yards per carry); too many third-down conversions allowed (8 of 11); and an offensive line missing three starters unable to consistently protect quarterback Justin Herbert.

Herbert threw for 303 yards, but he threw two crucial interceptions, one in the end zone, another returned by Patrick Surtain II for a 70-yard pick-6.

The only good thing that happened for the Chargers is that they remained in the seventh and final AFC postseason spot after Cleveland lost to Baltimore. Los Angeles, Las Vegas and Denver are all 6-5, but the Chargers have the spot by virtue of a better division record. Sunday's trip to Cincinnati begins a stretch in which four of the Chargers' final six games will be against teams that still harbor postseason hopes. Besides the Bengals, who are in playoff position at 7-4, Los Angeles also faces division foes Kansas City, Denver and Las Vegas.

“This is where we are. Could it be better? Yeah, it could be, but it could be worse,” Staley said. “We have to keep our head on straight, keep our composure and be better moving forward. We’re in a fight. It’s been that type of season for us. You’ve heard me talk about illusions and stuff like that, it was a fight when we were 4-1, and it’s still a fight. So we’re going to try and stay connected and move on to Cincinnati.”

Keenan Allen has four straight games with at least seven receptions and tied Antonio Brown as the fastest player to reach 700 career catches (111 games). Allen's 36 receptions are tied for the most in the league over the last four games.

The offense was on a roll on fourth-down conversions the first five weeks of the schedule when it converted all seven of its opportunities. But it has regressed the last six games, going 5 of 12, including 1 of 2 against the Broncos. The 41.7% success rate since Week 6 is below the league average of 53.8%.

After coming close a couple times the past three games, Derwin James picked off his second pass of the season. He is the fifth defensive back since 1982 to have five sacks, five interceptions and three forced fumbles within the first 35 games of a career.

The Chargers could be in trouble if Feiler has to miss multiple games. They went into the season with four new starters on the offensive line, but right tackle Bryan Bulaga hasn't played since the opener due to back issues, and right guard Oday Aboushi suffered a season-ending knee injury on Oct. 10 against Cleveland.

3 — interceptions thrown by Herbert once the Chargers reach the opponent's 25-yard line, which is tied for second in the NFL.

The Chargers travel to Cincinnati in what will be the first matchup between Herbert and Joe Burrow, first-round draft selections in 2020. Los Angeles needed a missed field goal in the final minute of last year's opener for a 20-17 victory.

Chargers starting to display depth at crucial time in season

Chargers' defense finally rises to occasion when needed most