Days after firebrand conservative Rep. Lauren Boebert of Colorado was harshly criticized for making anti-Muslim comments about Rep. Ilhan Omar, a Minnesota Democrat whom she likened to a bomb-carrying terrorist, the two spoke by phone Monday.

By both lawmakers' accounts, it did not go well.

The conversation, which Boebert sought after issuing a tepid statement last Friday, offered an opportunity to extend an olive branch in a House riven by tension. Instead, it ended abruptly after Boebert rejected Omar's request for a public apology, amplifying partisan strife that has become a feature, not a bug, of the GOP since a mob of Donald Trump supporters stormed the Capitol on Jan. 6. 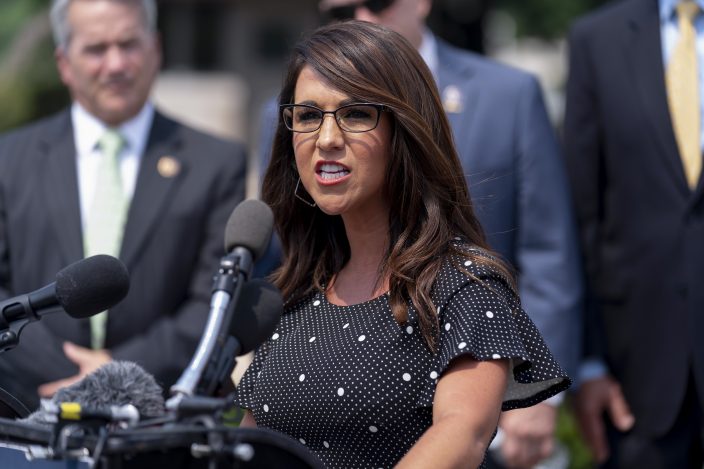 Boebert previously apologized “to anyone in the Muslim community I offended," but not directly to Omar.

It's just the latest example of a GOP lawmaker making a personal attack against another member of Congress, an unsettling trend that has gone largely unchecked by House Republican leaders. It also offers a test of Democrats' newfound resolve to mete out punishment to Republicans.

Earlier this month conservative Rep. Paul Gosar of Arizona was censured over a violent video. In February Rep. Marjorie Taylor Greene of Georgia was booted from congressional committees for her inflammatory rhetoric.

After Monday's phone call, Omar and Boebert quickly issued statements condemning each other.

“I believe in engaging with those we disagree with respectfully, but not when that disagreement is rooted in outright bigotry and hate,” Omar said in a statement. She said she “decided to end the unproductive call.”

Boebert shot back in an Instagram video: “Rejecting an apology and hanging up on someone is part of cancel culture 101 and a pillar of the Democrat Party."

The chain of events was set in motion over a week ago when Boebert posted a video to Facebook of her speaking before constituents, describing an interaction with Omar — an interaction that Omar maintains never happened.

In the video, the freshman Colorado lawmaker claims that a Capitol Police officer approached her with “fret on his face” shortly before she stepped aboard a House elevator and the doors closed.

“I look to my left and there she is — Ilhan Omar. And I said, ‘Well, she doesn’t have a backpack. We should be fine,’" Boebert says with a laugh.

Omar is Muslim. Boebert's comment about Omar not wearing a backpack was an apparent reference to her not carrying a suicide bomb.

Reaction to the video was swift. Omar called on House Speaker Nancy Pelosi and Republican Minority Leader Kevin McCarthy to “take appropriate action” because “normalizing this bigotry not only endangers my life but the lives of all Muslims. Anti-Muslim bigotry has no place in Congress.”

Yet McCarthy, who is in line to become House speaker if Republicans retake the majority next year, has proven reluctant to police members of his caucus whose views are often closely aligned with the party's base.

Pelosi spokesman Drew Hammill said the speaker had nothing new to add Monday and pointed to the statement issued by Democratic leaders last week calling on McCarthy to act.

Boebert tweeted Friday that “I apologize to anyone in the Muslim community I offended with my comment about Rep. Omar," adding that "there are plenty of policy differences to focus on without this unnecessary distraction.”

It's not Boebert's first brush with controversy — nor Omar's. Since Boebert's election to Congress in 2020, she has leaned in to provocative broadsides that delight the party's base. Omar has drawn her focus in particular. She has previously called Omar and others “full time propagandists" for "state sponsored terrorism,” and “politicians with suicide belts strapped their body.”

In May, she tweeted that Omar was “a full-time propagandist for Hamas.” She has also called Omar and Michigan Rep. Rashida Tlaib "evil” while also referring to them as the “jihad squad.” Tlaib, like Omar, is Muslim.

Omar too has drawn scrutiny for her comments, often in reference to Israel, some of which have been blasted as anti-Semitic.

In 2019, she suggested that Israel’s supporters are pushing U.S. lawmakers to take a pledge of “allegiance to a foreign country.” She was also pressured to apologized “unequivocally” for suggesting that congressional support for Israel was “all about the Benjamins baby,” a longstanding trope about Jews buying influence.