So much for the notion that the Tampa Bay Buccaneers were beginning to show some signs of vulnerability.

The defending Super Bowl champions not only have won two games in a row to improve the NFC’s third-best record to 8-3, they are confident they’re progressing toward becoming the dominant team they’re capable of being.

“It shows who we could be,” said linebacker Shaquil Barrett, whose strip-sack and fumble recovery was the turning point Sunday in a 38-31 come-from-behind victory over the Indianapolis Colts, who were up 10 points and threatening to score again when Barrett swung momentum early in the third quarter. 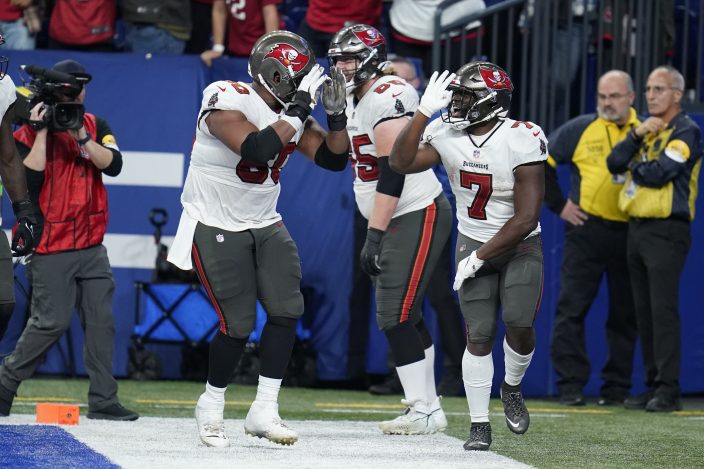 Tampa Bay Buccaneers' Leonard Fournette (7) celebrates a rushing touchdown during the second half of an NFL football game against the Indianapolis Colts, Sunday, Nov. 28, 2021, in Indianapolis. (AP PhotoMichael Conroy)

“The game is 60 minutes long. It’s not 30, it’s not 25. We go and play 60 and see what happens,” coach Bruce Arians said. “We came out and we made what we needed to. We needed something good to happen to us, and we did, and it snowballed.”

The team’s two-game winning streak comes on the heels of a pair of road losses wrapped around a bye week that made the skid seem longer.

Turnovers and costly penalties largely were to blame for losses at New Orleans and Washington. The win at Indianapolis evened Tampa Bay’s road record at 3-3.

“It wasn’t pretty in the first half. It never is on the road,” Arians said Monday. “You’ve just got to find ways to keep winning games.”

That didn’t happen at New Orleans or Washington, where Tampa Bay didn’t play well enough or — in Arians’ words — smart enough or with the sense of urgency needed to be successful.

The Bucs forced five turnovers, four after halftime against the Colts. They were flagged for just four penalties, a season low on the road.

Leonard Fournette rushed for 100 yards and three touchdowns, including the clinching score with 20 seconds remaining. He also caught Tom Brady’s only TD pass, finishing with seven receptions for 31 yards.

Teammates were impressed, too, with a brief speech the fifth-year running back delivered in the locker room with the defending champs trailing 24-14 at halftime.

Without providing details, tight end Rob Gronkowski said Fournette’s words “got everyone fired up ... and he went out there and backed it up, too.”

“Just to come together as a team and get a road victory like that definitely brings the team together,” Gronkowski added. “It brings us closer. And from there, you just have to keep building and stacking them.”

Fournette has always been known as a punishing runner. He’s taken on a bigger role in the passing game in his second year playing with Brady. Through 11 games, he’s rushed for 621 yards and seven TDs and is second on the team with 51 receptions for another 354 yards and one TD.

With guard Ali Marpet sitting out with an abdominal injury, things got worse for Tampa Bay’s offensive line at Indianapolis, when backup Aaron Stinnie left in the first quarter. That left third-stringer Nick Leverett to fill in. Leverett was far from perfect, but played well enough that Arians said he was given a game ball.

The Bucs lead the NFL in run defense. They’ve been so good against the run that opponents rarely even attempt to test them. The Colts were no different, even though Indianapolis has league rushing leader Jonathan Taylor. Taylor finished with 83 yards on 16 attempts, but the pass-happy Colts didn’t really get him involved until they fell behind 31-24 in the fourth quarter. Taylor carried eight times for 58 yards and a touchdown on a 10-play, 75-yard drive that tied it 31-all.

It’s difficult to find fault with any aspect of the win over the Colts, who have been one of the hottest teams in the NFL over the past month. The Bucs did make the closing seconds more suspenseful than they needed to be, though, after Fournette’s fourth TD put Tampa Bay ahead for good.

Indianapolis’ Isaiah Rodgers returned the ensuing kickoff to the Bucs 32, giving Carson Wentz 10 seconds to try to get the ball into the end zone to force overtime.

Fournette’s eight TDs this season are his most since he scored 10 as a rookie with the Jacksonville Jaguars in 2017.